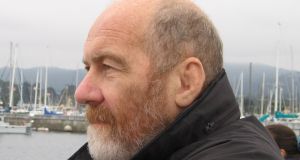 John Throne made his mark by founding and building the ‘militant tendency’ in Ireland, the precursor of today’s Socialist Party

The road from John Throne’s home, the smallholding outside Lifford, Co Donegal, took him on a long and unlikely, winding course, geographically and politically: a small farmer from a Protestant, very Orange family who would end up travelling the world preaching Marxism and Trotskyism.

Throne who has died in Chicago at the age of 75, plunged into a life of full-time socialist political activism after participating in Derry’s “battle of the Bogside” in 1969.

He quickly became a central figure in the hothouse of Ireland’s far-left politics in the 1970s, and a thorn in the side of the leadership of the Labour Party, on whose executive he served before expulsion in the early 1990s.

He made his mark by founding and building the “militant tendency” in Ireland, the precursor of today’s Socialist Party, a group determined to create a hard-left alternative to republicanism by promoting workers’ unity.

In the process he recruited into revolutionary politics, among others, former MEP Joe Higgins, TD Michael Barry, and, for a time, Jack O’Connor, former president of Irish Congress of Trade Unions.

The former is a moving account, loosely-based on his grandmother’s grim experience of the “hiring fairs” of Donegal and Tyrone in the 1920s. Sold into a life of unpaid servitude, living worse than farm animals, the teenager was raped by a local farmer before being married off to another. She died in her 20s after producing five children.

The book, written in her voice, sold over 27,000 copies, mainly in the two counties.

In A Cup of Kindness, Throne colourfully traces his life, from growing up in Lifford and his dawning interest in politics, to a rupture with most of his family after The Donegal Woman was published.

Much of the book is an exposition of his conviction about the continuing relevance of Marxism and a lengthy repudiation of the rationale for his eventual purge in the 1990s from the organisation he helped set up and the international group to which it is affiliated, the Committee for a Workers’ International (CWI).

He spent recent years in the US trying to build a new loose-knit discussion platform for the revolutionary left – its blog, Facts for Working People, is largely a critique of the centralist and antidemocratic organisational methods which he acknowledges characterises much of the Marxist left.

He was born in 1944 to Robert Throne and Margaret Oliver on the farm which he writes was “big enough to keep our heads above water but not big enough to keep the adults from worrying that someday the whole thing might sink. My mother was always talking about the workhouse and worried we might end up there.”

His father died at 50 of hypothyroidism and Addison’s disease, which ended Throne’s own life.

He left school at 16 to work on the farm, but became determined to break away from what he saw as a stifling life. He set off for Canada, where he found a job in a mine and then joined up as a deckhand on ships that took him as far afield as Poland, Brazil, Panama, Vietnam, the Philippines and Australia.

“In Western Australia. I was picked up by the owner of a carnival which travelled from town to town. I worked for him operating his big Ferris wheel for a time. For a time I worked on a crayfish boat . . . before returning to Europe via Egypt.”

Before the events of 1969 he made a living in Lifford, in part on the farm, and “ a job driving and helping the local vet. He drank too much and had a bad heart. He taught me how to horn and castrate animals,” – a service he provided for many of his neighbours.

But he also, as he would admit wryly, smuggled or poached salmon. “The biggest catch was 85 salmon on one night,” he wrote, enough to fund a move to Dublin to avoid imminent internment by the British.

The militant was soon able to afford a minimal salary and he continued his organisational work until he went to work for the CWI internationally, finishing up in the US where he was eventually purged.