Lives Lost to Covid-19: Working at St James’s Gate for 40 years, he made many friends 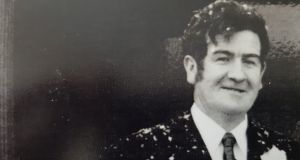 John Burns could have been a farmer were it not for the Guinness barge that sailed into his hometown of Shannonbridge during his youth.

His father sold barley to the barge that travelled down from the Liffey and the Grand Canal, through Lough Derg and the Shannon and on to Limerick.

Wishing for a better life for his son, he enquired about getting a job for John at the brewery in Dublin.

Born into a large family in the village of Clonfert in Co Galway in 1935, John moved in with his uncle’s family in the parish of Moore – a townland on the Co Roscommon side of Shannonbridge – and was raised there alongside his grandmother and cousins.

His mother cycled over to see him every Sunday and he maintained a close relationship with his parents, siblings and his cousins for his entire life.

At the age of 18 he moved to Dublin to take up his position in Guinness, working across all sections from the brewhouse to security during his more than 40-year employment there.

“He made lifelong friends there,” says Damien, who remembers going to the swimming pool at St James’s Gate with his dad, as well as the “great medical scheme” the company afforded them.

I always felt safe with him. He always looked after us. He adored us and we absolutely adored him

John rented a room in the city when he first came to Dublin in the early 1970s, and it was here his landlady introduced him to her niece Pauline.

He fell in love with the Offaly woman and they married shortly after, buying a house in Palmerstown and having four children: Claire, Damien, Gemma and Cathal.

“He was very supportive, he was always there rain, hail or shine – he’d be there to support you. He was a very proud man, no matter what you did. He adored my mam and she adored him,” Damien says.

“I always felt safe with him. He always looked after us. He adored us and we absolutely adored him.”

John was a cross-country runner with Moore Athletic in Roscommon in his younger years, but was later known for walking the roads of Palmerstown.

“He was a massive part of local life in Palmerstown, he would walk the length and breadth of it. If people didn’t know him to talk to, they’d know him to see,” Damien says.

He loved sport, particularly the GAA. He supported his local club, St Pats, but also had a soft spot for Offaly football.

“I remember when Kerry played Offaly in the 1982 All-Ireland final, I thought he was going to put his fist through the roof he jumped so high when Seamie Darby scored that goal . . . absolutely delighted!”

He loved to tell stories, jokes and riddles, and knew how to have fun with the neighbours, many of whom became lifelong friends.

John liked to play cards, going to the West County Hotel in Chapelizod every Monday night to play 25.

He and Pauline loved country music. “There used to be a station called Treble TR they religiously used to listen to. It was a ritual,” Damien says.

John suffered from dementia and Parkinson’s toward the end of his life, and died from Covid-19 at Marymount Care Centre in Lucan on April 10th, 2020.

Damien visited his grave in Celbridge the night before this interview, and could smell the hops from a brewery nearby. He says this is how he will remember his father: how he was during his prime at St James’ Gate.