Kennedy’s patience, caution and willingness to compromise helped to avert disaster and stands as an example of imaginative diplomacy that remains salutary today 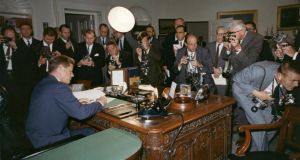 President Kennedy signs a proclamation for the interdiction of the delivery of offensive weapons to Cuba at the White House on October 23rd, 1962. 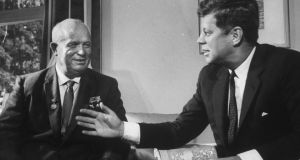 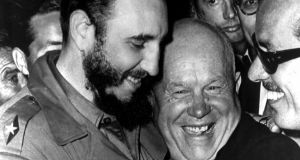 John F Kennedy’s reputation, which soared after his assassination, remained exalted enough for more than three decades to keep him ranked in the top 10 in most surveys of US presidents. But in recent years, the 35th president’s stock has fallen as revelations about his sexual appetite tarnished the Camelot myth and a new generation of historians dismissed his legislative achievements as slight. His timidity over civil rights has drawn unfavourable comparison with the more effective action of his successor Lyndon B Johnson and his espousal of tax cuts and other business-friendly economic policies has led some to suggest that far from being a liberal icon, Kennedy was in fact a conservative president.

One part of Kennedy’s reputation has grown in stature, however, as documents released long after his death have cast a new light on his handling of the Cuban missile crisis, a stand-off between the US and the Soviet Union in 1962 that brought the two superpowers to the brink of an all-out nuclear war. Kennedy’s patience, caution and willingness to compromise with his Soviet counterpart Nikita Krushchev helped to avert disaster and stands as an example of imaginative diplomacy that remains salutary today.

Kennedy’s behaviour during the crisis is all the more remarkable given that he came to office as an unscrupulous Cold War hawk, who had falsely accused the Eisenhower administration of allowing a “missile gap” to develop in Moscow’s favour. There was indeed a gap but it was overwhelmingly in favour of the US, which had 20,000 nuclear warheads in 1960, compared to the Soviet Union’s 1,600. In his inaugural address on January 20th, 1961, Kennedy gave a robust commitment to defending American values abroad in what was to become one of the most celebrated passages in the speech, but sounding to Soviet ears like a threat rather than a promise:

“Let every nation know, whether it wishes us well or ill, that we shall pay any price, bear any burden, meet any hardship, support any friend, oppose any foe, in order to assure the survival and success of liberty.”

On taking office, Kennedy went ahead with a plan hatched by his predecessor to deploy intermediate-range nuclear missiles in Italy and Turkey, ratcheting up the threat to the Soviets. He also approved a CIA plot to invade Cuba and topple Fidel Castro, who had overthrown the US-backed dictator Fulgencio Batista. Kennedy knew that the invasion could go wrong and feared that it could damage his budding relationship with Krushchev, with whom he had established a secret back channel correspondence. So he gave the CIA the green light, but in an effort to ensure deniability, withheld the military support that could have made it a success. The invasion was a fiasco and all those who landed at the Bay of Pigs were captured or killed, but Kennedy made matters worse when he denied to Krushchev that the US had been involved, provoking a sharp response from the Soviet leader, who said that the entire world knew that Washington had planned, financed and transported the Cuban exiles who carried out the invasion.

The building of the Berlin Wall in August 1961 and a resumption of nuclear testing by the Soviets a few months later heightened tension further, prompting the Americans to resume testing too. Krushchev sought to gain a strategic advantage with a covert plan to install intermediate-range nuclear missiles in Cuba, just 90 miles off the coast of Florida, sending a great convoy of ships to transport the weapons. When US surveillance discovered signs of a military build-up in Cuba, Kennedy responded with a promise that “the United States would act” if Cuba developed a capacity for offensive action against it. On October 15, 1962, US spy planes reported that some missiles were already installed on Cuban soil and that more were on the way.

For the next 13 days, Kennedy sought to manage the crisis with a special committee of military and security advisors and other senior officials, including his brother Robert, the attorney general. They agreed immediately that the weapons had to go and the military advisors advocated an attack on the Soviet installations in Cuba – a move that could have triggered a Soviet attack on West Berlin or sparked a nuclear response that could have set off a full-scale nuclear Armageddon.

Instead, Kennedy ordered a naval blockade to prevent Soviet ships approaching Cuba, a step that bought time for a diplomatic resolution. The US president had recently read Barbara Tuchman’s The Guns of August, a popular account of the mistakes, miscalculations and mutual misunderstandings that led to the first World War. He told Krushchev that, if the missiles were withdrawn, the US would pledge not to invade Cuba, thus allowing the Soviet leader to claim he had won a concession from Washington. And in a secret deal, that was not revealed until 20 years after his assassination, Kennedy promised that within months he would withdraw the US intermediate-range missiles from Turkey. This further concession may not have been necessary to end the crisis but it demonstrated Kennedy’s capacity to understand what his Soviet interlocutor needed to pave the way for progress in US-Soviet relations.

A year after the missile crisis, Washington and Moscow signed a treaty that banned most nuclear weapons testing and in the months before his death, Kennedy’s rhetoric had transformed from that of a Cold War firebrand to an eloquent advocate of global peace. And during his visit to Ireland in June 1963, he used a speech to the joint houses of the Oireachtas to argue that peace is a choice available to mankind at any time.

“Indeed, across the gulfs and barriers that now divide us, we must remember that there are no permanent enemies,” he said. “Hostility today is a fact, but it is not a ruling law. The supreme reality of our time is our indivisibility as children of God and our common vulnerability on this planet.”