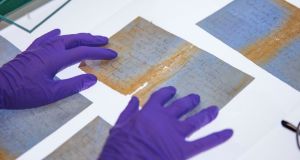 The fragments of a 1941 love letter to a woman named Iris, found nearly 5km under the ocean in a shipwreck off the Irish coast, have been painstakingly pieced together by experts, 80 years after it was posted.

“Look after yourself my darling, not only for your own sake... for mine also,” wrote the unknown serviceman stationed in the Waziristan region, now part of Pakistan. “Imagine that I have my lips tight against yours with my arms around you tight… let us hope that this bloody war will soon be over.”

The letter is one of 717 that were never delivered by the SS Gairsoppa cargo ship, which was torpedoed as it headed towards Ireland by a German U-boat on February 16th, 1941. Of the 86 crew on board, only one survived.

The Gairsoppa had been on its way from Calcutta to Liverpool with a consignment of silver to aid the British war effort in February 1941. The merchant vessel failed to rendezvous with an Atlantic convoy and, running low on fuel, decided to divert in rough seas to Galway.

The ship lay nearly 5km deep, about 500km southwest of Mizen Head, until 2011, when Odyssey Marine Exploration, a US firm that won the contract from the British government in 2010 for salvage, discovered it. The company recovered more than 100 tonnes of silver from the wreck, along with the letters, which stayed mostly intact because they had been sealed within the hold under tons of mailbags and sediments, protected from light, currents, heat and oxygen.

“It’s an anaerobic environment, so the corrosion is slowed down completely. And because there were so many mailbags together, a massive percentage of the whole post-office mail would have been destroyed, but a central part of all this big bundle of mailbags has survived – just 700-odd letters. There would have been so many more,” says conservator Eleni Katsiani.

One letter-writer sends his son some fatherly encouragement: ‘Your handwriting in your last letter is much better than I’ve ever seen it keep it: well done: keep it up and try to improve your spelling’

A handful of the more complete letters from the ship were displayed in an exhibition at the British Postal Museum, in London, in 2018; the museum’s archive team have been working on some of the more damaged missives over recent months, piecing together fragments to reveal glimpses of wartime lives.

The letters were immediately freeze-dried after the discovery, to stop the decay process, then washed in freshwater to desalinate them, says Katsiani, “an intense and time-consuming process for each letter but one that secured their current condition.”

The Postal Museum’s senior paper conservator, Jackie Coppen, came across the letter to Iris, which she describes as “a tender testament to love and longing”, written on “incredibly thin and fragile” paper.

“Like many of the letters it has suffered, but, despite missing areas, enough remains to appreciate the sentiments,” Coppen says. “It talks of hope and the future; it professes dreams of embracing tightly and being together again. Not only does it evoke a romantic past, when the handwritten word sent through the post was often the only means of sustaining long-distance relationships, but it is particularly pertinent in present times, when many of us, longing to embrace our own loved ones, have also reverted to the written word as a means of reaching out.”

Two other letters are from a father to his daughter and son at Hotel Inglewood in Torquay, on the southwestern coast of England, where the museum believes they may have been evacuated, written on December 1st, 1940. The father writes to his daughter Pam: “You can be quite sure that mummy will send you back to Wycombe as it becomes practical politics. Meanwhile we all have to make the best of things as they are: the war has upset most peoples dreams and modes of living – including mine!”

He sends his son Michael a collection of used stamps from around the world, along with some fatherly encouragement: “Your handwriting in your last letter is much better than I’ve ever seen it keep it: well done: keep it up and try to improve your spelling.”

“He also writes about how he’s happy his son is enjoying his bike, and how he’s pleased he’s going to be joining the Cubs,” says Katsiani. “It’s such a nice letter.”

Fewer than half of the letters have now been worked on by the conservators, giving, as the museum puts it, “insight into the lives of ordinary people, living in extraordinary circumstances” during the second World War.

“There were missionaries, business people, soldiers and generals writing, ordinary travellers who had gone to India,” says Katsiani. “The letters are talking about life, love, faith, business – and the weather, of course.”

“It feels somewhat poignant and appropriate to be uniting these letters on the 80th anniversary of the ship’s sinking,” says Coppen. “It is inevitable that while piecing the letters together I have come to form an intimate relationship with them – they are mesmerising and capture a remarkable snippet of life during a most significant period.” – Guardian