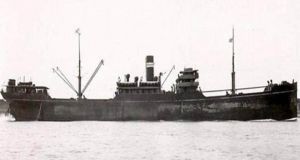 The SS Gairsoppa was on its way from Calcutta to Liverpool with a consignment of silver to aid the British war effort in February 1941 when it was hit by a torpedo and sank.

A merchant vessel that sank off the Irish coast during the second World War has yielded up almost 100 tons of silver worth €56.6 million from its watery bed some 500km (311 miles) off the southwest coast in international waters.

The SS Gairsoppa was on its way from Calcutta to Liverpool with a consignment of silver to aid the British war effort in February 1941. The merchant vessel failed to rendezvous with an Atlantic convoy and, running low on fuel, decided to divert in rough seas to Galway.

It was attacked by a U-boat and sank after being hit in the hold by a torpedo. Only six of 83 crew members and two gunners managed to scramble on to a lifeboat.

Four of them made it to the Cornish coast after 13 days at sea but of these, three drowned before they could be rescued. Only second officer Richard Ayres survived.

The wreck of the SS Gairsoppa was located 5km (3.1 miles) under the sea in 2011 by Odyssey Marine Exploration, a Florida-based salvage company.

Under the terms of Odyssey’s contract with the UK department of transport, which follows standard commercial practices, Odyssey will retain 80 per cent of the net value of the cargo. The contract was awarded to Odyssey following a competitive tender process.

The recovery operations were conducted from a ship called the Seabed Worker, which lowered a remotely operated vehicle capable of working in 5km of water.

The haul has been taken ashore in Bristol and sent to a secure location in the UK. It will be analysed and refined. The recoverable silver will then be melted down and recast into silver bars to be sold.

Odyssey president Mark Gordon said the recovery was a world record both in terms of the size of the haul and the depth from which it was recovered.

“We’re continuing to apply our unique expertise to pioneer deep-ocean projects that result in the discovery and recovery of lost cultural heritage, valuable cargoes and important and needed natural resources,” he said.