‘I know HR is an actual thing, but I struggle to believe it’s real’

How many allegations of sexual harassment are there against Ross O’Carroll-Kelly? 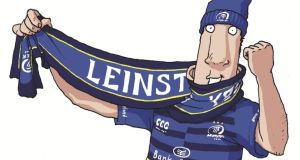 “What’s it going to do for their morale when they see the Rossmeister using the urinal next to them in the staff toilet?”

I walk into the office to discover that all of my most treasured possessions have been stuffed into a cordboard box, which is sitting on my desk. We’re talking my ‘That’s Leinstertainment’ travel mug. We’re talking my 13 letters of censure from the Property Services Regulatory Authority. We’re talking my signed photograph of Richie McCaw (“To Ross,” it says. “You could have been one of the all-time greats,” words which still bring a tear to my eye, even though I told him specifically what to write).

It’s all been packed up, ready for me to ship out. It reminds me of the time that Sorcha threw me out of the gaff. Well, the times.

Lauren is sitting behind what used to be my desk? It’s going to take a lot of getting used to, I have to admit. I pick up the box and she looks at me over the top of her glasses. “What’s with all the sighing?” she goes.

“You were sighing, like a teenager, upset at being asked to-.”

What’s it going to do for their morale when they see the Rossmeister using the urinal next to them in the staff toilet?

“It’s just that it’s a major come-down for me, Lauren. You know, one day I’m the managing director of Ireland’s seventh lorgest estate agent, the next I’m just some randomer at the water cooler. Could we not just move a second desk in here?”

“Yeah, no, a second desk would definitely fit. We could actually share the office.”

“We’re not sharing the office, Ross. You’ve been-.”

“Demoted, I know. Whatever. But I could be the, like, Joint Managing Director – just until I get used to the idea of not being the boss anymore.”

“Ross, I’ve already shown you where your new desk is and I would appreciate it if-.”

“Have you thought about how this is going to affect the rest of the staff, by the way?”

“What I mean is that a lot of the goys in here worship the ground I basically walk on. What’s it going to do for their morale when they see the Rossmeister using the urinal next to them in the staff toilet?”

“I accept that it’s going to require a period of adjustment for-?”

“Well, I’m not going to put them through it, just to let you know. I’m going to use the jacks in Insomnia.”

I pick up my box of stuff and that’s when Lauren ends up saying the most random thing to me? She goes, “Do you think you’re going to have a problem taking orders from-?”

“It’s just that, since you walked into this office, you’ve barely let me finish a-.”

“A sentence. I actually knew you were going to say that.”

Listen to Ross, as read by Paul Howard

And that’s when she suddenly loses it. She actually roars at me. She’s like, “How about you let me say what I want to say without interruption?”

Through the window, I can see the rest of the goys staring in the direction of the office. I’m, like, a hero to them. I really feel for them.

Lauren goes, “Put that box on the floor. I want to say something to you.”

So I put the box down – on a chair, not the floor.

She’s like, “When I took over as Managing Director-.”

“And I’m fully accepting that,” I go. “Sorry, continue on talking.”

“When I took over as Managing Director of Hook, Lyon and Sinker, the first thing I did was ask to see your personnel file. Because I wanted to find out how many allegations of sexual discrimination and harassment there were against you.”

She reaches down and lifts two humungous accordion files onto the desk. My blood turns cold.

“Don’t look so worried,” she goes. “These are the personnel files for the entire company. Do you know what I found in your file, Ross?”

“Should I not have a solicitor present for this?”

“Yeah, no, I’m giving myself a little pat on the back here.”

“Then I wondered had someone removed the contents your file?”

“So I rang Dave – from Human Resources. Why are you smiling?”

Unconscious misogyny? Okay, that makes it sound like it’s not my fault

Look, I know Human Resources is accepted as an actual thing now, but to me it’s like homeopathy or dinosaurs. I still struggle to believe it’s real.

I’m like, “No reason, Lauren. Go on with your talking.”

She goes, “Dave didn’t have a bad word to say about you, apart from having to explain his job role to you two or three times a week.”

“He used to be Payroll, Lauren, then he did a course.”

“He said you’ve actually called out incidences of sexual harassment in the office and dealt with them in a way that he described as ‘textbook’.”

“Not all heroes wear capes, Lauren.”

“Unconscious misogyny? Okay, that makes it sound like it’s not my fault.”

“Well, thank fock for that. Are we done here?”

“You had what I would describe as a rugby education.”

“Okay, you say a rugby education like it’s a bad thing. Can I remind you that your husband was on the same schools cup-winning team as me?”

“I’m well aware of that. And, like you, Christian displays many of the toxic alpha qualities that come from being educated in a single-sex environment. Ross, I want you to go on a course-.”

“A course of what? I’m not taking tablets, Lauren.”

“It’s a Gender Attitude Reconditioning course that I think could really-.”

“Help me? You were going to say help me.”

“-benefit you. If anything, it might teach you that women deserve to have their voices heard every bit as much as-.”

“Men. Yeah, no, I already nearly believe that.”

“Ross, this isn’t going to work unless you face up to the fact that you have problems taking orders from-.”

“From women? I have no problem taking orders from women, Lauren.”

“Good. Because I’ve booked you a place on the course. It starts at eight o’clock on Monday-.”