The dead spy, the drowned MP, the lost canoeist: the people who fake death and why they do it

Russian journalist Arkady Babchenko did it to expose a killer. But most people who fake their deaths are running from something

Arkady Babchenko, the journalist who faked his own death in order to evade what he says was a Russian plot to assassinate him, says pig's blood and a make-up artist were used to help stage the incident. Video: Reuters 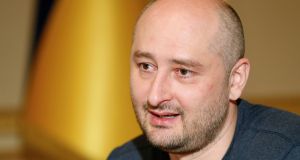 Even the master spy storyteller John Le Carré wouldn’t have tried to get away with the plotline: on Tuesday this week obituaries were being written for the Russian journalist, Arkady Babchenko, following official reports he had been shot dead in the Ukrainian capital, Kiev.

Babchenko had been fiercely critical of Vladimir Putin in his writings and many around the world saw his “assassination” as yet another case of a dissenting voice being silenced by alleged Russian forces.

However, less than 24 hours after his apparent murder made global news, there were audible gasps of shock and surprise when Babchenko was unveiled at a press conference held by Ukrainian police. Unlike Monty Python’s famous parrot – he had certainly not ceased to be.

Babchenko explained that he had staged this own death with the help of the Ukrainian authorities as part of a ruse to track down the people who he claimed were trying to kill him. Such was the secrecy of the plan that not even his wife and children were in on the plan.

As the Babchenko saga rumbles on – with conflicting claims by Ukrainian and Russian media – the Russian journalist is far from being the first person to stage his own death. It’s a dramatic act that usually occurs when the subject is under extreme duress, but it has been done for financial gain and to avoid a prison sentence too.

One of the best known historical examples of someone faking their own death was the curious case of the British MP and junior Cabinet minister, John Stonehouse. On November 20th,1974, the MP left a pile of his clothes on a beach in Miami, giving the impression that he had gone swimming and had drowned or being killed by sharks.

In reality he was on his way to Australia to start a new life, after running into serious financial and marital problems in the UK. But because the story of the missing-presumed-drowned MP made front page news around the world, Stonehouse was recognised by a bank teller in Australia. Arrested and deported back to Britain, he was sentenced to seven years for fraud.

Following his release from prison, he became somewhat of a media personality before his death in 1988. To add further piquancy to his life, it was revealed some years after his death that he had been a paid spy for the Czechoslovak Socialist Republic military intelligence agency.

The US countercultural novelist Ken Kesey received critical and commercial acclaim for his book One Flew Over The Cuckoo’s Nest, published in 1960. A well known face on the bohemian literary scene, Kesey was arrested in 1965 for possession of marijuana. Knowing the offence would get him a prison sentence, he and a group of friends faked his death by leaving his truck on a cliffside road with an elaborate suicide note.

The media readily bought into the story of the great writer’s “death”, but the seasoned California police force always suspected that his death had been staged.

Kesey fled to Mexico in the trunk of a friend’s car but soon tired of life south of the border and returned to the US just eight months later. He was arrested and sentenced to six months. He returned to normal life after his release and continued writing acclaimed books until his death in 2001.

When the British prison officer John Darwin paddled out to sea in his canoe on the east coast of England in 2002, he became the subject of a massive sea and land search after not returning. When the wreckage of his canoe was found a few days later, he was presumed dead.

Darwin, though, was in serious debt after buying two houses for the rental market and had decided that the only way out of his difficulties was to fake his own deaths so that his wife could collect on his life insurance policy. Following his “funeral”, Darwin moved into a bedsit close to his home – and later back into his home proper.

The couple then decided to move permanently to Panama. There were problems though acquiring visas for their supposed new life in Panama, and Darwin flew back to London where he presented himself at a police station claiming he was suffering from amnesia.

The couple’s plan fell apart under police questioning and they were both sentenced to six years in prison. Their duplicitous story was made into a film by the BBC in 2010 called Canoe Man.

The singer Olivia Newton-John was distraught when her boyfriend of the time, the US cameraman Patrick McDermott, disappeared in 2005 while on a fishing trip off the coast of California. A US Coast Guard investigation concluded that McDermott “most likely drowned”.

However investigators on the US TV programme Dateline, on looking into the case thought it more likely that McDermott had faked his own death to allegedly get out of paying child support to his ex-wife.

Last year an Australian TV show claimed it had evidence that McDermott was alive and well and living in Mexico, after scrutinising photographs of a man who matches his description.

Commenting on the claims that her ex-boyfriend is still alive, Newton-John has said: “There are things in life you have to accept and let go. Of course questions come up, it is human to wonder”.

Bucking the trend somewhat of faking your own death for selfish reasons is the little known story of Juan Pujol García. The Spaniard, a double agent working for the Allies during the second World War, is now regarded a key figure in the war for the amount of credible disinformation he supplied to Hitler and the Nazis at key junctures.

His greatest success was in being able to convince German military commanders that that the D-Day Allied invasion would not be taking place in Normandy but much farther north in France. By being responsible for the diversion of so many German military resources, he helped ensure D-Day’s success.

Having played a pivotal role and having had successfully deceived the Nazis for so many years, he knew he was a marked man to surviving Nazis. In an elaborate scheme, aided by M15, García travelled to Angola in 1949 where he “died” from malaria.

In reality, the very much alive double agent moved to Venezuela where he opened up a bookshop and lived to a grand old age – one of history’s hidden heroes.

And they’re just the ones we know about.