Some good news: A brainy Dubliner, a climber’s bedroom, and a saucy little dish

The stories that cheered us up today... from neighbourhood safaris to Zoom weddings 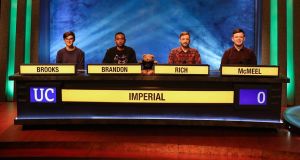 Do you take this man? I , Zoom

Although many couples have had to cancel their weddings because of the pandemic, in New York couples are being given the chance to zoom on up the aisle. The state governor, Andrew Cuomo, this week signed an order allowing online marriages. There’s now no excuse for couples not to get married, he joked. “I am issuing an executive order allowing New Yorkers to obtain a marriage licence remotely and allowing clerks to perform ceremonies via video conference ... You can do it by Zoom, yes or no.”

What do you do if you are a teenager who loves climbing but the pandemic has put a stop to your favourite hobby? You start climbing your own walls of course. Erin Sloan (15) from Cheshire, England, who for the past four years has been an avid climber and instructor at her local centre, spent a week constructing an 244cm (8ft) climbing wall in her bedroom. “I just shut my door, put my music in and started drilling. I was very proud when it was done,” said the teenager. “The first thing I did was call my Dad to tell him and show him pictures. He was really proud.”

We’re not surprised so many people on social media were raving about this fealegood fly on the wall documentary set in the hairdressers of Abbeyfeale on RTÉ One last night. The Co Limerick town has a population of only 2,000 but has more hairdressers and barbers per head of population than any other town in Ireland and possibly the world – 16 hairdressers or barbers on just two small streets. The uplifting programme was made by Atom films, the people behind acclaimed documentary Older Than Ireland. Full of memorable characters, quotable quips and heart wrenching storylines, it was the perfect distraction to our pandemic woes. But don’t just take our word for it. Dr Mary McAuliffe said: #abbeyfealegood is just brilliant ... funny, sad, poignant, full of characters and people with real stories, a portrait of small town Ireland, in all its complicated humanity! Well done all.

#abbeyfealegood is just brilliant ... funny, sad, poignant, full of characters and people with real stories, a portrait of small town Ireland, in all its complicated humanity! Well done all

We’re not the only ones looking for good news stories. David Beard of National Geographic told the New York Times that the demand for good news is unlike anything he’s seen before. “People are looking for a reason to go on,” he said. To try to feed this hunger, National Geographic has created two newsletters to ride the good-news train, including one for children and families and another that is completely coronavirus free. Both, he said, are “a reaction to this onslaught of terrible news”. National Geographic is also celebrating 50 years of Earth Day – which falls on Wednesday – by hosting neighbourhood safaris to inspire families to engage with the planet through its amazing animals. You can also learn easy ways to turn children into “planet protectors”. There are any number of interactive resources on the site, which is guaranteed to leave home-school pupils entertained as well as educated.

A brainy Dubliner studying for a PhD in computer science in Imperial College, London, was the member of the four-man team that won the final of the BBC’s University Challenge on Monday. Conor McMeel is currently studying at home in Lucan, Co Dublin, while the London university’s campus is closed in response to the Covid-19 crisis. “It was a great experience, start to finish”, Mr McMeel told RTÉ One’s Nine O’Clock news. “I’ve been watching it for so long.”

Recipe of the day

Comfort food is the name of the game during the pandemic and we are lucky that several Eurotoque chefs are sharing the recipes they love to cook at home. Chef Kevin Aherne of Sage restaurant in Midleton, Co Cork has a saucy little dish for you today that’s bound to bring a smile to the faces of your lockdown compatriots. This chicken and mushroom pie with gratin potatoes is an all in one dish that is easy peasy to make. If you can find a patch of wild garlic within your 2km - it’s in season and everywhere right now - to jazz up the recipe all the better.