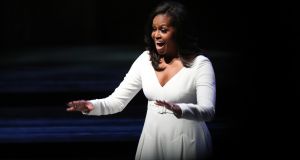 Things we learned from Michelle Obama during her event in London’s Southbank Centre on Monday: She still has imposter syndrome, marriage counselling is “natural”and the people around the most powerful tables in the world “aren’t that smart”.

In the course of a wide-ranging interview, the former first lady also explained that she views her husband Barack Obama as “the writer” in the family, while she is “the storyteller”.

Almost 3000 people, women for the most part and 300 school children, came to hear her tell stories in the Royal Festival Hall. Stories of education, career, life, marriage, parenting and stories of becoming, the title of Obama’s autobiography, which has sold three million copies.

Nigerian novelist and feminist Chimamanda Ngozi Adichie hosted the conversation, which began with Obama reflecting on her working-class childhood on Chicago’s south side with her mother Marian and father Fraser, who had multiple sclerosis (MS). “We had everything or we had nothing, depending on how you tell it,” she said in a video of her life which was played before the event.

Obama described how as a young girl she was always encouraged to argue her case, whether it was about piano lessons or her insistence on peanut butter for breakfast.

“One of the things my parents believed was that my voice was relevant and my opinions were meaningful and my anger and frustration was real,” she told the audience. “And that’s something that’s important for parents of any socio-economic background to realise. That was the gift that she gave me. My parents saw this flame in me . . . and instead of doing what we often do to girls who are feisty, which is try to put that flame out, to douse it . . . because we’re worried about not being ladylike or being bossy, they found a way to keep that flame lit because they knew I’d need it later on. To have that flame lit in a girl means you have to value her voice and let her speak and learn how to use it.”

With her voice breaking with emotion, she spoke about the “debilitating and devastating” disease of MS. “I grew up watching my father decline . . . there is a caution that comes in you. His death was sudden but it was always looming . . . it’s an emptiness I still haven’t gotten over.”

“There isn’t a day I don’t think about my father . . . what he would think of me, would I be making him proud?”

Obama had arrived on stage in a flowing, floor-length white jump suit, to a standing ovation and thunderous cheers from the audience which included women of all ages and hundreds of black women. Michelle Obama fever was running high in London. Meghan Markle was rumoured to be on the guest list, fashion designer Stella McCartney could be seen in the audience. A few rows away, Channel 4’s Jon Snow happily snapped selfies with the young black woman beside him wearing a Barack Obama t-shirt. The atmosphere was more raucous rock gig than straitlaced book event. It even had its own playlist of Obama favourites, from Stevie Wonder to Adele.

The mother of two girls, Malia and Sasha, was asked whether she had a message for young black women: “It’s still hard out here,” she said reflecting on her own experiences. At one point on the political trail she was referred to as “an ape in heels” in a video that went viral.

“What happens to black women is that we become a caricature . . . people will take the things from us that they like. Our style, our swag becomes co-opted but then we’re demonised. We are angry, we are too loud, we are too everything. And I experienced that. How dare I have a voice and use it.”

“The question I continue to ask myself is: am I good enough? This is true for women, for working-class people but it’s profound for women of colour. We are walking around with these demons and doubts in our heads; we have to slay the dragon in our own mind.”

“My advice to young women is that you have to start by getting those demons out of your head . . . the messages that are sent from the time we are little are: ‘maybe you are not [good enough], don’t reach too high, don’t talk too loud.”

Obama, who turns 55 in January, said that during her career she has been “at every powerful table you can think of”, from corporate boards, to “G summits”, to the UN.

We are putting down markers, we make progress and going backwards doesn’t mean the progress wasn’t real

“Here’s the secret: they’re not that smart. There are a lot of things that folks are doing to keep their seats because they don’t want to give up power. And what better way to do that than to make you feel you don’t belong . . . you have to prepare yourself, because when you get those arrows thrown at you, all you can fall back on is your experience and your ability.”

Alluding to the current political regime in the US, she said she wanted to strike a hopeful note. “Change is not a straight line. If you look over the history of America: the voting rights act is not as old as I am . . . We mistakenly thought that Barack Obama was going to erase 100 years of history in eight years.” But that was, she said, “ridiculous”. “We are putting down markers, we make progress and going backwards doesn’t mean the progress wasn’t real.”

“We are laying the foundation for the next generation . . . you do it for your grandchildren. That’s how we make progress.”

There was no direct mention of Trump but she did reflect on the scrutiny the Obamas were placed under during their time in the White House, from the cost of the shoes she wore, to how much golf her husband played. “I know,” she smiled. “Go figure”.

The former lawyer talked about her own fears and doubts despite serving two terms in the White House and launching global education initiatives, such as Let Girls Learn: “I still have imposter syndrome,” she said. “It doesn’t go away, that feeling that you shouldn’t take me that seriously. What do I know? I share that with you because we all have doubts in our abilities, about our power and what that power is.”

“If I’m giving people hope, then that is a responsibility, so I have to make sure that I am accountable.”

Earlier that day she spoke to 900 schoolgirls in the Elizabeth Garrett Anderson School in Islington, a diverse, high-performing school she had visited before as first lady. “We don’t have any choice but to make sure we elders are giving our young people a reason to hope,” she said.

During the 90-minute interview at the Royal Festival Hall, Obama was warm, grounded, generous with her considerable life lessons and often very funny.

At one point she advocated for marriage counselling, something she said was “natural” to seek out when it came to the tricky business of trying to “meld two lives forever”. “Marriage,” she said, “is hard, there’s no training for it ... people tell you it’s love, it’s not love y’all ... you gotta have a lot of like in there and a lot of compromises.”

She said she advises young married couples starting out that “there are going to be huge chunks of time where you want to push him out the window . . . and it’s never the other way around, because I am perfect,” she joked.

This last tongue in cheek remark about perfection drew one of the biggest rounds of applause of the evening. She might not think she’s perfect, but as Michelle Obama fever raged in London on Monday night, an appreciative crowd of almost 3, 000 people begged to differ.

Becoming by Michelle Obama is published by Viking