'He told me the electricity was coming. And nothing was ever the same again'

Family Fortunes: I was inconsolable, fearing the coming of light as a harbinger of change 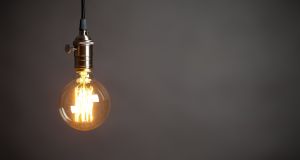 “There in the little scullery of the thatched cottage he spoke slowly, solemnly, and told me that the electricity was coming” Photograph: iStock

One September evening when I was eight years old, a favourite uncle asked for a word in private. There in the little scullery of the thatched cottage he spoke slowly, solemnly, and told me that the electricity was coming.

I was inconsolable, fearing the coming of the light as a harbinger of change, of irrevocable disruption and the death knell for the ponderous lighting up ceremony.

Fifty years later, the details linger, how entranced I was, a privileged witness. First he would unscrew the head and release the delicate round globe from its cage, polish it with striped flannel and hand it to me. I’d hold it like a Mass server. He’d trim the wick and pour the paraffin oil, strike a match and together, in silence, we’d watch the flame waver.

He’d twist the delicate brass wheel a few times, the oily smoke permeating the space around us, until he had set the flame to produce just the right shade of incandescent yellow light. Satisfied, he would hang it from a crook that was nailed to a ceiling crossbeam.

My mind was a silent theatre of possibilities then, my imagination brewing with anticipation – would he tell a ghost or a fairy story, maybe lilt a Paddy Fahey tune or whistle The Rising of the moon? He made finger-rabbits hop along wallpaper borders, multi-winged butterflies swooped down from the tongue and groove ceiling and constellations of stars danced out the scullery door.

His farmer’s hands could magic up a flying dove, a duck, a swan, anything I asked for he would animate, until the electric light came and those games were all over.

No more shape making from my chiaroscuro artist, trickster man, no more ghostly outlines, the feathered and furry forever banished. The inconsistencies that were entirely credible in the light of the tilley lamp, in the electrically lit cottage, became overnight fabrications.