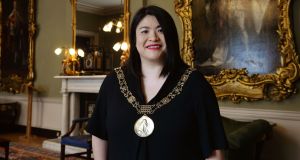 Hazel Chu remembers the first night she spent living at one of the most famous addresses in Dublin. “It was a bit chaotic, to be honest, because we had so many boxes and other things,” she says, laughing. “But I remember walking up the staircase and thinking, Oh, this is interesting.”

In June, Chu, her partner, Patrick Costello, and their daughter, Alex, moved into the Mansion House after she was elected the 352nd Lord Mayor of Dublin. The biggest difference, she says, has been the expanse of their apartment, located upstairs in the historic house, which was built in 1710.

“The three of us had been remote working with Alex, and we live in a small two-bed, so it was very nice to have the extra space,” Chu says. “She has room to actually play with her toys now; before we would have to put them back straight away. And I am very conscious that many families live in smaller spaces than we did.”

Alex, who is three years old, is so enamoured with her new home that she already doesn’t want to leave. “Yesterday I tried to explain to her that eventually we will have to move out because the owner is on holiday and will come back at some stage, and she just looked really sad and kept saying, ‘Why? Why, Mama?’” she says, laughing.“You’re getting thrown out in eight months’ time, whether you like it or not,” Chu responds.

This year has been a year of excitements and disappointments for Chu. Being elected mayor – and becoming the first person of Chinese origin to hold the office – was a highlight. But her wedding to Patrick, a Green Party TD, was postponed until June 2021 because of the pandemic.

Nevertheless, she is looking forward to her first Christmas on Dawson Street. Part of Christmas Day will be spent doing hospital visits and helping out with the annual Knights of St Columbanus Christmas dinner for the homeless, which has been moved from the RDS to the forecourt of the Mansion House this year. In the afternoon and evening she will spend time with her family, and on St Stephen’s Day she will continue the family (and cultural) Chinese tradition of a “hot pot dinner”, with a variety of meats, soups, dumplings, noodles and more.

“I’ve been told by the team here that Christmas is quite magical at the Mansion House, with the lights and trees and everything,” she says. “It’s a happy time and we’re supposed to be pushing positivity, but I’m also really conscious that it’s going to be a hard Christmas for so many people. So I guess we’re looking forward to Christmas, but it will be a bit more toned-down.

“There would usually be a crib at the Mansion House, and trees and lights and Santa, so we will be doing various versions of that. Whatever way we spend Christmas in the house, we would like to make sure that we’re also inviting the public in and sharing it with them.”

Chu says Christmas will be different for everyone this year – not just those who have been through major life changes. “There’s been loads of different things that have come out of Covid, horrible as it is, but it is an opportunity to look at Christmas and the meaning of family and gathering together,” says Chu. “That’s ultimately what it’s all about, isn’t it?”