He argued for the literary superiority of the Western giants like Shakespeare, Chaucer and Kafka 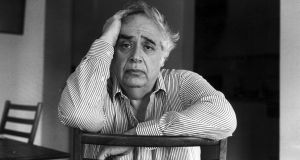 Harold Bloom in New York on 1990. Bloom, the prodigious literary critic who championed and defended the Western canon in an outpouring of influential books, died on Monday, Oct. 14, 2019, at a hospital in New Haven, Conn. He was 89. (Jim Wilson/The New York Times)

Harold Bloom, the prodigious literary critic who championed and defended the western canon in an outpouring of influential books that appeared not only on college syllabuses but also on bestseller lists, died on Monday at a hospital in New Haven, Connecticut. He was 89.

His death was confirmed by his wife, Jeanne Bloom, who said he taught his last class at Yale University on Thursday.

Bloom was frequently called the most notorious literary critic in America. From a vaunted perch at Yale, he flew in the face of almost every trend in the literary criticism of his day. Chiefly he argued for the literary superiority of the western giants such as Shakespeare, Chaucer and Kafka — all of them white and male, his own critics pointed out — over writers favored by what he called “the School of Resentment,” by which he meant multiculturalists, feminists, Marxists, neoconservatives and others whom he saw as often betraying literature’s essential purpose.

“He is, by any reckoning, one of the most stimulating literary presences of the last half-century — and the most protean,” Sam Tanenhaus wrote in 2011 in The New York Times Book Review, of which he was the editor at the time, “a singular breed of scholar-teacher-critic-prose-poet-pamphleteer.”

At the heart of Bloom’s writing was a passionate love of literature and a relish for its heroic figures.

“Shakespeare is God,” he declared, and Shakespeare’s characters, he said, are as real as people and have shaped Western perceptions of what it is to be human — a view he propounded in the acclaimed “Shakespeare: The Invention of the Human” (1998).

The analogy to divinity worked both ways: In “The Book of J” (1990), Bloom challenged most existing biblical scholarship by suggesting that even the Judeo-Christian God was a literary character — invented by a woman, no less, who may have lived in the court of King Solomon and who wrote sections of the first five books of the Old Testament. “The Book of J” became a bestseller.

Entanglements Bloom was widely regarded as the most popular literary critic in America (an encomium he might have considered faint praise). Among his other bestsellers were his magnum opus “The Western Canon: The Books and School of the Ages,” published in 1994, and “How to Read and Why” (2000).

The spotlight he commanded as a powerful cultural figure did not always flatter him. In 1990, GQ magazine, in an article titled “Bloom in Love,” portrayed him as having had intimate entanglements with female graduate students. (“A disgusting piece of character assassination,” he was quoted as telling Begley in The Times Magazine.) And in a 2004 article in New York magazine, writer Naomi Wolf wrote that he had once put his hand on her inner thigh when she was an undergraduate student. “Beautiful, brilliant students surrounded him,” she wrote. “He was a vortex of power and intellectual charisma.”

Harold Bloom was born July 11, 1930, in the East Bronx, into an Orthodox Jewish household. He was the youngest of five children of William and Paula (Lev) Bloom, struggling immigrants from Eastern Europe. His father was a garment worker.

The first book Harold read was an anthology of Yiddish poetry. He soon discovered the New York Public Library’s branch in the Melrose section of the Bronx and worked his way through Hart Crane, W.H. Auden and T.S. Eliot. He graduated from the exclusive Bronx High School of Science — “that ghastly place”, he called it — and went to Cornell on a scholarship, where he dazzled his professors.

When he graduated from Cornell in 1951, his teachers insisted that he go to another institution for graduate school. “We couldn’t teach him anything more,” said M.H. Abrams, the eminent critic and scholar of Romanticism who was Bloom’s adviser.

Bloom was accepted at Yale, a stronghold of the New Criticism in the 1950s. The New Critics, among them T.S. Eliot, favored 17th-century metaphysical and religious poets like John Donne and George Herbert, both clergymen. Bloom found that school of thought arid.

At his death he lived in the same rambling 19th-century brown-shingled house in New Haven that he and his wife, Jeanne, a retired psychologist in the Branford, Connecticut, school system, had occupied for more than 50 years. He had married Jeanne Gould in 1958.

In addition to his wife, Bloom is survived by two sons, Daniel and David.