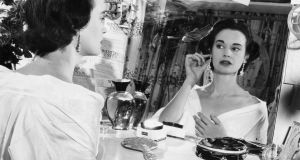 Gloria Vanderbilt, the original “poor little rich girl”, inherited vast family wealth at the high price of a loveless childhood and later made her own money through celebrity fashion lines. Although she lost both fortunes, she has died, at the age of 95, comfortably off and, if not happy at last, at least creatively fulfilled.

She was born in New York. Her father, Reginald Vanderbilt, was an alcoholic playboy gambler who died when Gloria was not yet two, leaving the child and her trust fund to the care of her 21-year-old mother, Gloria (nee Morgan). Mother, child, nanny and entourage toured Europe and America on interest from the fund, until the child’s paternal aunt, the art collector and sculptor Gertrude Vanderbilt Whitney, challenged for custody of “little Gloria” in 1934.

The court hearing was scandalous: the nanny accused Gloria’s mother of being a lesbian, as well as man-hungry and cocktail-crazy, and the judge awarded Aunt Gertrude strict custody of Gloria within a Vanderbilt compound on Long Island. A later decision permitted more maternal access, and Gloria spent her 17th summer in her mother’s Beverly Hills home, where she ran mildly wild among Hollywood stars. She met Howard Hughes, then an industrial power, and would “have married him in a minute. But then, I would have married anybody in a minute because I wanted to get out.”

The first available groom was Hughes’s fixer, Pasquale (Pat) DiCicco, who mocked her, beat her, and flunked their wedding night to play gin rummy with a Marx brother. The marriage staggered on for three years, and the day after a Reno divorce, Gloria eloped with the conductor Leopold Stokowski, then aged 62.

This sentimental education (“Sex really saved me,” Vanderbilt said, “it gave me a sense of self: I had no confidence at all”), in which the Stokowskis dwelt in splendiferous Californian seclusion, “cloistered like a sexy monk and nun”, she said, produced two sons, Stan and Christopher, who were the subjects of a custody wrangle after the 1955 divorce. She won, but her Vanderbilt millions were seeping away.

Shy, elusive Vanderbilt had, however, discovered she was attractive to men; her catches included Marlon Brando, Frank Sinatra, Gene Kelly and the photographer Gordon Parks. She was also lead swan among the writer Truman Capote’s flock of muses.

Towards the end of her third marriage, to the film director Sidney Lumet, she studied at the Art Students League of New York and, after she married the magazine editor Wyatt Cooper in 1964, began to display her art. Soon, she began designing household goods directly, and made a deal in 1968 with Hallmark Cards. Vanderbilt travelled to promote her studio’s products, while raising Anderson and Carter, her sons with Cooper.

The marketer Warren Hirsh, working for the fashion firm Murjani, had already been rebuffed by Jackie Onassis over a proposal for celebrity-endorsed jeans before Vanderbilt said yes to him; the jeans went on sale in 1977. She approved the novel idea for a previously unattempted cut, curving in at the waist, particularly the small of the back, to flatter female body shapes: “they really hug your derriere” was the pitch. At its peak, her income from the Murjani deal was $10 million a year.

Cooper, the love of her life, died of a heart attack in 1978, aged 50. In 1988, Carter, then 23, fell to his death from the terrace of Vanderbilt’s Manhattan home before her eyes, either a suicide or the victim of medication that precipitated a psychotic episode. There was no escape through work: Murjani failed to capitalise on her brand’s popularity, while some of the many licensing deals for Vanderbilt’s own company, GV Ltd, were less than viable, notably a tofu-based frozen dessert.

Gloria’s habitual reliance on psychiatric help led her to hand over control of her bank accounts, with power of attorney, to her therapist and her lawyer: the lawyer sold GV Ltd licences and failed to pay her business taxes for more than a decade. She successfully sued both men for more than $1.6 million, never recouped, although the Bar Association awarded her partial compensation.

But the Internal Revenue Service abated not a cent of the millions she owed in taxes and she sold her homes to pay in full, moving into the spare bedroom of Anderson’s apartment. She told him she was adamantine at core: she would survive.

In 2016, she made a documentary film about her life, Nothing Left Unsaid, with Anderson, now a CNN news anchor. The pair also published a collection of their correspondence, The Rainbow Comes and Goes, in the same year.

Anderson, Stan and Christopher survive her. – Guardian News and Media 2019