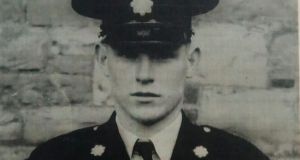 Bernard King was a garda in Dublin from 1953-1980 before finishing his career as chief superintendent in Dún Laoghaire.

Bernard King started his working life building roads for Mayo County Council and when he was 19 or 20 was promoted to become a steam engine driver.

Advised to apply for the guards, he did a correspondence course from Kilroy’s College to prepare for the Garda exam.

A garda in Dublin from 1953-1980, he was promoted and moved to Boyle for a few years. Then it was back to Dublin, a further promotion and time in Cavan-Monaghan, before finishing his policing career as chief superintendent in Dún Laoghaire for two years until obligatory retirement on his 60th birthday in 1992.

His granddaughter Maedbh says one his colleagues recalled that if someone brought a problem to him, his response was “You now have half a problem, I have the other half.”

“He was fantastic at making and keeping friends,” his son Tim says. “He had friendships going back to his childhood years and his memory was phenomenal. He remembered every single thing, all his days at school, his dates and times.”

Originally from Breaffy in Co Mayo, he settled in the Blackrock area of Dublin with his wife Marjorie who died at the age of 67 from Alzheimer’s disease. The couple had three children Tim, Kate who lives in the US, and Bryan and there are 10 grandchildren.

But though he lived alone for the next 20 years he was always active. He was “involved in almost every aspect of community life, from his volunteer work in Foxrock parish and Active Retirement to bowling and dancing classes with friends,” says Maedbh.

He had a regular Tuesday night get-together in The Grange pub with his sons and brother-in-law and “he spent many happy days cycling in Wicklow and he loved to go fishing on the lakes of Lough Conn and Lough Mask in his beloved west of Ireland”.

He travelled regularly to visit his sisters and brother in England as well as trips to the US to spend time with daughter and grandchildren.

His last visit was in December to Kansas for the wedding of the first of his grandchildren to get married.

His death was unexpected after he was admitted to St Vincent’s hospital for foot surgery. A test later confirmed he had Covid-19. Up to a few hours before his death he seemed to be holding his own but then slipped away, aged 87.

“His neighbours were very shocked because the last time they saw him he was out cutting his grass,” his son says. Five family members and personal friends, a priest and sacristan attended the cremation ceremony at Mount Jerome.

Reflecting on his father’s life, his son Tim says that “as kids we didn’t see a huge amount of him because he was working so hard so it was in the last 20, maybe 30 years as we all became adults that we had plenty of time with him. And the grandchildren had loads of time with him.”