A boy growing up in Dublin during the 1980s escapes his strained family life by starting a band and moving to London. 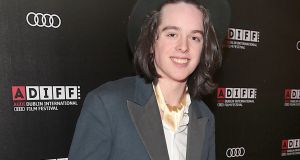 Post-shoot, Ferdia has returned to school. But readjusting to civilian life hasn’t been easy: “You’ve worked equally with other adults and suddenly you’re just a kid again. I don’t want to come across as a diva but it’s hard being stuck in a uniform in a room again. h 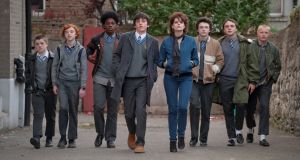 If you don’t recognise the name Ferdia Walsh-Peelo, you best start memorising it. The 16-year-old star of Sing Street has recently wowed audiences at the prestigious Sundance Film Festival and has just scooped the seventh Michael Dwyer Discovery Award at last month’s Audi Dublin International Film Festival; it is only the second time that an actor has been named as the recipient.

It’s a big step up for a youngster who has quietly spent his formative years in Ashford, Co Wicklow. And we do mean formative: Ferdia was home-birthed.

“It’s one of those things that nobody believes when you tell them at school,” laughs Walsh-Peelo. “But I’ve spent all my life in Ashford because I was born in my house; my little sister, as well. Crazy, really.”

For a natural-born homebird, Walsh-Peelo has managed to get around. By age 12, the then young soprano had appeared on The Late Late Show, performed solo at the Wexford Opera House, and scored his first professional contract, touring with Opera Theatre Company.

Unsurprisingly, he hails from a musical household. His mother, Toni, is a soprano and a teacher at the DIT Conservatory of Music and Drama; his siblings – Tadgh, Oisin and Siofradh – have all trained in classical music.

“I’ve played music all my life,” says Ferdia, the third of four Walsh-Peelo kids. “It’s something I’ve been exposed to from a really, really early age. Mum teaches. Dad did singing for a little while. My older brother is doing it full-time. By the time I was born there was just so much music in the house. I was singing before I was talking. When we were smaller everybody studied classical.”

He has a background in vocals and piano, although in recent years he’s all about the guitar. “I don’t know what age I was when I first picked a guitar up,” he says. “It was a slow thing. I thought it would be handy thing to know how to play. But I would never have thought it would be my main instrument – it’s a bit boring, it’s a bit stereotypical – but it has become that. The great thing about the classical background is that you can transfer a lot of skills. It’s a good base to expand into everything else.”

Everything, evidently, includes movies. Thousands of kids auditioned for Sing Street, the irresistible new musical from Irish director John Carney. But it was Walsh-Peelo who landed the lead role as the filmmaker’s teenage alter-ego.

“Ferdia got better and better with each call-back, the reverse usually being the case with kids,” says Carney. “My not giving him the part made him come back with a renewed frustration for it each time. Like a puppy searching for a treat behind a sofa. Also, he is almost as good-looking as I was as a kid.”

The admiration is mutual: “John is a bit of a mad character,” laughs Walsh-Peelo. “Really lovely. Always messing. The first few days on set, we were thinking: this lad is just nuts! Once you get to know him he’s great, really fun, but it takes a while to get him and all other these new mad people that were there. He has a really funny humour that wasn’t like anything I’ve come across before. Because I was younger then. I’m still young now. But I’ve realised since that you meet loads of people in the industry who have a similar sense of humour. On set everyone was interesting and quirky and flamboyant.”

The finished film is unabashedly romantic and fantastical, despite its real-world origins in Carney’s own stint at Synge Street. Was Walsh-Peelo tempted to channel his director into his performance as Carney ersatz?

“I didn’t think about that at all,” says the budding star. “I know it is hugely influenced by John’s life. But I wasn’t aware of a lot of those details until after. Even when I did hear about them, I didn’t dwell on it. In no way was I trying to be John. John didn’t want it to be him either. He wanted bits of himself in there. Like that thing about him always having a nice coat and a soft leather bag and a long scarf. That’s the kind of thing they bullied him for, I suppose.”

We’ve only just finished reading “The Irish are coming!” headlines from this year’s Academy Awards, but hold on to your hats: the trade papers have already conferred “Oscar buzz” on Sing Street. Carney does have form in this respect. His fourth feature, Once, took the Best Original Song statuette in 2007 for the Glen Hansard and Markéta Irglová duet Falling Slowly; last year, the same director’s Begin Again secured another nomination with the song Lost Stars.

On the back of its Irish release and a world premiere at the Sundance Film Festival, Sing Street is currently rated at 100 percent on the aggregate review site, Rotten Tomatoes, an honour usually reserved for such classics as Roman Holiday and The Wages of Fear.

“Sundance was craziness,” says Walsh-Peelo of the esteemed Utah festival. “It was like a dream – I was sitting at the premiere and Sting comes in and sits beside me. I couldn’t sleep. I was buzzing. It was only after I got home and it all sunk in: Oh my God!”

Post-shoot, Ferdia has returned to school. But readjusting to civilian life hasn’t been easy: “You’ve worked equally with other adults and suddenly you’re just a kid again. I don’t want to come across as a diva but it’s hard being stuck in a uniform in a room again.

“When we were making the film, I had my own apartment in Ballsbridge. I was working with John and he was joking around like were the same age. I have the press tour at the moment. I’m not sure what I’m going to do next.”

Whatever that may be, expect big things. You memorised that name, yet?

Sing Street is on general release