Ellen DeGeneres: ‘Remember to have fun and laugh and be kind’ 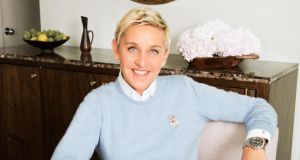 Ellen DeGeneres: it made sense to branch out and build a bedding, barware and home-accessories brand, ED by Ellen

The superstar talkshow host Ellen DeGeneres is almost as well known in Hollywood for her savvy house moves – she’s a serial house flipper – as she is for her TV show. But ask her what the key to feeling at home is for her and the answer is simple: “Portia and my animals are my essentials,” she tells The Irish Times.

Portia is Portia de Rossi, her actor wife of more than a decade, and the animals are their three dogs (Wolf, Augie and Kid) and three cats (Charlie, George and Chairman).

It’s hard to keep track of the homes: the family likes to keep on the move, buying, renovating and selling up homes in multimillion dollar deals. Variety magazine describes them as “two of Hollywood’s most prolific buyers and sellers of high-end residential real estate”, noting that each move nets them an “impressively hefty profit ”.

Having bought, refurbished and sold so many properties, DeGeneres has built up considerble design skills that they use to give each new project a very different look

This summer for instance the couple sold their ocean view 1930s estate in southern California for $34 million (€29 million) to Netflix’s chief content officer, Ted Sarandos. They’ve sold previous homes to an impressive list of California A listers including Ryan Seacrest, Brad Pitt, Napster founder Sean Parker and Tinder founder Sean Rad. You can see inside many in her 2015 coffee table book by Grand Central Publishing and simply titled Home.

Having bought, refurbished and sold so many properties, DeGeneres has built up considerble design skills that they use to give each new project a very different look. Together with de Rossi, she selects the furniture and furnishings that fit each new home, rather than shoehorning the same look into every home. She recently described the renovation process to People magazine as, “painting a canvas until there’s nothing left to do, then selling it and buying a new one”.

Along the way it made sense to branch out and build a bedding, barware and home accessories brand ED by Ellen, which launched in 2015. It has licensing deals with US chains Bed, Bath & Beyond and Petsmart as well as Thomasville Furniture and Loloi Rugs.

Royal Doulton, the range pictured here, is one of four collaborations that the brand launched last year and shows DeGeneres’s appreciation of the mid-century aesthetic and her love of hand-made African themes. It is available at Arnotts, Brown Thomas and other premium stockists.

How did your interest in design develop?

Growing up we constantly went to open houses so I think I was influenced by a lot of what I saw. I saw some beautiful homes and design styles that I loved and then I saw some that I didn’t particularly care for... I started to figure out what I liked early on. I was a very picky 11 year old.

Do you have any signature styles or ideas that you like when you design?

I like things that are stylish and functional, things that look pretty but that you can also use. And I like to mix those things in with things that have no purpose and are just pretty. So a space can be pretty and pretty functional all at the same time.

What are some tips for designing a room?

Do what you like. It’s your space and you have to like it so make sure you do what you want to do. Don’t feel like you have to follow any rules. I think I might be the first person to say this but rules are meant to be broken.

You have amassed a beautiful mix of antiques, design and art. How do you describe your home style?

My home style is a mix of vintage and modern. Some things are more worn and weathered and some things are new and clean. I love mixing them together and adding in books and art and objects that I’ve collected over the years. And thank you for calling it beautiful, I agree.

Where did you get ideas for the china collection you designed for Royal Doulton?

The collection is inspired by the things I love: art, positivity, animals. It reflects not wanting to take things too seriously and how important it is to remember to have fun and laugh and be kind. I put it all right there on the mugs so no one forgets.

Where do you go to get ideas or to jumpstart the creative process?

A bar. No, I get ideas and inspiration from everything and everyone around me. Nature, books, photographs, people. My ED team and the designers at Royal Doulton collaborate with me on ideas and we inspire each other.

You were lucky enough to spend your childhood years in and around New Orleans. Has the city influenced your aesthetic?

I’m sure being surrounded by the architecture and the art and the music all seeped in and influenced my style. It’s eclectic. There’s a lot of old there, but also it’s constantly influenced by new things – new restaurants, new music, new people. And I’ve always loved mixing new with old and combining different styles.

Do you get bored easily with your design schemes and, if so, how do you move a look on?

I’ve found that the best way to move a look on is to pack up and literally move. I love to move because it gives me a chance to start over in a new space. I don’t know if I’d call it bored. I like to think of it as activity-motivated.

Are there any essentials that you need in your house to make it feel like home?

Yes, Portia (de Rossi, her wife) and my animals are my essentials.

Which contemporary designers' works are currently impressing you?

The ED range is available at Arnotts and other premium stockists; royaldoulton. com, arnotts.ie