Eileen Battersby obituary: A literary critic with many great passions

Even when writing predominantly about the arts, sport remained an abiding interest 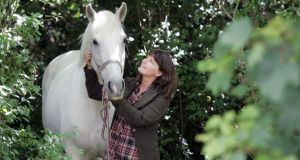 Eileen Battersby and Sophie in 2010. “A bond with a horse is unique, if you win it,” she said in a radio interview. “It’s a massive privilege.” Photograph: Alan Betson

Horse-riding and running were incorporated into a life lived at an intense pitch, marking her out as a distinctive figure among her more sedentary peers.

Running had become habitual since her teenage years at Crusaders Athletics Club in Dublin.

Having moved to Ireland from California with her family, she took up sprinting at this club, while attending secondary school in Loreto, Bray.

Her former English teacher there, Patrick Hunt, recalls the young Eileen Whiston’s wide reading and confidence in her views.

As a university student in the mid-1970s, she was regularly to be seen on the running track in the Belfield grounds of University College Dublin, where she studied English literature, writing an MA thesis on American novelist Thomas Wolfe.

Sport was her first subject as a freelance journalist, and her Irish Times print debut was a feature article on tennis, having previously contributed to the Sunday Tribune. She went on to cover Wimbledon in 1989. Even when writing predominantly about the arts, becoming a staff journalist in 1990, sport of all kinds remained an abiding interest, among the buzzing hive of her passions – or, more accurately, deep obsessions.

The music of JS Bach was one such; add to that a range of subjects: equine breeding, archaeology, historical geography, landscape painting and, above all, literature, especially the 19th-century novel from Germany and Russia.

Epic narratives of characters shaped by the forces of history fascinated her much more than considerations of literary form and theory.

and, of course, tennis players.

Disarmed by the chaotic flurry that tended to accompany Battersby, interviewees were often surprised by the deep level of attention she brought to bear on their lives and experience, while appearing barely to take any notes.

Eileen Battersby on her favourite nonfiction books of 2013

A precise memory was her back-pocket strength, which was just as well, since dealing with recording devices, or most kinds of technology, was not.

She made this her forte, receiving accolades and awards for championing writers and novels that might otherwise not have found a readership. “I enjoy being an information service,” she wrote, in a droll comment on her role as advocate for literary translation.

Increasingly interested in writing her own books, Battersby followed her well-received memoir, Ordinary Dogs, with a coming-of-age novel, Teethmarks on My Tongue. This was first published by Dalkey Archive Press, and recently by Head of Zeus in London by editor Neil Belton, who had commissioned her memoir for Faber and is a great admirer of her work.

She had never intended to write a novel. When writing, she said, “You’re inhibited by everything you read”.

She overcame her misgivings, and completed the novel about a clever, isolated young woman growing up in the US in the 1980s. Having experienced devastating rejection, the protagonist moves to Europe, ultimately finding solace in her bond with horses and a dog.

While not wholly autobiographical, for those who knew Battersby, some telling references to a subsistence diet of hot chocolate pierce the fictional veil.

In her memoir of life with her two rescue dogs, Ordinary Dogs, Battersby wrote movingly about her unusual affinity with her animals, by whom she was surrounded in her house in Co Meath.

“A bond with a horse is unique, if you win it,” she said in a radio interview. “It’s a massive privilege.”

Her horses, dogs and cats had a place in her heart second only to her daughter, Nadia, now living in London.

As in the memoir, in which she determinedly placed herself in the shadows, Battersby’s reticence extended to her family background and childhood in the US. This remained largely shuttered to others. And while her early marriage in Dublin in her 20s to Barry Battersby was very short-lived, she retained the marital surname of Battersby rather than reverting to her family name, Whiston.

In her reviews, Battersby was often critical of writers who disclosed too much, or were heavily confessional or introspective, having a particular aversion to “trendy personal memoirs masquerading as nature writing”.

Her protection of her own privacy and personal life seemed to make her uncomfortable with art that exposed other people’s, as was demonstrated in a ferocious opinion piece she wrote in reaction to Sebastian Barry’s play Hinterland (2002) for its inclusion of a portrayal of former taoiseach Charles Haughey’s extra-marital affair.

Battersby’s critiques could be tough and strongly worded; some felt especially so in reviews of female writers.

She considered it her duty to speak her mind, which required courage in the highly interconnected world of literature, publishing and arts in Ireland.

“There is a moral responsibility to be honest in your reviews,” she wrote. What may have given her the backbone to do this was the strong sense she had of being an outsider, something she identified also in her all-time literary hero, Joseph Roth, whom she termed “the consummate outsider”.

Battersby left The Irish Times in July after a period of extended leave, and since then contributed some reviews to international newspapers, while planning future writing projects.

She spoke recently about her ambition to write a non-fiction work on horses in war, with ideas also for a book with an American western theme.

In the past months she appeared at literary festivals, discussing her debut novel’s interlacing of love and grief, which had become a recurring theme for her.

As she wrote in a heartfelt review of Julian Barnes’s memoir of bereavement in 2013: “We soar, we fall. Love is like that, as is life.”

‘Kildare was a shocker. The feeling was instant’
9