Merrion Square will be loaded with the offbeat, the unusual and the inspired on the capital’s big night out 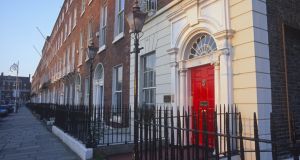 The doors and basements of Merrion Square, Dublin 2

Next Friday night is Culture Night, and here at the Magazine we are doing our bit to bring the capital alive, with some help from our friends in The Ticket, Arts and Books and beyond. From 5pm-10pm, many of the houses on Merrion Square will throw open their doors for the evening; below stairs, our own Irish Times Downstairs Dublin festival, curated by Gemma Tipton, promises unusual happenings in tiny outdoor spaces.

The event, now in its second year, is getting bigger with more ambitious events on offer: from outdoor opera at Merrion Hotel (and snazzy canapes for passers-by) to son et lumière at the French Embassy, to a chance to enter a secret garden at the the National Gallery of Ireland.

Stick around No 45, home of the Irish Architectural Archive, and the hub of Downstairs Dublin to hear Fintan O’Toole discuss Beyond 2016: What is a Republic?; Catherine Cleary interview restaurateur Kevin Thornton; and Róisín Ingle, Una Mullally, Kathy Sheridan, Rosita Boland and others reading stories from the Irish Times Archive.

In all, 25 basements spaces will be open to the public, many of them with access via the traditional wrought-iron steps that lead down to the these often forgotten spaces.

Drop into Nos 39 to 42 Merrion Square and come out rejuvenated, refreshed and even emotionally restored. At No 39, the folks at Morning Gloryville invite you to revitalise via full-on energetic dancing, powerful MCs, festival DJs, performers, yoga and massage: open to all ages and all people.

Next door at No 40 is Boxercise below stairs with Underdog Boxing . Box with certified boxing coaches and competing boxers for short, sharp burst of exercise, then de-stress with a massage therapist who will ease out the knots in a five minute session.

At No 41 there’s the Poetry Therapists, who team up with Poetry Ireland to provide the lines to soothe your soul. A five-minute session is all you need, with Enda Wyley, Geraldine Byrne and more. Finale event at 9pm is from the one and only Gary Jermyn, a poet who believes in the curative powers of fantasy, with offbeat shows that have wowed audiences from the Baltic to the Atlantic.

Take a stroll across to No 7, the headquarters of Foras Na Gaeilge and see the work of our garden writer, Fionnuala Fallon, who is planning a basement garden of native plants . Next door at No 8, the Royal Institute of the Architects of Ireland will present an intriguing structure, dramatically lit.

Meanwhile, at No 18, home of the Red Cross, look down to see Aoibheann Greenan’s giant, papier mache head of Wagner. At No 22 is Dublin: Past, Present and Future, a screenings of films of old Dublin along with the city reimagined in video by shortlisted entries from The Irish Times/Irish Architecture Foundation Imagine the Future competition.

No 27, home of Brendan Vacations Simoniacs (2015), by Elaine Byrne, features sculptures of Simoniacs with their head in the ground and legs flaying in the air. At No 29, the ESB Museum will be open for the evening. Below stairs, meet the Púca, a mythical Celtic creature, believed to be a shapeshifter who could take the form of a rabbit or a horse – among others. It is depicted here as a giant psychedelic serpent.

On the south side of the square at No 56 , home to Irish designer Louise Kennedy, key pieces from her latest collection will be on view below stairs. At No 58, there’s a horse outside is all we’re saying.

We predict a queue at No 63, home to the Royal Society of Antiquaries of Ireland, but on this night it’s also home to Soundbites – devised by Rachel Collins, with food by Aoife McElwain of Forkful and wines by O’Brien’s: meet, eat, shoot the breeze. Along with your food, you and an unknown dining companion are served a soupçon of conversation, a sprinkle of questions and a splash of fun. Sittings are every half hour and places limited, so arrive at 5pm to sign up.

Hard Working Class Heroes will take over the basement of No 64 with a preview of some of the new acts showcasing October 1st-3rd, including Bagels, 13, Staring at Lakes, Patrick Freeman and AikJ.

Next door, the French government will celebrate the move of its embassy to Merrion Square with an interactive sound and light installation that’s transformed by touch. Visitors will be able to touch an installation that will throw light and sound onto the building, courtesy of artists Scenocosme.

At No 70 , The Arts Council ’s building will be Wow and Flutter (2013), Jenny Brady’s film about the 30-year relationship between animal cognition scientist Irene Pepperberg and the African grey parrot she trained.

At No 73, the Irish Traditional Music Archive. there’s the Picture Books Library and Cartoon Studio, where Irish Times assistant literary editor Martin Doyle sets tricky questions. Answer him correctly to get your free mystery book.Plus: meet illustrator and designer Aoife Dooley, best known for her sweet and innocent illustrations, captioned and brought to life by the type of humour one can only accumulate from years of living on the Northside of Dublin. Róisín Ingle returns next week