Dinah Molloy obituary: Scientist who looked to at the moon and beyond 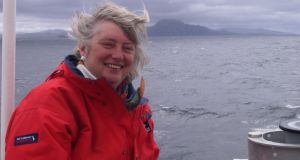 Dinah Molloy’s love of the sea would feature prominently in her later life.

Dinah Molloy’s CV ran to five pages but still did not capture all her achievements. A historical researcher, Arctic explorer, lunar analyst, classical violinist and a data programmer she died just before her 73rd birthday, but not before entrusting her final pieces of research to a colleague.

As the daughter of Eileen and Victor Molloy, she lived in many places during her childhood due to her father’s job in Bank of Ireland. Westport was her home for the first decade and she would return here regularly throughout her life with her brother Geale, who was her only sibling. It was here she developed her love of the sea which would feature prominently in her later life.

A move to Cavan introduced her to science in an unexpected way. In a bid to discourage children from drinking alcohol, her school undertook a temperance project. It involved adding alcohol to a solution surrounding an amoeba and noting the negative reaction of the amoeba. It did not engender a lifelong abhorrence of alcohol in Dinah, but it did awaken a fascination for science and experiments.

A brief dalliance with clerical work convinced her that she had taken the wrong career path after school and, and after consulting with her brother, she decided to change direction. In 1966 she began working for the cosmic ray section of the Dublin Institute for Advanced Studies (Dias), first as a lab technician and then as assistant to the director. She studied physics and chemistry in her spare time and passed exams with ease. A huge poster of Earth, taken from the moon, covered a wall in her tiny flat in Dublin so it was a dream come true to find herself working on lunar samples and space research materials following the 1969 moon landing. She worked on other Apollo missions in the 1970s and was a member of the team that prepared a detector package which was launched with Apollo 16.

As a violinist and viola player, music was a constant thread throughout her life, and she won scholarships to the Royal Irish Academy of Music and to Weikersheim in Germany in the mid-1960s. In the early 1970s she founded and managed the Testore Quartet and toured the US with chamber music groups she promoted and managed. She also wrote two directories – Find Your Music in Dublin and Find Your Music in Ireland.

This talent for arts administration was noticed and she was seconded from Dias to the Arts Council in 1975 to implement recommendations from a report on provision for the arts. She spent the next four years working as the Arts Council’s first music officer. Part of her work involved liaising with her counterpart in the British Arts Council, Eric Thompson. These Anglo-Irish relations went so well that Dinah married Eric Thompson in 1979 and moved to London.

However, she still travelled back and forth, acting as consultant to the newly established National Concert Hall in 1980 and becoming a visiting lecturer in arts administration and computing at University College Dublin.

She returned to education to study computers and discovered a knack for computer programming. In 1987 she set up a company to create software and design systems for arts organisations. The software quickly became the main source of custom-designed software for orchestras and other arts bodies in the UK.

This focus on the arts and software development did not overshadow her scientific interests, however, and in 2002 she began a ten-year stint at the Scott Polar Research Institute in the University of Cambridge. She visited Antarctica and the Arctic region and began her most challenging work. She studied the logs of whaling and seal hunting ships that worked in the Arctic waters in the 18th and 19th centuries. The logs recorded weather conditions and ice in great detail, and she recognised that collating all this information would provide a climate map for the Arctic, spanning more than a hundred years. Through this work, and as an associate research fellow at Trinity College Dublin’s Centre for Environmental Humanities, she developed her British Arctic Whaling Database.

This was her “Arctic opus”, according to John Nicholls, researcher and data manager at Trinity College Dublin. He said this databank of information could be processed and published for use by future generations. She was also a member of the Oceans Past Initiative – a global network for marine historical research. It paid tribute to her after her death, saying she had brought an array of skills and knowledge to the history and science of the Arctic.

After her husband died suddenly in 1992, she set up the Eric Thompson Organ Trust with his friends to help aspiring professional organists. Although she remained in Britain for many years after Eric’s death, she returned to Ireland to live in Blackrock, Dublin, several years ago. She had bought Neamstown Cottage in Kilmore Quay many years earlier and noticed how friends loved to seek refuge at the little white-washed thatched cottage. It was her dream to turn it into a retreat for scientists and artists and she had made some progress with this before her death.

She was diagnosed with breast cancer more than ten years ago, but the treatment worked, and she returned to her research with gusto. However, the cancer returned in recent months and this time there was no reprieve.

Scientists, musicians, computer programmers, childhood friends and Kilmore Quay neighbours were among the wide and diverse group of friends who gathered at her funeral in Enniskerry on November 9th.

Dinah Molloy is survived by her brother Geale and nephew Robert.