Decriminalisation-of-gay-sex anniversary is for ‘TDs and older people’

25 years after homosexuality became legal, how do young LGBT people view it? 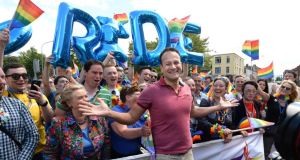 Across Dublin, rainbow flags flutter from shops and bars marking the month of Pride. Next Saturday tens of thousands of people will march through the capital in what is the biggest display of people on the streets outside of the St Patrick’s Day parade.

Like many things in Ireland today, the landmark occasions are racking up. This week Gay Community News launched an exhibition marking its 30th anniversary. On Sunday the Taoiseach will host hundreds of members of the LGBT community at a reception in Dublin Castle to mark the 25th anniversary of the decriminalisation of homosexuality.

That night, around the corner in Olympia Theatre, Colin Murphy’s play, A Day In May, based on the book by Charlie Bird and directed by Gerry Stembridge, will premiere, based on the stories of LGBT people in the run-up to the 2015 marriage equality vote, and the referendum campaign itself.

Next Friday the world’s first National LGBTI+ Youth Strategy – of which I served as independent chair – will launch. The Department of Justice is also developing a general LGBTI+ strategy.

During the week Taoiseach Leo Varadkar apologised to gay men who were criminalised in Ireland before the ban on men having sex with men was lifted in 1993. It was an emotional and poignant moment. There is no denying that Ireland is a leader on LGBT rights globally, something that would have been unimaginable 25 years ago.

In 1974, a march by gay rights campaigners from the Department of Justice to the British embassy marked a Pride protest in Dublin just five years after the Stonewall riots, and nearly a decade before the landmark protest that followed the suspended sentences given to the young men who killed Declan Flynn in Fairview Park.

There is a sense in Ireland that in the aftermath of marriage equality and the Gender Recognition Act the issues around LGBT equality have largely been dealt with. But within the LGBT+ community is this anniversary of decriminalisation relevant to younger people? And what issues remain to fight for?

‘The anniversary is more for TDs’

Ayrton Kelly (20), from Letterkenny in Co Donegal, is a member of the Youth Advisory Group that was integral to the development of the National LGBTI+ Youth Strategy. “I think it’s a reminder of how much has changed in 25 years,” he says of the anniversary and apology. “I think a lot of our generation, be they gay, straight, male, female, take a lot for granted. There’s not much talk amongst younger people around the anniversary, it’s more for TDs and older people who would have experienced it.”

“I think everyone thinks it’s an incredible achievement, but I don’t think young people appreciate the implications of it in a way. I certainly don’t. But then again, the problems have changed. It’s not like there aren’t still issues, but they have evolved from basic human rights to more nuanced complex ones.”

Kelly recently visited Kenya, and deleted dating apps from his phone before he went as sexual acts between men are punishable by five to 14 years imprisonment in Kenya.

“I think Irish people enjoy complaining, but we’re extremely lucky. When people take a step back and think about it, we’re incredibly lucky to grow up in the Ireland we’re growing up in today.”

Kelly says decriminalisation was a foundational issue that needed to be solved and then nuanced issues could be tackled, yet basic rights issues for trans young people, for example, still exist. “The bathroom issue for trans people, I’ve had to check my privilege there because I’ve never experiences that. School uniforms [for trans young people], I don’t even know how that feels. My perspective is gay male.”

“But there’s still room for a lot of change, so I think that’s risky in itself. Politics has changed. There seems to be more of a place at times for discussion and diplomacy instead of radical moves. Everything is changing. I think everyone, be they politicians, gay, straight, whatever, are changing along with that.”

‘There’s a lot of lost history’

One of the big issues right now is access to PrEP, the preventative HIV drug. Although a generic version of the drug is available on prescription in Irish pharmacies, the medication is not available under the Drug Payment Scheme and costs around €100 a month.

Dean Street, the sexual health clinic in London, said in 2017 that its rates of new HIV diagnosis dropped by 80 per cent between June 2015 and September 2017, with access to PrEP credited as having a large impact. In contrast, record numbers of people are being diagnosed with HIV in Ireland, with half of all new HIV cases resulting from sex between men. Our sexual health education and services are lacking, particularly outside of Dublin.

Robbie Lawlor (27), from Dublin, campaigns on better awareness, education, and resourcing to tackle the current HIV crisis in Ireland. “It’s a health inequity,” Lawlor says. “It is an LGBT issue. What other preventative drug out there that is so successful, so safe, is not being given to us? I think it’s because of institutional homophobia, absolutely.

“Sexual health is the runt of healthcare...600 men who have sex with men have been diagnosed with HIV in the past 2½ years. That is a massive number. There’s no sign of that number slowing either. I meet people every day, and they’re devastated when they shouldn’t be.”

“For my friends, their homosexuality, their coming out stories, none of them had bad reactions. So although they might not view the 25th anniversary as a milestone, we definitely feel its effects. There’s a lot of lost history. No one talks to the old guy at the bar, and there are a lot of lost stories.

“I think young queer people are more energised than ever. I think we have to thank the marriage equality referendum and the Repeal movement for that. We’ve seen Radical Queers Resist established, Act Up set up, and the majority of the members are young people. When you expose young people to the inequity of HIV or sexual health education, especially within the exclusion of LGBT sexual health, they get so angry.”

Lawlor also sees the broader social change that has occurred in Ireland in recent years in everyday experiences, “I was walking to a recent protest and I was wearing a T-shirt with two men kissing saying ‘Read My Lips’, I walked through town and not once did I feel afraid, not once.

“Back in 2012 I had to go to court when me and my ex-boyfriend got gay bashed. To go from that to this, that’s really powerful.”

‘It took a gay Taoiseach’

Last Friday Act Up protested outside the Taoiseach’s office on the issue of PrEP. There is a tendency within the LGBT community to hold the Taoiseach somewhat at arms length. Varadkar was never embedded in the grassroots of the community, and his politics are not radical, unlike the politics that informed queer liberation.

Varadkar’s coming out was perhaps more significant in changing the hearts and minds of non-LGBT people rather than those within the broader LGBT population. But there’s also a pointlessness to criticising someone for what they’re not.

“There’s a part of me that is a little bit generous towards the guy. I see him growing in his role, but I am also hugely impatient,” says activist Tonie Walsh, founding editor of Gay Community News.

“Everybody should be given some time but there are urgent issues...We can criticise Leo for not doing this or not doing that, and obviously he’s being informed by Ged Nash and his peers in Labour who never get any credit,” Walsh says of events this week, “but what I will say is that took a gay Taoiseach with the support of a lesbian Minister [Katherine Zappone] to move this forward.

“I don’t want to demean this occasion because it is hugely significant, but it’s too little too late for some men. The damage is done. But at least we’re trying to make amends. Our liberation is the work of ourselves, and it always has been.”