Sleep-deprived in Sydney: ‘This is inhumane. Somebody please bring me home’

Niamh Towey: An all-nighter at work, zero sleep, followed by a day at the races and night in the pub all became too much. I blame ‘The Irish Times’ 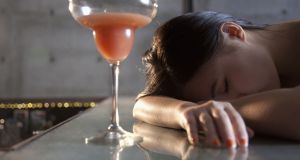 “This is inhumane,” I thought. “Somebody, please, bring me home. I can’t hack it anymore.”

Sleep is something which seems to be evading me lately, especially in the sticky heat of Dublin in June.

While tossing and turning in bed one night last month, I was reminded of my most disastrous sleep-deprivation episode to date.

It was St Stephen’s Day in Sydney, Australia, and I had fallen asleep for the third time on the couch of one of the city’s finest Irish pubs.

Despite friends’ efforts to conceal me with sunglasses and lay me down flat so I wouldn’t be seen, the bouncer was determined this time that I had to either wake up or go home.

This is inhumane, I thought. Somebody, please, bring me home. I can’t hack it anymore.

You see, I had been working remotely on irishtimes.com on Christmas Day, which was actually Christmas night Sydney time.

I was hoping to log off some time in the early morning so I could get some sleep, but alas, it was not to be.

What is usually a quiet news day turned out to be a very busy one, and I did not manage to get offline until 6am Sydney time.

That left me with roughly about three hours sleeping time until I had to don the glad rags and high heels and head out for what was one of the biggest parties of the year for Irish ex-pats: Boxing Day at Randwick Racecourse.

Not wanting to disappoint a crowd, I drank the vodka and energy drink

We had planned this outing for months. We were travelling with a few friends, and all of us had arranged to meet others at the racecourse.

There is no underestimating how much I could not back out of this. And so, dutifully, I hopped in the shower at 9am with not even an hour’s sleep behind me and tried to put my best face forward.

It was not to be, though. I could not get past my own foul humour – I was like a tired toddler bumping into things; spilling my tea on my pyjamas, nicking my leg with the razor.

Breakfast might cheer me up, I thought. Let’s have a nice breakfast. Round One went badly when my boyfriend threw the remainder of my porridge into the bin without asking – a mortal sin in these circumstances.

Round Two, then, consisted of another friend making me a pancake as consolation for the lost porridge. It was a very kind and thoughtful gesture, from one of my most generous and caring friends.

But the pancake was too thick for my liking, and like a teenager on a rampage I threw it into the bin. I still cringe at the thought of that bad act.

The last-ditch attempt at shoring me up for the day came in the form of two boiled eggs, left waiting for me in the pot while I scurried around trying to dry my hair and throw make-up on my worn-out face.

I could hear my kitchen aide ushering people away from the eggs – hungry men who would love an extra bit of protein to set them up for the day had to be guarded off for fear I might really blow a casket if Breakfast Round Three went badly.

In the end, I didn’t have time to eat the eggs, and they too went in the bin before we headed out to the racecourse.

Things got a bit better from that point on. I won money on a horse called Living the Dream, who was wearing the Roscommon colours.

We met old friends from home who had emigrated a year ago; it was one of the best days of our holiday.

But the lack of sleep was bound to catch up with me at some point.

Fast forward about eight hours and I would find myself in a very testing scenario in PJ O’Brien’s bar on King Street, neither unconscious nor drunk but somewhere in between.

Another friend, let’s call him Mick, landed down to the table with a liquid ultimatum: “It’s either this or the taxi, Niamh, you pick.”

Not wanting to disappoint a crowd, I drank the vodka and energy drink concoction and within minutes I was a new woman.

There is a photograph of Mick (his name is not actually Mick) passing me the drink-of-life and shaking my hand like a GAA club manager presenting a county medal to a captain and I can honestly say I have never seen myself so elated-looking in all my life.

When it became clear that I had finally overcome the rough patch, my brothers-in-arms felt it might be time to break the silence on the morning that had been.

“Christ, you were like a clucking hen sitting on those eggs,” ‘Mick’ said to the maker of Breakfast Round Three.

We laughed until our sides hurt, and none of us stepped foot in a taxi until the wee hours.

As for the pancakes? I made up for it on Shrove Tuesday, but the guilt still lingers.