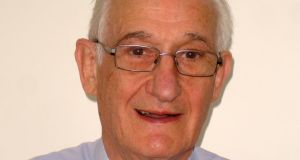 There was a distinct pattern of struggle against the odds in the life and work of Graham Neale, who has died aged 84.

Professor of clinical medicine at Trinity College Dublin from 1976 until 1980, he left an enduring mark on the Irish medical system through his work at St James’s Hospital in Dublin, and on the British National Health Service (NHS) through his championing of patient rights in the face of medical shortcomings.

Coming to Dublin from the postgraduate medicine school at Hammersmith Hospital in London, he found a situation in Ireland which puzzled him. In Britain, he told the Irish Medical Times, there was a teaching hospital for approximately every 3½ million people while in Ireland there were five.

Prof Neale faced the challenge of developing a single teaching hospital for Trinity at St James’s, where there was no tradition of academic medicine.

Antiquated buildings
“The medical faculty at TCD,” he wrote in an unpublished memoir, “had an outstanding history but had fallen far behind the times. It taught its medical students in six small hospitals spread across the city in impossibly outdated buildings.”

A plan was agreed by politicians and the university board for the rebuilding of St James’s Hospital, formerly St Kevin’s, but “the power of politicians, priests and senior doctors knew no bounds”, wrote Prof Neale.

When Charles Haughey, then minister for health, arrived at a St James’s open day he was expecting him to announce this plan, but instead heard him announce plans for a new hospital at Beaumont, in the heart of Haughey’s own constituency.

Prof Neale, nonetheless, achieved something remarkable at St James’s in the opinion of two young doctors he taught there, Davis Coakley and Des O’Neill.

Prof Neale first encountered difficulty in attracting consultants to St James’s, said Dr Coakley, as there were no private beds there.

“He had come from a background in the NHS where eminent clinicians had practically no private practice . . . He found Irish medicine complicated and very frustrating.”

But he persisted and gathered around him a small group of dedicated younger doctors. “Now St James’s is one of the most successful teaching hospitals in Europe,” said Dr Coakley. It developed against the odds “because it had a cadre of consultants who were not concerned with private practice”.

Dr O’Neill remembers Prof Neale as “a very humane, very interested teacher”. “There was a lack of pretence or showiness about him. He brought a message to the Dublin medical world it needed to hear at that time.”

Graham Neale was born the second of five children of a railway clerk and his Jersey-born wife in Hounslow, Middlesex, in 1929. Educated at Isleworth Grammar School and King’s College, London, he originally qualified as a teacher.

National service
As a teenager he had hankered after a medical career but had no qualifications in chemistry or biology and no money for fees.

After national service in the RAF, however, he used a service gratuity to prepay his fees at Bristol University medical school, where he studied the required subjects during a premedical year and from which he graduated, laden with prizes, in 1960. After a year on a fellowship in Stockholm, he worked successively at Bristol Royal Infirmary and the RPSM at Hammersmith Hospital, specialising in gastroenterology.

After Dublin, he worked at Addenbrooke’s Hospital in Cambridge, where he helped to develop a pioneering method of intravenous feeding and lectured at the university. After retirement, he continued his academic work at University College and Imperial College, London.

Later in his career Neale became much concerned with patient safety, and was a trustee of the charity Action against Medical Accidents. He was lead clinician of a renowned study, Adverse Effects in British Hospitals, which has been cited more than 1,500 times in scientific journals. He was frequently called to appear as an expert witness.