Canny security adviser who was close to Bill Clinton 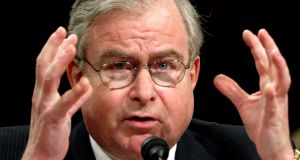 Sandy Berger, who has died aged 70, was a political confidant of President Bill Clinton who became his national security adviser and helped manage a period of fundamental transition in American foreign policy.

A stocky, sometimes temperamental and frequently humorous political operative and trade lawyer, Berger was a major figure in shaping America’s role in the world in the years after the Cold War.

In a statement, President Barack Obama called him “one of our nation’s foremost national security leaders”. Clinton said he mourned the death of “my wise and wonderful friend”.

“Nobody was more knowledgeable about policy or smarter about how to formulate it,” Clinton said, speaking for both himself and former secretary of state Hillary Clinton.

Berger played a critical role in the strategy to use American power, and air strikes, to end conflict in the former Yugoslavia. He drew on his experience on Capitol Hill to lobby Congress to allow China into the World Trade Organisation, part of a big gamble by the Clinton administration that it could involve the country in a web of Western-based rules and so infludence its behaviour.

He also broadened the definition of what constituted national security, having his expanding staff at the National Security Council address the security implications of water shortages, global warming and epidemics.

He did not bring deep foreign policy experience to the White House when he joined Clinton’s new administration in 1993. He first became a deputy to Anthony Lake, the president’s first national security adviser, then succeeded him in the second term.

“It isn’t that he didn’t have grand ideas; he certainly did,” former secretary of state Madeleine Albright said. “But he was a problem solver and somebody who was able to see how to get from here to there.”

Susan Rice, Obama’s national security adviser, who worked for Berger from 1993 to 1997, said he had brought “a lawyer’s precision” to the job. “If you are in the Obama National Security Council, and you are 50 or older, you probably learned all this by sitting across from Sandy 20 years ago.”

After the 9/11 terrorist attacks in 2001, Berger, appeared before the commission formed to investigate them to testify on what kind of warnings had been passed to his successor, Condoleezza Rice, and by implication whether Berger and his colleagues had done enough to address the rising threat of al-Qaeda in its sanctuary in Afghanistan.

During the investigation, Berger went to the reading room of the National Archives in Washington, gathered several documents related to the Clinton administration’s handling of an al-Qaeda plot and spirited them out of the building.

A prosecutor found that while Berger had destroyed some of the papers, he had taken only copies, so nothing was permanently lost. Berger pleaded guilty to a misdemeanour charge, paid a $50,000 fine and temporarily lost his security clearance.

Samuel Richard Berger grew up in Millerton, New York, where his parents ran an army-navy store. He received a bachelor’s degree from Cornell and a law degree from Harvard.

He met Bill Clinton as a speechwriter for George McGovern’s 1972 presidential campaign. He worked in the State Department during the Carter administration and was also a foreign policy aide in Michael Dukakis’s 1988 presidential campaign. He is survived by his wife, Susan, a son, Alexander, two daughters, Deborah and Sarah, and five grandchildren.