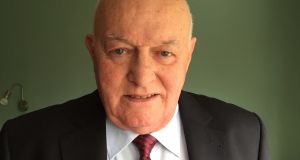 Brendan O’Donoghue was renowned for his dynamic managerial style and his appreciation of scholarship.

Brendan O’Donoghue, who has died just short of his 78th year, was an accomplished civil servant who had a significant positive influence on the National Library of Ireland and other cultural bodies.

Having reached the position of secretary general at the Department of the Environment at the relatively young age of 48 and following the then stipulated seven-year term, he moved in 1997 to become director of the national library for the following six years.

He restored longer opening hours in the reading rooms, increased staffing levels and promotional opportunities, and established links with other libraries during his tenure

As director, O’Donoghue oversaw the acquisition of collections of Joyce manuscripts and the personal libraries of William Butler Yeats, both of which led to exhibitions at the national library. The personal library of Sean O’Casey and the papers of Brian Friel were also acquired by the library during his time at the helm.

Renowned for his dynamic managerial style and his appreciation of scholarship, he restored longer opening hours in the reading rooms, increased staffing levels and promotional opportunities, and established links with other libraries during his tenure.

O’Donoghue was also the guiding force behind the establishment of the National Photographic Archive which opened in Temple Bar in 1998. As chief herald, he developed a stricter approach to the issuing of heraldic coats of arms, putting an end to spurious claims to ancient Irish titles that the library had previously sometimes accommodated.

While director of the national library, O’Donoghue was also a trustee of the Chester Beatty Library and a member of the Irish Manuscripts Commission. As chairman of the board of the Irish Architectural Archive from 1997-2001, he supported the development of the Dictionary of Irish Architects. And as chairman of the editorial committee of the Royal Irish Academy’s (RIA’s) Dictionary of Irish Biography, he displayed a keen determination to see projects through to their conclusion.

He remained a member of the RIA until his death.

The eldest of five children of Liam and Mary O’Donoghue from Bandon, Co Cork, O’Donoghue attended St Augustine’s College, Dungarvan, Co Waterford, as a boarding student and, following a brief spell at University College Dublin, he joined the Department of Social Welfare in 1960.

The restoration of the Customs House (which housed the Department of the Environment) to mark its bicentenary in 1991 was also one of his responsibilities and he joked that of all the thorny issues he had to negotiate, reducing the car parking around the building was one of the most difficult.

O’Donoghue’s strong professional interest in buildings and infrastructure led him to write scholarly books on engineering (In Search of Fame and Fortune: The Leahy Family of Engineers, 1780-1888 and The Irish County Surveyors, 1834-1944) and his biography Activities Wise and Otherwise: The Career of Sir Henry Augustus Robinson, 1898-1922.

Aware of how much of the structure of the Irish Civil Service was built on what the British left behind, O’Donoghue saw himself as a successor to Robinson who served as vice-president to the local government board as part of the British civil service in Ireland before the foundation of the Irish State. Contemporary historians have drawn on his assiduous research into Robinson’s career to understand how the Border between Northern Ireland and the Republic was first drawn up.

Brendan O’Donoghue lived with his wife, Bernie, in Mount Merrion, Dublin since the 1970s where they were active members of their local community and church. He is survived by his wife, Bernie (nee Aylward) and daughter, Keelin.