Irish schoolgirl singing ‘Hallelujah’ on US TV gets 11m views

A performance of "Hallelujah" by Kaylee Rogers, an 11-year-old singer from Co. Down, on US television show "Little Big Shots" has gone viral, receiving over 11 million views online. Video: Beefy TV/NBC 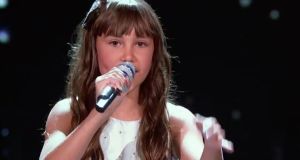 A performance of Leonard Cohen’s Hallelujah on US television by a 11-year-old Co Down girl has been viewed millions of times online.

Kaylee Rogers, who shot to fame in 2016 after a video of her performing the song at a school concert attracted more than 100,000 views, appeared on NBC’s Little Big Shots on Sunday.

In just three days her performance has been viewed 11 million times on Facebook.

Posting on her own Facebook page, the Donaghadee native said she was “truly blessed” and thanked everyone for their support, including Grammy Award winners Pentatonix who joined her on the show midway through the song.

Kaylee who has autism and ADHD, started to sing at age three. She is a student at Killard House Special School and the 2016 video was recorded as part of the school’s Christmas show and apparently only made it online because Kaylee was too ill to perform at a church carol service.