‘We’ll shout and we’ll fight and we’ll be heard and we’ll win! And the Forty Foot is a nice place to swim!’ 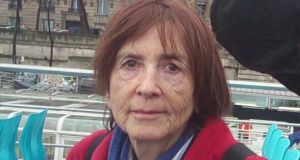 Rosine Auberting: “What we said when asked what we would do if men took off their trunks is that we would simply take off our bathing suits too.”

Back in the wild and unbridled Seventies (oh how they are missed!) Rosine Auberting left Paris for Dublin, where she became an integral cog in Irish feminist politics.

On the Liffey, times were ripe for an uncompromising, no-holds-barred French feminist who soon discovered the tradition of male nude bathing at Sandycove’s Joyce Tower in the Forty Foot gentlemen-only area.

She declared herself disgusted at “this bastion of male chauvinism” and the threat of their “heavy artillery,” a view that is quoted in the Irish Times “100 Women” podcast.

So on July 20th, 1974 she led the Women’s Lib four-week invasion of the well-known swimming spot to protest at this “ridiculous form of prejudice”. After rumours of mass feminist nudity in Dublin Bay began to circulate, she came under attack for being unladylike – a charge that Rosine, daughter of a French resistance leader and an ex-Chanel seamstress-cum-tobacco seller, hotly denied but rather enjoyed too.

“What we said when asked what we would do if men took off their trunks is that we would simply take off our bathing suits too.”

“Remember this! We are not ‘Ladies!’ We’ll shout and we’ll fight and we’ll be heard and we’ll win! And the Forty Foot is a nice place to swim!” she wrote in Women First, afterwards earning a scornful rebuff from then editor Christina Murphy (and neither of them may have known it was a known gay haunt!).

I first met Rosine in my teens, when I would save up £10 for the ferry to go to stay with her and her mother off the rue Vaugirard in school holidays. .” Rosine introduced me to Paris bars and Rochers Suchard.

She showed me all Paris from Les Puces by day and onion soup at Les Halles by night (most of the night, including the demi-monde). Rosine delighted in teaching me French, with all her rollicking wit and many quotes, including the words to Le Tourbillon de la Vie and Piaf songs. Her mother cooked like Escoffier, and introduced delights I’d never dreamt of, such as artichokes and îles flottants.

Rosine’s capacity for friendship was equaled by her capacity for driving people mad – yet she was always forgiven, because people recognised her vulnerability and essential warmth and generosity of spirit.

“The patron saint of oppositional defiance, were she not a heretic,” is what another friend called her. “But on our stay in the Dordogne I found her hugging our old and rather sickly chestnut tree. “If you give them love they give you love back, you know,” she said.

“Humorous (tick!), intelligent (tick!), sharp as a needle (tick!), opinionated yet still humbly able (if only in retrospect) to laugh at herself. Exhilarating at her best, infuriating at her worst,” wrote her close friend from Gweedore, where she spent some of her happiest times.

Another friend compares Rosine’s own to Swift’s “savage indignation”. A nun who became her friend in recent times found her an invaluable contrarian, forcing stringent re-examining of beliefs and attitudes.

She certainly loved argument, I attest to that, and was fiercely secularist in the French way. I argued with her for weeks about her opposition to hijabs worn in school (there are worse things!).

At a lecture in Dalkey last summer when two Muslims were arguing that their religion gave full equality to women, she quoted chapter and verse from the Koran, which seemed to assert the exact opposite. “How do you reconcile your belief with this scripture?” she asked.

She had been teaching English at the Berlitz School in Paris for many years, a job she loved and excelled at – and also for a period at La Santé, one of the most infamous high security prisons in France. She spent a year in China teaching English and, in her absence, generously allowed friends and children of friends, free run of her Montparnasse apartment back in Paris.

She was happiest in the years spent teaching, although forever concerned that off-pronunciation in her near perfect English might expose her. (Berlitz ruled that only native English speakers could teach English – a rule Rosine triumphantly flouted.)

One of her last jokes, around five days before she died, came when she rang about seven times with her final requests, starting the seventh with “Guess who?! Oh, of course my accent gives me away!”

In her last months she told very few people she was ill and just spent time travelling, visiting friends and enjoying life with zest, being exhilarating at her best and annoying at her worst. But forgiven, and sorely missed.

She died of liver cancer on March 10th in a hospice called (poetically) Hôpital Cognac. You might say she died as stylishly as she had lived.

Wary of over-medicalisation at life’s end, she decided against all treatment. She could have been any doctor’s worst nightmare, but all her doctors were very fond of her and respected her hugely, they say. Her last doctor at the hospice, Doctor Tessier, loved sitting down for long enlivening conversations with her and was really sad when two days before she died she simply stopped talking. So unlike her.

She was grateful for the wonderful care she got in the hospice and the support from her many Irish friends, and sad only that this isn’t afforded to everyone, saying one day, “I didn’t realise I was loved, foolish me”. She was, they added, in no pain and the hospice gave her peace from her constant anger. But she was too weak for visitors. The Donegal friend sent all of us friends her message: “She loves you and always has.”