Anna Geary: “My message to media on women in sport? Show it and they will support it” 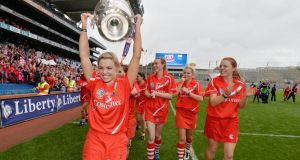 I was having a conversation last week with some friends and the topic of women’s sports came up, more specifically the challenges we sportswomen face. Some of my non-sporting friends rolled their eyes, quietly muttering “not this again”. But the only potential boring thing about this debate is how many times we’ve heard it.

We keep on hearing about the lack of exposure, sponsorship, coverage, recognition, but will we witness dramatic improvements if we, as women, keep classing ourselves as different? What I mean is, we are sportspeople. Women yes, but sportspeople none the less. The term “men in sport” is rarely used, yet I too am guilty of often using the term “women in sport”. Why don’t I just say sportswomen or women’s sports?

There might be a difference in how women compete, but that does not mean we are inherently different athletes, or inferior athletes? Realistically, there is a difference in size, in strength, in speed. But not in the skill, commitment, athleticism or sporting intellect.

Rather than addressing the reoccurring argument of what needs to be changed, perhaps we should turn our attention to why things need to change.I have no interest in being negative. Greater appreciation and recognition of the sporting achievements of our female athletes and teams is slowly the attitude being fostered by our country. This has to be seen as an encouraging development but it is slow.

Recently, I was at the inaugural event organised by Seifa Ireland, Supporting Elite Irish Female Athletes, which was set up to address the increased need for support for our elite Irish sportswomen.

On the night, a charity Vintage Couture calendar unveiled 16 powerful and striking athletes. These leaders in their respective sporting fields have the power to influence, to inspire and to elicit a change in the perceptions within our society. Yet at the moment, many of them are unknown.

These athletes are wonderful role models for everyone, young or old; male or female. They possess the characteristics necessary to succeed in life, not just in sport. They need to be celebrated and they need to be seen. To quote one of the core messages of the Women’s Gaelic Players Association “If you can’t see it, then you can’t be it”.

Awards specifically dedicated to women like The Irish Times Sportswoman of the Year awards are not in place with the purpose to segregate sportsmen and sportswomen. They were introduced because women are seldom chosen above men for awards in the sporting world. I won’t say never, it’s just a rare occurrence. But this has a lot to do with how recognisable our sportswomen are compared to their male counterparts.

A lot of the time you don’t hear about the sportswomen and their achievements. Look at women’s rugby. People only started to take notice of the incredible Irish Women’s rugby team when they defeated the All Blacks in the World Cup in Paris last year. They were doing trojan work for their country for years prior to that. To think that same Irish team had no sponsor during their Six Nations Grand Slam-winning season in 2013 - what a lost opportunity.

It makes business and financial sense to get involved as women’s sports are gaining momentum. Each business has the power to cause positive change in the sporting landscape. It has already started. Liberty Insurance’s sponsorship of the Camogie Championship placed Camogie and Hurling on a platform side by side. Likewise, AIG became the first sponsor of Dublin GAA to include ladies football and camogie. VHI Healthcare announced a partnership with the Women’s mini marathon. AON are now sponsors of the Irish Women’s Rugby squad and Continental Tyres became the official partner of women’s soccer in Ireland. Rob Hartnett, Sport for Business Founder, described women’s sports as a “green field” of opportunity for potential sponsors. Businesses could do a lot worse than to follow suit and tap into this unsaturated market.

According to the latest results for 2013 from the Irish Sports Council, almost 1 in 3 women met the National Physical Activity Guidelines through sport with almost 43 per cent of women in Ireland are now taking part in regular sport which is much higher than in previous years. That 43 per cent is equivalent to over three-quarters of a million adult women participating in sport on a weekly basis. You would wonder if that increase has a direct connection to the increased coverage given to women’s sports in mainstream media in recent years.

Young women and teenage girls are inundated with confusing and contradictory messages on social media about body image and perceived “beauty”, so now more than ever our top female athletes can serve as great examples.

The memorable line from the Kevin Costner film Field of Dreams was “If you build it, they will come”. This film was about far more than bringing baseball heroes out to play. It was about belief and perseverance. But my message to the media is along similar lines “If you show it, they will support it”. Excellence is not defined by gender but by itself. If you don’t remember anything else, remember that.

The Irish Times Sportswoman of the Year awards take place in Dublin on the 18th of December. The paper runs two pages on women and sport every Thursday, including a weekly column by Sonia O’Sullivan.