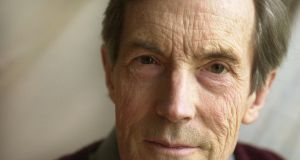 The poet Richard Murphy, who has died in Sri Lanka, established his reputation with The Last Galway Hooker, a poem inspired by his experience of buying and restoring a sailing boat of traditional design.

Dylan Thomas, Milton and Wordsworth were early influences. His work had a strong regional dimension, and he was firmly committed to accurate historical narrative – a commitment clearly evident in one of his best-known works, The Battle of Aughrim.

He did not conform to the conventional image of a poet. Harold Nicolson, introducing him to the art critic and historian Clive Bell, said, “Richard is a poet who doesn’t drink, doesn’t smoke, and doesn’t, as far as we know, do anything else.” “Then,” declared Bell, “he can’t be a poet.” He stood out from his peers in 1950s literary Dublin. Anthony Cronin remembered him as “a tall, lissom Anglo-Irishman who seemed a bit like a lamb that had strayed into a den of wolves”.

He was born at Milford House, Co Galway, the third child of William Lindsay Murphy and his wife, Elizabeth Mary (née Ormsby). One of his ancestors, through an illegitimate line, was Charles I; his family was also related to Patrick Sarsfield. Part of his early childhood was spent in Ceylon, now Sri Lanka, where his father was the last British mayor of Colombo. On his return to Ireland he attended Kylemore Abbey School and was later a boarder at Baymount Preparatory School, Dollymount, Dublin.

In 1937 he began studying music as a member of the Canterbury Cathedral choir. He became a senior chorister in 1940 and saw his future as a composer. However, the second World War interrupted his studies and he returned to Ireland following the evacuation of Dunkirk.

On winning a scholarship to King’s School, Canterbury, he spent four terms there, continuing on to Wellington College where his teachers included the historian Raymond Carr. He rejected the school’s – and his family’s – military traditions in favour of pacifism and began to write poetry.

In 1944 he won a demyship to Magdalen College, Oxford, where he studied English and literature under CS Lewis. He left Oxford to live in Connemara, but returned and finished his BA in 1948, earning his MA in 1955. In the late 1940s and early 1950s he worked at a variety of jobs, ranging from insurance broker in London to water bailiff on the Erriff river. He also contributed reviews to the Spectator and the Times Literary Supplement.

Winning the AE Memorial Award in 1951 enabled him to rent a cottage in Connemara for two years. The previous tenant was Ludwig Wittgenstein, some of whose letters he found in the turf shed. He would later write a poem, In Memory of Wittgenstein at Rosroe, in tribute. In 1953 he taught English in Crete, and during the following year he took a course on French civilisation at the Sorbonne where he met his future wife, Patricia Avis. The couple visited Brittany and Crete and married in 1955, the year his first volume of poetry, The Archaeology of Love, was published. The marriage ended in divorce in 1959.

In pursuit of a more active life, Murphy bought the Ave Maria, the boat that inspired The Last Galway Hooker, and started a fishing and tourism business in Cleggan. He bought a second hooker, The Truelight, in 1961 and his business helped to revive Cleggan’s fishing industry that had gone into decline following the 1927 storm described in his poem The Cleggan Disaster.

On selling The Truelight in 1964 he did little sailing thereafter. In 1966 he completed the building of a house at Cleggan, and in 1969 purchased High Island where he could work in solitude. He built a second retreat on nearby Omey Island in 1974. Among the visitors he entertained in Cleggan were Ted Hughes, Sylvia Plath and JR Ackerley.

Plath tried to seduce Murphy; Hughes later became his best friend. Another visitor, the American poet Theodore Roethke, refused to leave Inishbofin and had to be carted off to Ballinasloe mental hospital after a week-long drinking bout. The sudden death of a close friend, Tony White, in 1976 affected Murphy deeply and he decided to move to Dublin.

By this time, The Battle of Aughrim (1968) and High Island (1974) had consolidated his reputation. The Battle of Aughrim, originally commissioned for radio by the BBC, had as its central theme the bridging of Ireland’s two cultures. The title poem is a long narrative about the decisive Protestant victory over Catholic forces in 1691. His ancestors had fought on opposite sides and Murphy declared, “My underlying wish was to unite my divided self, as a renegade from a family of Protestant imperialists, in our divided country in a sequence faithful to the disunity of both. The poetry was to occupy a no man’s land between music, myth and history.”

The clash of cultures was the theme of the other poem in this volume, The God Who Eats Corn, which centred on his father’s retirement in Rhodesia after a career in the British colonial service. Connemara was the setting for High Island, which focused on a personal exploration of the self.

The Mirror Wall (1989) was the result of a visit to Sri Lanka after an absence of 50 years. The poems were inspired by, and adapted from, Sinhala songs inscribed at the base of frescoes in the eighth, ninth and tenth centuries, and reflected Murphy’s interest in language and communication between cultures. Appalled by the political violence that he witnessed during his visit, he became the legal guardian of five young Sri Lankans whom he brought to Ireland for their safety.

Other major works included The Price of Stone (1985) and Collected Poems (2001). A recording of The Battle of Aughrim, with music by Seán Ó Riada, was issued in 1969. “Never mind that the poem’s balance of opposing forces was dissolved by Seán’s Irish nationalism.” Murphy recalled. “He didn’t want his music to reconcile the ancient conflict, but to win.”

In 1968 he met Charles Haughey, who was then minister for finance. When Haughey heard that he was the author of The Battle of Aughrim, he expressed surprise: “I thought that was written by an Irishman.” When it was explained that Murphy was indeed Irish, and living in Connemara, Haughey said, “We must give you a grant.”

He was literary adviser for a production by Michael Cacoyannis of Yeats’s version of Sophocles’ King Oedipus at the Abbey Theatre in 1973. A regular broadcaster on RTÉ and the BBC, his work is included in many anthologies. He taught in many American and English universities. He was a recipient of the American Irish Foundation Award, the British Arts Council Award and the Marten Toonder Award. He was a Fellow of the Royal Society of Literature. His autobiography, The Kick: A Life Among Writers, was published in 2002 by Granta and republished by Cork University Press last year. The collection The Pleasure Ground: Poems 1952-2012 (2013) is his most recent publication.

His childhood in Ireland was documented in The Other Irish Travellers, a BBC documentary made by his niece, Fiona Murphy, in 2012.

At the Yeats International Summer School in 2007 he advised fellow artists, “Never mind the bum notes, keep the music going until the end.”

His daughter Emily and son William survive him.

How do I convince my wife that I’d be a great stay-at-home dad?
Real news has value SUBSCRIBE