Alastair Campbell: ‘Brexit is casting a dark shadow over everything’ 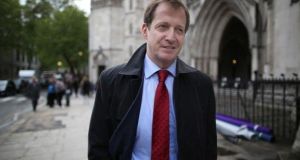 “The government at Westminster is utterly, totally, taken up with Brexit. That’s where the really dark shadow is coming from,” says Alastair Campbell, reflecting on the year-long political stalemate in Northern Ireland.

“It’s casting a shadow over everything,” he tells Róisín Ingle, on the latest Róisín Meets podcast.

Tony Blair’s former director of communications says the situation regarding Northern Ireland and the threat to the peace process is becoming “more and more alarming”, citing comments made by the Labour MP Kate Hoey this week, in which she claimed that the Good Friday Agreement had nothing to do with Brexit.

The suggestion that the agreement has “effectively had its day” is worrying, he says, and threatens to overshadow its 20th anniversary on April 10th.

Mr Campbell is also baffled by the media attention given to the Tory MP Jacob Rees-Mogg in the Brexit debate, warning that while he seems “ridiculous and unreal,” his political views are “very, very dangerous.”

“I think we have to be very careful about what we want from our politicians.

“How did Boris Johnson become London Mayor? Well, people said: ‘I think he’s a bit of a clown, but he makes me laugh.’ Well now he’s the foreign secretary,” he says.

Mr Campbell was on the podcast to discuss his latest book Saturday, Bloody Saturday, a novel blending football with terrorism, which he co-wrote with former Burnley FC footballer Paul Fletcher.

To ensure the actions of the IRA characters in the book were believable, Mr Campbell sought out the late Martin McGuinness’s advice.

“I just wanted him to read it and tell me if there was anything absolutely ridiculous in it,” he says.

On the legacy of his old boss Tony Blair, Mr Campbell says history will look more favourably on the former British prime minister, but he does feel sad that he comes in for harsh criticism for his role in the Iraq war.

“I think he’d prefer if people didn’t hate him, those that do. I don’t mind being hated by some people. I don’t want to be liked by the Daily Mail,” he says.

Something else he does not mind either, is the comparison frequently drawn between himself and the Malcolm Tucker character of Armando Iannucci’s TV show The Thick of It.

“I think it’s a huge honour,” he laughs.

Also on the podcast, Mr Campbell says he is “broadly supportive” of the MeToo movement, “not least because if I wasn’t my daughter would give me hell.”

He says he rejects claims that the movement has gone too far, or that it could stop people from having normal relationships.

“If I think about attitudes to women and to ethnic minorities, to gays and to disabled people as well I have to say, back in the days when I was a young journalist, it was terrible on every level.

“I think there’s been massive progress, but unless you keep pushing at it, there’s a danger you slip back.”

Bridgestone’s connected tyre could be a safety breakthrough
5