Family Fortunes: ‘Darling,’ he called as he opened the apartment door. A stunningly beautiful woman appeared, her eyes, a lustrous violet 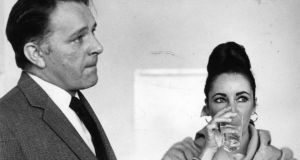 Richard Burton and Elizabeth Taylor waiting at Dublin Airport after he played the lead role in ‘The Spy Who Came In From The Cold’. Photograph: Jimmy McCormack

It was March, 1965, about nine o’clock in the evening. Kay and I were just finishing our meal when a sudden cold draught caused us to look towards the open door. A man of medium height, hatless, collar turned up against the wind and rain entered the small restaurant situated just outside Bray on the Dublin road.

He strode across the dining room to the cash desk and spoke to the waitress in a low modulated voice, an English accent perhaps – we could not really hear what he said except for the word taxi. He went to a public telephone on the wall near us and dialled a number. A short conversation ensued, again we heard the word taxi – then an exclamation of, “an hour”. He put the phone back, walked to the door and out into the wind and rain.

We paid our bill – dashed to the car and turned towards Dublin. Within a short distance the headlights picked out the figure of the man from the restaurant, walking towards the city.

Should I offer him a lift?

“How very kind of you,” he said, and we were on our way. He said he was going into Dublin and so were we – he would be most grateful. He said his name was Richard. “Taxis,” he said, “were quite impossible, virtually unobtainable, and in this weather” and so we continued with light conversation.

After a short while he asked if we would be passing a public house – he needed to make a phone call and perhaps we would join him for a drink. The Horse and Hounds in Cabinteely was ahead, and so during a quick drink we discussed the Rugby match due to take place the following day between Ireland and Wales.

When we reached the city centre he told us he was staying in the Gresham Hotel and he would very much like us to come in and meet his wife. In spite of looking somewhat dishevelled, he was beginning to look familiar, and we were intrigued.

We entered the lift and I noticed the button he pressed was for the Penthouse.

“Darling,” he called as he opened the apartment door. A stunningly beautiful woman appeared, her eyes, a lustrous violet.

“Elizabeth,” he said I would like you to meet Kay and Tom.

So began our evening with Elizabeth Taylor and Richard Burton.

(We later learnt that the feature film The spy who came in from the cold was being shot in Ardmore Studios outside Bray during that period. Richard Burton was playing the leading role. We didn’t recognise him perhaps because he was pretty wet and dishevelled. Why he was walking, he didn’t say and we didn’t ask.)

The five ‘hidden’ reasons that stopped me losing weight
10