‘I felt something furry move under my hand. Man alive, I am terrified of rats’ 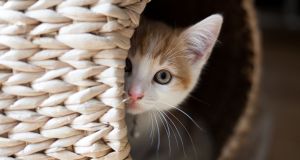 ‘As rationality slowly kicked in, it occurred to me that the furball slumbering on the three-ply quilted rolls might actually be the cat.’ Photograph: iStock

It wasn’t the greatest of days. The trouble began when, having stumbled out of bed in the middle of the night to have a pee and not bothered to turn on the light, I reached into the basket of bog rolls and felt something furry move under my hand.

I don’t know if you saw the reports recently that described rats, supposedly big enough to throw a saddle over, roaming Dublin’s suburbs in maundering gangs. Necking cans of Prazsky on Dollymount Strand, queuing up for battered sausages and chips outside neon-lit burger bars, they sound like they’re just short of getting the last bus home to crouch under the couch and watch Match of the Day.

Me, I read all about those bucking broncos. More than that, I listened slack-jawed to accounts of multiple city-centre sightings of whiskery snouts and yellowing teeth, and of hearing the scuttling pitter-patter of four-toed “hands” and five-toed “feet”.

Man alive, I am terrified of rats. They slither through letterboxes, swim up into toilet bowls, gnaw through brick with teeth tougher than iron, urinate on beer crates – and bite. You might think you’re the cat’s pyjamas, swigging your designer ale at your socially distanced barbecue, rotating your vegan sausages and chatting about your brush with holistic dentistry, but you better have washed your bottle tops, mate, or you might be in for some nasty ratty surprises.

Anyway, back to the lavatory, where I’m leaping (less than athletically) off the privy at 3am, my imagination whipped to life by false perceptions of pinkish tails. It’s extraordinary how the mind springs to catastrophising wakefulness in the witching hour.

Clinging to the lampshade, as rationality slowly kicked in, it occurred to me that the furball slumbering on the three-ply quilted rolls might actually be the cat.

It was the shagging cat. She looked up at me, blinked her gummy eyes in disdain, yawned and went back to sleep again.

She’s been a bit off-colour recently, picking at her food, sleeping a lot, sitting slumped on a chair in the backyard with a glass of cheap Pinot Grigio, lazily watching the birds peck at the suet balls.

Nothing seems to rouse her very much these days, not even a zinging article I read out from a gossip magazine, yellowed by sunlight and dampened by summer rain, about Gwyneth Paltrow’s difficulties maintaining intimacy during lockdown.

“Oh look,” I said, “Gwynnie and her shiny new spouse are experiencing some marital tensions while living in close quarantine with her children Mungbean and Celeriac.”

The cat flicked her mangy tail, squinted at a feasting blue tit.

She’s just old and disenchanted. She’s just sick of lockdown and wondering whether she has the energy to start again

Gwynnie, I told her, feels that “there is quite a lot of stress that just comes from trying to recalibrate to this new normal and this level of proximity”. Um-hum, said the cat’s expression as a pigeon in military grey helicoptered into the yard and landed on the gravel to peck at crumbs of dropped suet.

I continued reading aloud. “Where do you go as a couple when you’re all in the house and you’ve got dogs and you’re trying to work? ... How do we find intimacy in uncertain times?”

“How indeed?!” I asked, watching the cat’s complete indifference to the aviary of laughing birds. “So Gwynnie is tripping over her dogs in her various luxury homes, eh? Can’t be easy deciding whether to live in the Hamptons or rough it in LA, and never mind dogs and children, what about the horses and the staff and the vats of blended wheatgrass?

“Can’t be easy to find a bit of space in your various gaffs to sip your Siberian mushroom tea with your doe-eyed husband, Brad, a man with a selection of alpaca geansaí in his wardrobe, each and every one spun from cuckoo spittle and hand-knit by a tribe of knee-socked Arctic geese.”

The cat slept. The birds fed. The clouds gathered. Casting the magazine aside, I went indoors and phoned the vet, explaining the various other symptoms I’d noticed in the past few weeks, and was given an emergency appointment for the next day.

“An emergency appointment?” I asked. “Are you sure? She’s just old and disenchanted. She’s just sick of lockdown and wondering whether she has the energy to start again. She’s just a bit, I don’t know, disorientated – but aren’t we all?”

“We’ve had a lot of sick cats come in to us recently,” the vet said, somewhat mysteriously. “Bring her in. We’ll see what we can do.”

Readers on overseas travel: ‘I am responsible enough to go and manage the risk of Covid’
6

Irish holidaymakers have been thrown under the bus
8

Expert tips: A psychotherapist on how to look after your relationships
Real news has value SUBSCRIBE