Sean Moncrieff: Go on holiday? Are you nuts?

In the not too distant future, it may be possible to visit Spain or Italy. But would you? 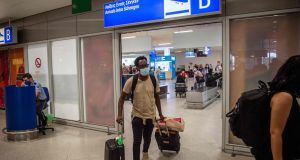 Yes, there may be an element of reproach, or even competition in this. There’s rarely a situation where Imaginary Mammy and Daddy don’t do things better. Daughter Number One recently moved out and into a house she’s sharing with friends. When Daughter Number Four learned that her sister has a new house, she announced her Imaginary Mammy and Daddy are looking for a new house too. One full of toys. (She has plenty of toys. Believe me.)

The very notion of travel seems tainted. I want to go away, and I don’t

However, Daughter Number Four’s absolute favourite flight of parental fantasy involves going on holidays. On this dream vacation, there are playgrounds, a swimming pool, a cinema with popcorn (for her, what’s consumed is more important than what’s viewed), and a pink holiday house.

This one emerged shortly after we had taken a weekend trip last year to Center Parcs. Full disclosure: it was a freebie, taken up, as far as we could see, by every single member of the Irish media. There was a volcano eruption in Mayo that weekend, but you don’t know about it because all the journos were cycling around a forest in Longford.

As the country opens up – with more of it coming on Monday – even Daughter Number Four has detected that things are getting back to what we used to call normal. And the occasional gap in the rain-bulged clouds has tipped her off that it might be summer. She’s started to ask about holidays. Every day. Can we go on holidays tomorrow?

I’d love a holiday. In theory. Every time I switch on the TV and it’s tuned into the Chromecast my heart gives a little flutter when I see pictures of places around the world: places I visited once, not wearing a mask, touching things with wild abandon. Yet now the very notion of travel seems tainted. I want to go away, and I don’t.

We could take a break in Ireland. But with all the restrictions, hotels don’t sound like much fun. (And it seems they’re all booked up now anyway). A staycation at home? No.

In the not too distant future, it might be possible to visit the likes of Spain or Italy. But would you? There’s getting on a plane, with all those other bodies, walking down beautiful but terrifyingly narrow Mediterranean streets, stuffed with disease-carrying teenagers. You can’t eat outside: anyone could just sneeze into your dinner. Would we have to wear masks on the beach? Can you get waterproof ones?

Here’s the holiday I want. I don’t care about location. It’s one where I can hug people, touch random bits of metal, stand in crowds and not be anxious

For the lockdown we all had to learn new habits: a sort of benign neurosis where we had to regard other people as a potential threat. It was weird and unnatural, but switching back now also feels strange. Each easing of restrictions has meant more cars on the road, more people on the streets. More of that threat. It’s upside-down world.

I missed seeing other people. But now that they’re back, they make me nervous. Before, anyone wearing a mask looked vaguely suspicious. Now anyone showing off their face is a danger and deserving of our imperious judgment. The simple act of walking down the street is mentally exhausting.

Here’s the holiday I want. I don’t care about location. It’s one where I can hug people, touch random bits of metal, stand in crowds and not be anxious, be able to say: Daughter Number Four is looking forward to starting school in September. On a specific date that has already been announced. She can’t wait to make new friends. To live, for a little bit, like none of this ever happened.

I think my boyfriend broke up with me because I was diagnosed with herpes. I’m devastated
7

It’s our 20th wedding anniversary. I wonder will he remember
9