‘Nudity is a great leveller’: Why Germans love to get naked 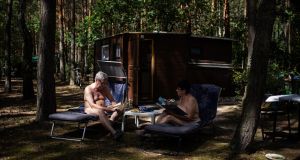 The first time Michael Adamski saw his mother-in-law naked it was awkward. But it wasn’t as awkward as seeing his boss naked.

Adamski, a police officer in Berlin who investigates organised crime, first started going to a nudist camp at a lake outside Berlin after he met his wife, whose family owned a cabin there.

One weekend, when he had just about gotten used to stripping in front of his in-laws, he bumped into the highest-ranking colonel in his precinct – who promptly challenged him to a game of table tennis. They have been on first-name terms ever since.

“Once you’ve played ping-pong with someone naked, you can’t call them ‘colonel’ anymore,” Adamski says as he prepared to join a triathlon where the swimming and running portions of the race were naked. “Nudity is a great leveler.”

Germans love to get naked. They have been getting naked in public for over 100 years, when early naturists rebelled against the grime of industrialisation and then the mass slaughter of the first World War.

“Free body culture” – basically bathing the whole body in water and sunlight while preferably also doing some exercise – became the battle cry for a healthy, harmonious lifestyle and an antidote to a destructive modernity.

Adamski’s camp, founded in 1921, was the first licensed nudist club on a lakeside in the country. Nearly 100 years later, entire stretches of German waterfronts are designated as nudist beaches. There is a nudist hiking trail. There are sporting events from nude yoga to nude sledding. German saunas are mixed and naked. People regularly take their clothes off on television, too.

To a relative newcomer like my British husband, all this nudity can be disconcerting. When I took him to a sauna a short drive south of Berlin the other day, he didn’t know where to look.

Naked bodies floated on top of the water in the saline pool and lounged on submerged seats around the pool bar. They lined up for ice cream in the garden area, wearing only flip-flops and sun hats and, in one case, a T-shirt (but no trousers).

Just when we thought we had seen it all, it was time for Zumba in the main pool. Naked.

I knew I had to write something about naked Germans when I happened upon a whole field of them sunbathing on my way to work. This was in the Tiergarten, Berlin’s equivalent of Central Park, which runs adjacent to the office of chancellor Angela Merkel, herself a long-standing sauna fan.

One story Germans love telling about Merkel is that on the night the Berlin Wall fell, she stuck to her weekly sauna appointment before heading across to the west for a taste of freedom.

Maybe that’s because in Germany getting naked has itself quite a lot to do with fighting repression.

“It’s all about freedom,” says John C Kornblum, a former US ambassador to Germany, who has lived here on and off since the 1960s, and was once shouted at by a naked German for not taking off his swimming shorts in a whirlpool.

“Germans are both afraid of freedom and deeply desire it,” Kornblum says. “But hierarchy and rules are so embedded that direct political or social dissonance is simply not thinkable.”

Although there are nudists around the world, no other country has developed a mass nudist movement

“When people walk down the beach naked, it allows them to feel a little rebellious,” he says.

The Nazis tried to root out nudism, and so did the Communists, briefly. To no avail.

A lot of Germans don’t get naked in public, but nudists are ubiquitous enough that the practice has entered the national psyche.

“Most Germans find it totally normal to be naked in the sauna, see bare breasts on the beach and naked children in the paddling pool,” says professor Maren Möhring, a cultural historian and nudism expert at Leipzig University.

Although there are nudists around the world, no other country has developed a mass nudist movement, Möhring says. “It is a German exception,” she says.

And when someone, somewhere, tries to change the taboo against nudity, that person is likely German, Möhring added.

The first nudist congress in New York was organised by a German immigrant, she says. German nudists also tried to colonise pockets of South America.

It’s not just my husband and a lot of Americans who struggle with nudity.

A few years ago, the German beach resort of Ahlbeck on the Baltic Sea agreed to move its nudist beach 200 metres westward, away from the border with Poland, “to stop irritating Polish beach-goers,” explained Karina Schulz of the local tourism board. In theory the border was invisible after Poland joined the European Union. In practice there was a neat divide between (Polish) swimwear and (German) skin.

One key to Germany’s relaxed attitude toward nudity, says Möhring, is that from the start nudism was sold as something utterly asexual. Bikinis, the argument went, sexualise the body. “Nudism is about the cult of the natural,” she explained.

Or, as Stefan Wolle put it: “It’s the most unerotic thing in the world.” Wolle helped curate an installation about nudism at the DDR Museum in Berlin, which features exhibitions about life under Communism in the Deutsche Demokratische Republik, as East Germany was known.

Being bombarded daily with often-photoshopped images of models’ bodies in social media posts and ads, it was an eye-opener for me to hang out with a cross-section of naked people in the real world. As my husband remarked in the sauna: “The perfect body does not exist.”

At the same time, all those naked Germans I encountered while writing this article appeared happy and unselfconscious.

On the Baltic coast one recent morning, I asked Tina Müller, a 39-year-old mother of two, why she felt the urge to get naked. She promptly returned the question: “Why do you feel the urge to wear a wet and clingy bathing suit?”

When you swim naked, she patiently explained: “It tingles on the skin. You feel every movement of the waves, every gust of wind directly on your skin. You feel your whole body. You feel alive, you feel free.”

Suddenly, I was the one who felt self-conscious.

Further down the beach, Gert Ramthun, an 80-year-old veteran nudist with snow-white hair and not a tan line in sight, says he started coming to Prerow, Germany’s most storied nudist beach, in the 1950s. The parties in those days (dress code: shell necklace only, please) were legendary, he says.

And those beach parties were one reason the Communist regime formally outlawed nudism for two years – before giving up and eventually even encouraging the practice as proof of how much more liberated life under Communism was compared to the prudish, capitalist West.

“It was a kind of ersatz freedom but it was still precious,” Ramthun says.

There is evidence group nudity has beneficial effects on body image and wellbeing. “Nudism makes us happier,” concludes Dr Keon West, a psychology professor at the University of London, who conducted a 2017 survey of 850 British people on the subject.

Outside of designated clothing-optional areas, public nudity is treated as a petty offence in Germany, punishable with fines up to €1,000. But legal precedent has de facto legalised nudity near a beach; and nudity in nature is tolerated as long as no one complains, which rarely happens.

Some worry that Germany’s nudist tradition is slowly going out of fashion, not least because of the widespread use of smartphone cameras and the popularity of photo-sharing sites like Instagram.

Formal membership numbers in nudist clubs have halved since the end of Communism to about 32,000, but Germany’s Association for Free Body Culture says the numbers are rising again – especially as young families rediscover nudism and the egalitarianism it offers.

“When you get to know people naked, all that status stuff ceases to matter,” says Adamski, the police officer. “You stop paying attention to how expensive their suit is or what brand their sneakers are.”

So much so that when Adamski ran into a fellow nudist in the city centre the other day he did not recognise him, because “he was wearing clothes”.