Want a laugh? Try explaining the furniture you grew up with to your kids 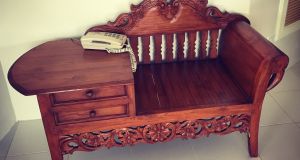 Looking at my 14-year-old on the phone – unselfconsciously stretched the full length of the couch – I envied his adolescent ease. So I told him how, at his age, when talking to pals, I had to leave the comfort of the sitting room and perch on the phone seat while trying to ignore the draught from under the front door.

He said “What’s a phone seat?”

I could picture many of those now useless pieces of household furniture that were once ubiquitous design features; every hallway had one. I described the one I grew up with. Built of light oak and tastefully upholstered in chintz it had the requisite shelf for notepad and phone, along with carved grooves for pens. It also had ample room beneath for the domestic and commercial telephone directories.

The boy had never seen an actual phone book, though he said he knew what they were having watched online videos of aspiring he-men trying to tear them pointlessly apart.

I was surprised to hear people still attempted that particular stunt – a perfect double metaphor for futility – wasting strength to no purpose on destroying something that’s lost its purpose. Are phone books even made any more? Perhaps one or two people still use them.

Just as there are always early adopters of new technology there must also be a few late discarders of older artefacts. Although I doubt anyone still has one of those massive squat tables designed to support massive, squat televisions.

I mentioned these to the younger boy and it briefly caught his curiosity. I started to explain, then saw the regret in his eye when I mentioned cathode ray oscilloscopes and gave up. We both knew any further discussion would be as profitable as explaining igloo construction to a camel.

Instead we turned on our current, slimline TV sitting on the unit I built to hold it and the now defunct Wii and DVDs. Behind these, my eye glanced fondly along the neat though equally obsolescent expanse of shelves I constructed for the CDs. But I’m reluctant to decommission them. After all, I made them and at least they don’t take up as much space as the “entertainment centres” I admired when younger.

The teenager on the couch has need of none of this. He loves his music but his phone does it all, and more.

That small piece of kit in his hand has also rendered another once common household item redundant: the family photo album. This is on balance an excellent thing. Sinister stacks of those forbidding volumes once lurked in every lounge: threatening to be exhibited at length to obligatory coos of admiration. Even ghastlier View-Masters were often produced – plastic, binocular-type yokes for viewing endless slides of interminable holidays – and circulated to each visitor, separately, who were thereby subjected to their own individual torture.

I know the current multitude of digital platforms spews forth a more overwhelming cascade of unwelcome images but at least social media can’t pinion you to the spot, face to face with your host as they nod and grin maliciously, daring you to drop the polite pretence of interest.

My sons will never know this torment. Nor will they ever grasp that making their own beds was ever an actual chore. They just thump a pillow and feck a duvet on a mattress. I gladly do the same. Yet there’s a loss: bed making, until recently an art form for all the people, has gone. Crisply folded sheets, tightly tucked blankets and reassuringly heavy bedspreads have disappeared into the past along with water beds – no great loss there.

Nor, I suspect, does anyone mourn the passing of those ridiculous vegetable choppers briefly in vogue last century – the things in a plastic casing with a zigzag blade attached to a spring fitted plunger which you pounded repeatedly until the lone onion or carrot (they were inefficiently small) was partly minced and totally battered.

Many similar culinary absurdities were obliterated by the all-conquering Magimix – though with collateral damage – other domestic familiars vanished too. As a boy I enjoyed using the rotary whisk to whip cream at high speed. And as a skint student creaming boiled parsnips for soup with a hand-turned vegetable Mouli felt very virtuous, until I was back in funds and I could buy burgers and beer again.

Modern technology and new modes of living have changed the everyday furniture of our lives. The demise of the dining room has made the sideboard, hostess trolley and serving hatch superfluous. The machine I write on has dispatched the typewriter.

I do have one stalwart, still present companion from the past: the stove. Unfortunately it’s time to light it again.

In Sight of Yellow Mountain by Philip Judge is published by Gill.