Focus ST reminds us why we love a fast Ford 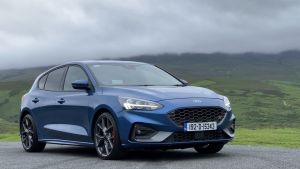 The Focus ST is an eighties heroes reborn

The idea of the fast Ford came to its apogee in the 1980s. It sure wasn’t born then - in fact by the beginning of the 1980s, the whole idea of a performance Ford was already a teenager. As we swept into the eighties - that decade of political turbulence, recession, depression, and the lingering tang in the air of imminent destruction - the whole concept moved into its true pomp.

At one point in the 1980s, you could have chosen from a panoply of fast Fords, from the Fiesta XR2 (which had not even 100hp); an Escort XR3i (not as good as a Golf GTI but still lots of fun); an Escort RS Turbo (like the XR3i but with enough power to utterly overwhelm its chassis); and the king of them all, the Sierra RS Cosworth. That original hot Sierra had barely 200hp in road-going trim, yet it built itself a reputation as a blue-collar bad boy, as apt to be driven by villains on the road as by heroes on the track.

All of that has rather fallen apart a bit since. The concept of the fast Ford has waxed and waned, to the point where now, we find ourselves with only three left standing. The Mustang, which is really too expensive to truly take on the working class hero mantle; the Fiesta ST which is deeply, deeply, excellent; and this, the Focus ST. Which is… what, exactly?

Well, in theory it’s a Golf GTI rival. After all, it’s similar in size and price, but that’s not quite a neat fit for the Ford. The most powerful version of the Golf GTI comes with 245hp, unless you’re prepared to pay a lot extra for a limited edition Clubsport model. The Focus has 280hp, which lifts it almost into contention with the mighty Golf R. It’s not quite right to pitch the Focus against the R, though, nor the likes of the Renault Megane RS nor Honda Civic Type-R. Those latter two feel more like specially-engineered race-track refugees, whereas the Focus ST feels more… normal.

So, it sits in something of a middle ground, but the question must be – an uncomfortable one? Or a sweet spot?

It doesn’t look like much, to be fair. Previous ST models have verged on the truly aggressive with their visual style, but this version, especially in the slightly dour “Ford Performance Blue” metallic paint finish of our test car. There is the de rigeur muscular bodykit, and rather nice dark-finish alloy wheels, but the existence of the sporty-looking ST-Line pack, which is available on normal, common-or-garden Focuses, rather blunts the styling edge. It’s handsome nonetheless, but you just might lose sight of it in a busy car park.

Inside, in some ways, the situation is even worse. There is but a set of deeply-bolstered Recaro bucket seats with which to distinguish the ST from its lesser brethren. They are in themselves a mixed blessing - tightly supportive, yes, but a little too snug across the shoulders and buttocks for those of us with biscuit dependencies. The rest of the interior is just rather too low-rent, at least in appearance. There is far too much scratchy black plastic on show for a car which must compete with VW’s finest.

The Focus ST, by contrast, feels just the right side of ragged

At this point, just as things look their bleakest for the ST, like all true-blue heroes, it starts to hit back. And that right hard. The scratchy plastic is there, but the underlying quality of the cabin is rock-solid. There’s also masses of space, including ample legroom and headroom in the rear, which reverses a major bugbear of the old Focus ST.

The punches come harder and faster when you turn to the engine. The 2.3-litre EcoBoost four-cylinder unit is basically that which you’ll find under the bonnet of the basic Mustang, but turned sideways to drive the front wheels. It pumps its 280hp and 420Nm of torque through an electronic differential which helps those wheels find traction and grip when cornering hard. You can have an optional seven-speed automatic transmission, but why would you want to? The six-speed manual has a sweetly hefty action, clunking into the next gear with well-oiled precision. It also sounds good, more like a warbling five-cylinder than the usual bland four-pot grumble.

The ST uses, basically, the same suspension as that of normal Focuses, but 10mm lower to the ground, and some 20 per cent stiffer up front. With no increase in track, and no bespoke components, you’d expect it to be a bit limited in its dynamic repertoire. Not so – for a start, the ST gets adaptive suspension dampers which adjust themselves every two milliseconds, to match the stiffness to the surface. They work incredibly well, for while the Focus ST is never less than firmly sprung, the damping is so good that you almost never feel jostled nor jarred.

The steering is a little rubbery in its feel, but it is unerringly precise in its action, and actually pretty good at telling you what the front wheels are up to. That’s helped by the fact that the ST uses the expensive multi-link rear suspension that’s denied to basic Focuses, and which does much to help the dynamic performance here. Find the right road and the Focus ST can string together a symphony of apices, a concerto of corners. It’s massive fun.

That makes it something of an outlier. There are too many fast cars these days that feel like (and effectively are) computers accepting inputs. The Focus ST, by contrast, feels just the right side of ragged – the front wheels break traction easily, there’s a light touch of torque-steer at times – which makes you feel part of the performance, rather than the observer position to which others relegate you. It’s not even that thirsty, easily averaging 30mpg even under repeated provocation.

Cheap? No, it’s €41,900. Other flaws? The brakes could do with more bite, and the touchscreen is nothing special.

What the Focus ST is, though, is those eighties heroes, reborn. At a time when recession once again stalks the land, when we’re worried about annihilation (via virus, rather than nuclear war this time), and when divisive political figures dominate (Johnson for Thatcher, Trump for Reagan, Putin for Andropov), the Focus ST provides some welcome distraction from the awfulness of it all. Fun’s in short supply these days, so thankfully there’s a fast Ford which can supply it in bulk.