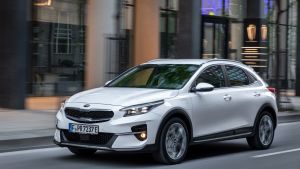 Kia Xceed: The €29,000 price point puts it right in the mix against regular hybrid rivals

While most of Ireland’s two million motorists still power their cars at the filling station pump, in years to come when they get their hands on a used 202 reg car, many would like to be at least partly powered through a plug.

The wave of new plug-in hybrid models landing in Ireland would make you think we’re already done with diesel. Yet the dinosaur juice still accounts for 44 per cent of new car sales. Electric cars make up 3.6 per cent, while plug-in hybrids make up just over 2 per cent.

It’s worth remembering this when you hear the constant charge of motoring ads about clean, green, electric cars. The Government may be dedicated to a 2030 ban and car companies want to showcase their environmental awareness, but Irish people are buying diesels.

So does that make all this talk of plug-in power irrelevant to the rest of the 2 million Irish motorists who rarely buy new? Not at all, because the new cars coming on our roads right now are the used car fleet the rest of the market will be buying in the years to come.

At some stage these fossil-fuel loyalists will transition to the plug and for many the best stepping stone may be a plug-in hybrid. Range anxiety was all the rage in the electric car debate in recent years, but now the biggest hurdle seems to be the public charging network and the list prices. Fully electric cars aren’t cheap. And for most car companies, they’re not profitable either. So just as motorists aren’t eager to see their current car sent to the scrapyard with little or no return on its price, the same view is held by those that make them. Even the car companies are eager for evolution rather than revolution. It’s the only way most of them will survive.

Kia has lived in the shadow of its Korean sibling, Hyundai, for decades, in Ireland at least. Yet the self-styled ‘sportier’ brand should never be regarded as the also-ran. The reality is the brand may not match Hyundai for its fleet of vehicles on Irish roads, but it does beat its sibling when it comes to styling.

Kia shares the same underpinnings and the massive resources of the Hyundai conglomerate, but thanks to a decision many years ago to focus as much on form as function, the end result is a fleet of gorgeous looking cars.

Much of the credit lies with its design centres in the US and Germany, which have persuaded the bosses to adopt more muscular and eye-catching looks that fit the tastes of European and American buyers. Contrast with the blander, more conservative styling of Hyundai and you see where the two brands more clearly diverge.

This Xceed is a case in point. When developing its hatchback range, Kia knew it needed a crossover in the mix. That challenge was picked up by its Frankfurt-based design team. And they’ve delivered a star. During a week with the car, several strangers approached to comment admiringly on its looks. Two thought initially it was a new Volvo model; the XC in the name distracting them from the fact it says Kia quite clearly on the car.

So back to the plug-in part of the story. The test car was powered by Kia’s four-cylinder 1.6-litre petrol engine combined with a 8.9kWh lithium battery pack powering a 44.5kW electric motor. In electric car terms, that’s a pretty small battery pack. To put it in perspective, the all-electric Kia Niro has a 64kWh battery pack.

Yet it’s big enough for Kia to boast an all-electric driving range of over 50km. During my time in the car I only managed 37km, but that’s still impressive and enough for many families to find themselves only driving in electric power during the week, provided they plug the Xceed in occasionally. Certainly for the initial four days of my test – even with a couple of cross-city runs around the M50, the petrol engine was an idle passenger.

And of course, that’s the big criticism of plug-in hybrids: you are always burdened with unused engineering. It’s like hauling a holiday suitcase with you every time you leave the house, just on the off-chance you may need to be away for longer than you think.

Carrying a spare engine around is not to be sniffed at in terms of extra weight, and ultimately wasted energy. Similarly when you are running on petrol, that battery pack is an added load.

Yet until we get electric cars that can combine acceptable long-range travel with affordable price tags, or a national recharging network electric car owners know they can rely on, then plug-in hybrids offer the best stepping stone to our electric future. Not just now, but in the future for the million or more used car buyers who will be making that same transition in four or five years time. And that means, provided reliability holds up, the Xceed should hold its value relatively well.

As I’ve said, I love the styling. It’s sleek, elegant and, I suspect, will age well. The two areas that let it down are the rather boring interior and the times when the engine does take over.

We’ve noted a common gripe from the growing pool of plug-in hybrid drivers: they get so used to running on electric-only power on their daily short commutes that when the engine kicks starts up it sounds gruff and noisy. That’s a fact of life when moving from the silent whoosh of electric to the piston-pushing power of fossil fuel. But the Xceed’s 1.6-litre block is a little gruff even by hybrid standards, and I expected the six-speed dual-clutch auto transmission to be a lot smarter and slicker with its gear changes.

But it’s by no means a deal breaker. The car’s handling is on a par with the rest of the Ceed range, the steering a little too rubbery, with a fair degree of bodyroll in the bends. It’s certainly not sporty, but then with a 0-100km/h time of 11 seconds it was never going to be; this is a car sold for sleek styling and environmental kudos. It delivers with aplomb on both fronts.

At present it benefits from a €2,500 reduction in Vehicle Registration Tax (VRT) and a further €5,000 grant from Sustainable Energy Ireland. You also qualify for the home charger grant, which largely covers the cost of installation of the wall box at your home, if that is you have somewhere to put it. As for Kia, they add on their seven-year warranty.

The €29,000 price point puts it right in the mix against regular hybrid rivals, coming in at a lower price point than the Hyundai Kona hybrid or Toyota’s CH-R. With the plug-in option and the chance to run it completely on electric for a realistic 30km or so, that makes it a very tempting proposition. Combine this with the stylish exterior looks and the Xceed starts to nose out in front. The cabin lacks the premium feel of the CH-R, but the Xceed is still generously equipped with 18-inch alloys, dual zone auto aircon, 8-inch Android Auto/Apple Car Play touchscreen, rear privacy glass, rain sensors , lane keep assist, and forward collision avoidance .

This is the first plug-in hybrid in the Ceed range, but it will feature in the hatchback and sleek Proceed in the near future. Kia has some great looking cars in its mix these days and the Xceed is a great addition to this portfolio. Adding a plug to the mix only makes its sales pitch stronger.