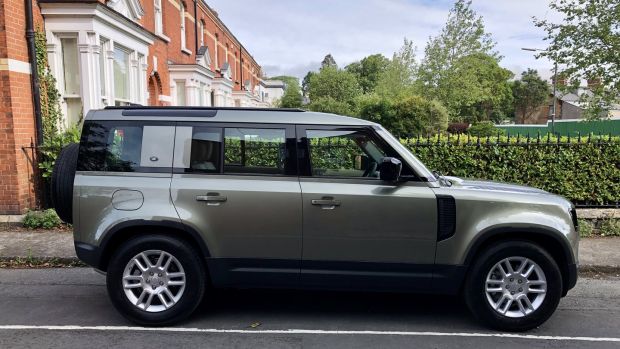 First encounters with the new Land Rover Defender is like meeting a hard-working farming neighbour after they’ve won the Lotto.

You know the well-rooted family tree, the hard toil and honest, earnest efforts of the past. Sometimes superhuman in their efforts to get the job done, always there for you in a crisis. Yet here they are in their Sunday splendour and after a shopping spree at the Apple store. While everyone nods admiringly and wishes them well, in barstool conversations about how the money has changed them: can you really give them a call on a stormy night to help find an errant ewe?

This Defender is the greatest example yet of the gentrification of a working vehicle since they started fitting air-con into tractors. After this, if Caterpillar start offering bulldozers with baby-seats, we won’t blink an eye.

It’s a bit of a design masterstroke. The overall effect is similar to the way BMW revived the Mini, and not the way VW rehashed the Beetle

There is no need to plough through the history and heritage of the Defender again; you’d need to have been in lockdown all your life not to have come across some version of the original, bouncing along our roads and fields. It was rudimentary and rough, inside and out. More recently it became retro chic.

It also hung around in its previous guise for a lifetime as Land Rover engineers and designers struggled to come up with a significantly modern take that didn’t seem like some motoring pastiche of what was already on sale.

After a great deal of procrastination here it is. And it’s a bit of a design masterstroke. An extremely unscientific straw poll of Defender fans elicits a lot of positive responses to its look. It has been modernised, but without losing its identity. Steel wheels are a nice touch and a must for any buyer. The overall effect is similar to the way BMW revived the Mini, and not the way VW rehashed the Beetle.

Inside is the biggest change, with soft, comfortable seating and a mix of hardwearing plastics with more modern soft-plastic touches you’d find in any premium saloon. Some of attempts to play up the rough and tumble workhorse reputation inside don’t really work, such as the rivets on the door panels. They are incongruous to the digital displays and comfort features inside. Those digital features are focussed on a new standard 10-inch touchscreen in the centre of the dash. It’s smart, intuitive and stylish, but you can’t help wondering how it will survive amid the rain-soaked fingerprints and muddy paws that you normally associate with a Defender dashboard. At the grand unveiling of this car last September, its engineers were adamant this interior can survive the rough and tumble. I’m intrigued to see a used one five years time after life on a proper working farm.

On the road, the new Defender is also a revelation. Now it is advisable to stand at least 2 metres away from an ardent Defender fan when you criticise the outgoing car (or at least out of the arc of a swung punch). But there is no getting away from the fact the old version was a dog to drive.

This new version is no sports car, but in contrast to what went before it’s a marvel. Previously, when trying to overtake in a Defender, you needed to stand up on the accelerator and shift your weight to the front of the seat like an eager jockey urging on his stead. With a solid effort on the driver’s part and a good wind on your back, you could hit motorway speeds. Cornering was akin to riding a Penny Farthing. And the radio was there for show: most of the time you couldn’t hear it over the engine.

It has permanent 4WD, of course, with a central and rear diff lock, and a solid shield across the bottom of the car that’s helpful for aerodynamics but also for being able to slide over sand dunes and snow drifts without getting stuck

In contrast, this Defender has smooth purring acceleration from its 2-litre diesel engine, putting out 237bhp in our test car. A 200bhp version is the entry-level offer. It is mated to a wonderfully smooth automatic transmission that delivers power without any fuss. For what is supposed to be a diesel workhorse, the new Defender’s air suspension set-up is remarkably refined.

There’s still a fair degree of bodyroll in the bends, and while the steering is relatively precise and nicely weighted, like most large SUVs it can be a little anaesthetised. But that’s the trade-off you get for remarkable off-road capabilities.

While we never got to put them to a proper test this time, the off-road credentials are impressive. The roof can take 300kgs when the car is static - when the car is static - meaning three adults can pitch tent up there at night - and up to 168kgs when on the move. It can wade in water up to 900mm deep, and more if you don’t mind taking some water in the cabin as a bit of ballast to stop you from floating away. It can tow the maximum legal limit in every country it’s sold, which means 3.5 tonnes in Europe. It can climb a rock face of up to a 45 degree angle, with ground clearance of 290mm. It has permanent four-wheel drive of course, with a central and rear diff lock, and a solid shield across the bottom of the car that’s helpful for aerodynamics but also for being able to slide over the sand dunes and snow drifts without getting stuck.

Speaking to The Irish Times at the launch, Nick Collins, the Defender’s vehicle line director explained that “an example of one of our toughest sign-off tests was to get the Defender to overcome hitting a 200mm high square-edged kerb at 40km/h. Now if you happen to be unlucky enough to be the test driver of that car, that’s quite an extreme input. That specific test will generate 7 tonnes of load through the suspension, through the links and into the body structure.” And the new Defender can cope. This is heavy duty off-roading.

Yet clearly the ambition is to lure more urban motorists to its model range. For those coming from a premium saloon, the move will be pretty seamless once they get used to the scale and height. For anyone coming from the previous generation Defender it will be like landing on another planet.

Like the original, the Defender comes in two flavours: a short-wheelbase 90 and a longer 110. Commercial versions are on the way, as is a mild hybrid to give some semblance of a green hue to the car.

Our test vehicle came with the 5+2 seat format, with two jump seats offering an optional third row for €2,000, though if you really need an extra set of seats then you will probably need to look at its Land Rover sibling, the Discovery, instead. Luggage space is as mammoth as you’d expect - over 1,000 litres in the 110 version - and hard-top commercials are on the way, which means we should see a few 90 and 100 versions on construction sites in the near future. In the trade-off for tech, Land Rover retained this car’s practicality.

The Defender is built for rough rides, but I’m sure the company was planning for a smoother first drive than it has had to date. Landing in showrooms during a global coronavirus crisis is tough terrain. Recent reports suggest that initial sales have been underwhelming, but that’s hardly surprising given the global economic backdrop.

Land Rover is clearly taking a gamble that the Defender brand has enough history and cachet to lure more well-heeled buyers to purchase the car, to make up for those it may lose at the more price-conscious end of the market

It’s likely the Defender’s move upmarket may leave a few ardent fans in the layby looking for another ride.

As for the more well-heeled rural motorist with land to tend but a budget for Defender, the issue then arises that Land Rover has several models all vying in the same sort of space. The family-friendly Discovery starts at €68,630, the gorgeous Range Rover Velar at €60,835.

Land Rover is clearly taking a gamble that the Defender brand has enough history and cachet to lure more well-heeled buyers to purchase the car, to make up for those it may lose at the more price-conscious end of the market. And recent motoring history shows that the strategy can pay off. Look at Mini, originally a bargain value-based little car, now modernised and revamped for the premium market. The leap here is greater, but the strategy is just the same.

Simply rehashing the old Defender was never really an option any more, and the clock was clearly ticking in terms of it passing more stringent environmental and safety regulations. The new car on the new platform means the Defender nameplate lives on, without losing too much of its character. Price is undoubtedly the biggest stumbling block to the Defender’s success and it may well trip it up. But this is the best take on the Mini revival playbook to date, done with a workhorse SUV that has long lived off its hype rather than any pleasure with living with one.

And the sales stats seem to back up the strategy. This once bucolic brand is hellbent on securing the suburban streets. In 2007 42 per cent of new Land Rovers vehicles were registered in Dublin. Last year it was 63 per cent. In 2007, of the 80 Defenders sold that year just 15 were Dublin-reg, whereas Meath was the biggest market. So far this year, of the 14 new Defenders already registered, 10 have Dublin-reg.

The motor industry has witnessed numerous marketing attempts like this, but for once this is a car that lives up to the hype.

‘I expected everyone in Ireland to be drunk and Dublin to be dangerous, but I’m a big fan now’

My life is out of synch without my best friend

As seen on TV: Dublin Georgian used in Rebellion series on market for €575,000

Róisín Ingle: Another lockdown – it won’t come to that. Will it?

‘I got an offer I couldn’t refuse’: Helen Turkington shuts up her Ranelagh shop