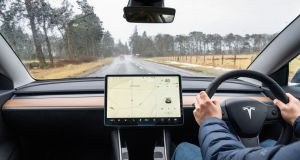 Tesla has often touted its over-the-air software updates as a major benefit of owning one of its electric cars.

It used to be that you bought a car, paid for it, owned it, and then eventually sold it again, reaping the balance of its value as cash. That changed with the advent of ‘bubble payment’ finance, and changed again with personal contract plans (PCPs) – in which effectively you pay to rent a car, financing the cost of its depreciation more than actually buying the metal.

Some car makers, notably Volvo, have also advanced a little down the road of car subscriptions in some markets, where one monthly payment would cover the use (as opposed to thee ownership) of a car, complete with tax, insurance and servicing costs.

We have now reached the shores of a new Rubicon. Paying. For. Everything. Over. And. Over.

According to BMW: “BMW drivers can keep their vehicle up to date with the latest software, just like with a smartphone. The new functions can be downloaded and installed over the air. This is particularly convenient and extremely fast: even for extensive upgrades, hardly more than 20 minutes of pure installation time is required. With remote software upgrade, BMW also offers its customers maximum flexibility and security when booking optional extras at a later date – regardless of whether the vehicle is new or used.”

Basically, BMW has worked out that because it’s simpler, from a production point of view, to install the hardware for high-ticket items such as high beam assistant, active cruise control, BMW driver recorder, BMW IconicSounds Sport, and even the adaptive M suspension whether these have been specifically ordered for that car or not. They can then be switched on remotely, when and if the car’s owner, or some future owner, decides that they want to pony up the extra cash.

Now, with a charitable frame of mind, you could call that improving consumer choice, as well as simplifying production systems and making them more efficient. There is a more sinister side, though.

Tesla has often touted its over-the-air software updates as a major benefit of owning one of its electric cars. Most of the time, these will be small, barely noticed updates (again, much as with your laptop or your phone) but sometimes fundamental changes can be made, such as unlocking more performance from the electric motors, or adding functionality to a major system such as the automated driving aids, or even extending the one-charge range a little by reconfiguring the car’s systems to be more efficient.

Earlier this year it became clear that just as Musk giveth, so Musk can taketh away. According to US motoring website Jalopnik, Tesla had been remotely switching off some functions on cars that have moved on to their second or even third owners, on the flimsy premise that the new owner hadn’t paid for them.

Jalopnik quoted the case of a buyer identified only as Alec who bought a second-hand Model S from a car dealer, who in turn had bought the car as stock from an auction. The car originally had ‘full self-driving’ (Tesla’s somewhat erroneous name for its automated lane-keeping and cruise control system) fitted as an option, paid for by the original owner. However, when Alec brought his Model S back for a service, the FSD option was mysteriously deactivated. Tesla responded to his queries with a statement that said: “We looked back at your purchase history and unfortunately full-self driving was not a feature that you had paid for. We apologize [sic] for the confusion. If you are still interested in having those additional features we can begin the process to purchase the upgrade.”

Now, that’s not only odd – after all, if the original owner had paid for the option, then surely it simply remains with the car, just like any other option such as leather seats or a better stereo – that’s apparently out of line with Tesla’s official policy, which says that features are connected to the car’s vehicle identification number (VIN) and are, theoretically anyway, part of the car for life. Similar issues were found with a Model X.

A spokesperson for Tesla in Ireland said that while they could not comment specifically on the cases in the US, there was no policy of removing items from a Tesla model before it was sold on. The spokesperson said that in some cases there may have been administration issues, but that any customer who had concerns should check the original invoice for the car (stored in the vehicle’s online Tesla account) and any missing software would be restored. The spokesperson said that the only reason any second-hand model might have software removed in the Irish market would be if the car was taken as a trade-in at the Tesla store, and the decision was taken to remove some items in order to sell the car on at a discounted price. All of which is fair enough, on the face of it.

However, it’s also possibly a worrying glimpse into the future, one where car makers turn increasingly towards selling us digital ones and zeroes, instead of selling us metal and rubber. According to PricewaterhouseCoopers (PwC), the number of cars in use in Europe is expected to hit a peak of about 270 million by 2025 and then steadily decline thereafter. Given that decline, car makers are keen to sniff out opportunities to sell us digital services, which is why we hear so many car companies now refer to themselves as ‘mobility providers’. There should be no surprise in this – PwC also estimates that by 2030 the market for connected car services will be worth a massive $81 billion (€72 billion).

BMW’s new software is, clearly, a move in the direction of subscriptions for options, with even the potential for ‘bricking’ a car when it has been traded in, meaning that a second-hand buyer will have to pay all over again for options originally fitted.

A spokeswoman for BMW Ireland told The Irish Times that, right now, that’s not the intention. “BMW is in the midst of a big remote software update campaign for all our vehicles with operating system 7. High beam assistant and IconicSounds Sport in the BMW ConnectedDrive store are available to purchase by the customer directly for eligible models where the hardware supports. Both features are offered via a one-off payment (high beam assistant €180 and IconicSounds Sport €150), rather than a subscription model which may be offered in other countries. They are available through the Ireland ConnectedDrive store as a one off, if the model supports the functionality.

“An example use case is where vehicle ownership moves to the second owner, they may decide to enable one of these features where it was not selected during the initial ordering process.”

It could be a move towards a mobile-phone model – one where you essentially buy a blank-slate car and then populate with with the functions and equipment that you can afford, without the need to spend on items that you simply don’t want.

Consumer advocates suspect that this might be the thin end of a large and lucrative wedge, however. “It is a feature of added cost centres for the manufacturers focused on the more expensive models – for now. Arguably therefore it shows how, regardless of the enormous outlay at the showroom, the add-ons keep coming in a similar fashion and revenue-earning approach to that of in-app purchases,” said Dermott Jewell, policy advisor for the Consumers’ Association of Ireland.

He added: “The concern is how far the industry will take this and if they will in time bring it into the standard models and across all ranges and all makers in what is a volatile and highly competitive market. It is more than likely that it is certainly high on the designers’ and manufacturers’ agenda.”

The BEUC, the European Commission’s consumer advocate organisation, although not commenting specifically on BMW’s plans, also expressed general concerns about the future of subscriptions for equipment. A spokesperson for the BEUC said: “It seems the hardware will have to be built into the car anyway, irrespective of whether you or I opt for the features, or not. So what happens when the initial price drops and we would en masse decide not to subscribe? Might we be nudged/incentivised into taking the subscriptions? And, if so, how? What about software updates? Is there a chance we would have to start paying for updates on security and safety features features, eg cruise control?

“Then there is the topic of continued software updates. We wouldn’t want our older cars to stop receiving updates should a new model end up on the market. Especially in an era where there’s lots of talk about sustainability and product longevity. What about third party access? Will independent, third-party service providers be able to access the hardware, for repairs or other aftermarket services?”

The problem is that car makers, looking at an approaching tsunami of technology that will require enormous investments to bring to market – electric and hydrogen power, ever-expanding connectivity, autonomous and assisted driving – are scrambling to find more ways to earn money. While it might be a while coming yet, don’t be surprised to one day see a message ping to life on your dashboard asking you to swipe or tap your credit card to switch on your anti-lock brakes and airbags.