VW Scandal: is it the end of the road for diesel?

Volkswagen has admitted up to 11 million of its vehicles worldwide have been fitted with software to deceive US emissions tests. Assistant business editor Michael McAleer explains what happened and what it means for motorists and manufacturers. Video footage: Getty Images 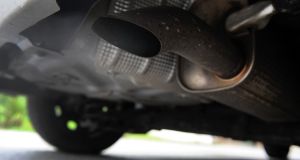 Analysts and green groups have been warning for years that actual vehicle emissions were likely much higher than reported ones - creating a false sense of confidence in the quality of the air we breathe, and preventing adequate measures from being taken. Photograph: Getty Images

VW’s cheating on diesel emissions tests has shaken the motor industry to its core. This is arguably its Lance Armstrong moment. The scales have fallen from the eyes of consumers as they realise these testing procedures may be as open to abuse as the ones in sport.

The ramifications are widespread but one consequence is likely to be a review of our recent love affair with diesel technology.

It has been a whirlwind romance when put in the context of the history of the automobile. While diesel was the favoured fuel for heavy vehicles, for passenger cars it was still “dirty diesel”, spewing out soot-laden fumes. Then we started to focus on global warming and in the midst of the debate legislators noted the lower carbon dioxide (CO2) emissions from diesel engines.

Following the signing of the Kyoto protocol climate change agreement in 1997, most wealthy western countries were legally obliged to reduce CO2 emissions by an average of 8 per cent over 15 years. Given the sizeable role of the car in the climate debate, it was a particular focus of attention.

In the US and Asia, the focus turned to petorl-electric hybrid engines, reducing the use of the petrol engines with the help of electric energy.

In Europe, however, where diesel development was always much stronger, it was noted that diesel could offer a quick fix and far less costly than the hybrid systems, which were still largely in their infancy. Diesel engines produce 15 per cent less CO2 than petrol powertrains.

From a situation where less than 10 per cent of the European car fleet was diesel, the so-called “oil burner” became the fuel of choice. Tax policies supported the move to diesel, and there was certainly a heavy lobbying campaign from the European car firms for support for diesel ahead of a move to hybrid, where US and Asian rivals seemed to have the advantage.

As a result of this - and in fairness an honest belief that reducing CO2 was the priority to save the planet - diesel prices were kept low and tax regimes were introduced that clearly benefitted motorists if they opted for diesel instead of petrol.

What was largely ignored in the debate was that diesels emit the Nitrogen Oxide (NOx) and other tiny particles that penetrate the lungs, brain and heart.

The hope was that as diesel became more important and the focus of engineering efforts, the harmful air polluting emissions could be reduced.

These came in the form of EU emissions regulations, which have been enforced in ascending levels of strictness since the first set of rules, Euro1, was introduced in 1992. NOx emissions weren’t specified until the arrival of Euro3 in January 2000, when they were set at 0.25g/km. In January 2005, under Euro4, that was tightened to 0.25g/km .

Then we come to the rules that will define whether or not Volkswagen was breaking EU directives as well as American ones - Euro5a and Euro5b. Introduced, respectively, in September 2009 and September 2011, both tests pegged NOx emissions to 0.180g/km. The current Euro6 regulations, introduced in September 2014, have tightened that up ever further to 0.080g/km.

Now, according to the US regulator, the Environmental Protection Agency (EPA), VW’s cars were emitting up to 40 times to levels of NOx allowed when the secret software wasn’t running. At that rate, a car supposedly conforming to Euro5 emissions regs wouldn’t even pass Euro3.

That makes a mockery of the testing regime in the US, and certainly calls into question whether similar cheating has been underway this side of the Atlantic.

According to the Guardian and BBC’s Newsnight, Volkswagen’s rigging of emissions tests for 11m cars means they may be responsible for nearly 1 million tonnes of NOx air pollution every year. To put that in context, western Europe’s biggest power station, Drax in Britain, emits 39,000 tonnes of NOx each year. In its report the Guardian quotes Prof Martin Williams of King’s College London as estimating that in Britain emissions from diesel cars cause roughly 5,800 premature deaths each year. “If you were to make the cars emit at the legal limit you could reduce those deaths by at least a factor of two and maybe more. Maybe a factor of five.”

The US finding is certainly going to hinder any attempt to grow the diesel share of the market there, where it stands at just 3 per cent of passenger cars at present.

In Ireland our love of the diesel came about with the advent of our CO2-based tax regime. In 2007 71 per cent of new car sale had petrol engines. Emissions-based tax was introduced in July 2008. Last year 73.5 per cent of sales were diesel. Irish consumers really engaged in the environmental debate if it impacts on their pockets.

In the short-term the focus will be on whether car firms have been cheating on tests in Europe and other jurisdictions, and whether this cheating was only related to lowering NOx emissions.

It may force legislators to introduce real-life measurements into the tests and take the cars out of the lab conditions.

That will certainly lead to new higher readings for most cars, not just VW Group models. It may mean the next generation of new cars will fall into higher tax brackets under emissions-based systems. Revenue officials won’t complain about the extra tax take.

In the longer-term, however, the attention paid to the air pollutants associated with diesel could well spell the end of the road for diesel’s burgeoning share of the passenger car market.

Already various urban councils across Europe are putting air quality as a priority and putting together plans to limit diesel cars from certain parts of towns and cities. And whatever about the social concerns motorists may have about air quality, any restrictions on the use of diesel powered cars will serve to promote sales of petrol or hybrid models.

Diesel may have had its heyday and hybrid alternatives may now garner the momentum that many were hoping would push them onto car-buyers shopping lists. For European car firms like VW, it will mean a serious about-face in engineering priorities. That could prove costly and give US and Asian rivals an upper hand.

The motoring landscape, from the petrol pumps to the boardrooms, looks set to be transformed on the back of this scandal.

Supergarden sweeps to the sea in Balbriggan for €745k
3

‘Once you are not lily-white or freckle-skinned, you are labelled as non-Irish’
4