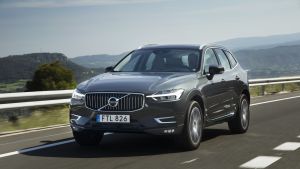 The new Volvo XC60 is the company’s most important new car to date.

On first impressions, the new Volvo XC60 is merely a scaled-down version of the firm’s flagship XC90 SUV. Yet this suburban crossover represents so much more.

For starters, it is Volvo’s most important new car to date, right at the heart of the most competitive market segment. If it does succeed, it’s easy to see this being the carmaker’s best-selling model. Currently, the XC60 represents a third of Volvo sales globally.

It also represents the latest evolution of the Swedish car firm’s incredible recovery from the brink of extinction. There was a time in the financial crisis when it could well have followed its fellow Swede Saab into motoring oblivion. Bold decisions – and a wealthy Chinese backer – saved the day and set in train a new strategy that has led to a remarkable revival in fortunes.

Despite its relative size, the firm has made some big promises, not least to have fully electric versions of its cars on market by 2019 and autonomous cars on sale by 2021. In line with that is its bold safety vision: from 2020 no one should be killed or seriously injured in a new Volvo car. With revolution in the air, Volvo now finds itself on the front line of the charge.

Back to the present and the new XC60 looks every inch the shrunken XC90, yet in that regard it will also appeal to potential buyers who perceive the flagship Volvo as too big and unwieldy.

There are some unique styling differences, particularly in the rear, yet they are going to be the preserve of Volvo aficionados.

Inside, the similarities with the bigger SUV brother continues. The dash boasts stylish wood features that evoke a trendy Scandinavian design theme. They marry well with touchscreen controls courtesy of the same centre console screen that is in the XC90. The 9.3in touchscreen runs on the same Sensus Connect System, although it has been updated with different fonts and some new features. Volvo says that current XC90 owners will get the software upgrades when they go for their next service.

The XC60 is also built upon the same underpinnings as the XC90 and S90/V90, known internally as the SPA platform.

The car also features the same range of four-cylinder engines. Initial options in Ireland are the 190bhp D4 or 235bhp D5 diesels, or the T8 plug-in hybrid version with 320bhp petrol engine combined with an 87bhp electric motor. This hybrid has been a surprise hit, representing 15 per cent of sales of the firm’s big SUV.

Within months of launch expect a smaller 150bhp D3 diesel and a T4 197bhp petrol added to the line-up. Initial cars will be all-wheel-drive, but a front-wheel drive is also on the way. The smaller engines feature a choice of automatic or manual transmission.

Better on the road

For all its shared Volvo family traits, the most evident improvement is the XC60’s driving dynamics. While it still can’t be classified as sharp or sporty, the new crossover is much more agile than either the larger XC90 or the S90 saloon. For all the tech wonders, with both models there is simply too much body roll in corners, while the steering always seems light and imprecise.

With the XC60 these issues seem to have been allayed. The car is much more stable through bends, while the steering feel is noticeably sharper.

We got to test the new D5, which also features the firm’s innovative PowerPulse technology. Other car firms have tried to tinker with turbo lag using electric boosters, but this compressed air system proves that the simple option is often the best.

The end result packs noticeably more punch – an additional 45bhp on tap and 1.2 seconds quicker 0-100km/h than the D4 – but I’m not convinced it is enough to lure Irish buyers to spend the extra €6,000 over the D4 diesel version.

For example, a portion of that money could secure a range of features such as the firm’s Pilot Assist system. Heralding the onset of driverless technology – and included in a pack which also adds adaptive cruise control, blind-spot alert and rear-collision mitigation for under €2,000 – it is arguably the big tech talking point for buyers.

Autonomous in all but name

Essentially Pilot Assist takes control of steering, acceleration and braking in certain circumstances. Using cameras to gauge road position, read road signs and markings, along with radar and lidar tech to monitor other road users, the car can take control, but requires the driver to keep hold of the wheel. It means the XC60 becomes self-driving in all but name. However, as the technology is still very early stage – and hands back control to the driver without warning – Volvo is loathe to refer to it as such.

The XC60 features the latest version of Pilot Assist and it is noticeably improved even from the one that features on the recently launched S90/V90 range. For example, on motorways it is much less erratic in maintaining lane position, veering far less within its lane than the earlier version. More fun than function at present, it is far from perfect, but a fascinating preview of what is to come.

The XC60 also features new assistance systems designed to keep drivers out of trouble. Top of the list is a new addition to the car’s City Safety system. The current system applies the brakes when it deems a collision is imminent, but now it includes steering assistance. Operating between 50-100km/h, Volvo engineers say it achieves the sort of manoeuvre only professional drivers could usually achieve.

Pricing is in line with rivals such as the Audi Q5 and BMW X3, although significantly up from the heavily discounted rollout prices for the current XC60 range. Starting at €53,950 for the D4 AWD, it rises to €59,950 for the D5 PowerPulse, while the T8 plug-in hybrid costs private buyers €66,340 after the various grants. Entry prices for the XC60 will be lower when the D3 and front-wheel drive versions arrive.

For decades the firm that brought us the modern three-point seatbelt has played the safety card. In response, the market has considered Volvo the sensible choice, if a little staid.

The advent of driverless cars and consumer fears mean this safety focus is going to chime much more with car buyers. In an interview with The Irish Times earlier this year, chief executive Hakan Samuelsson said: “When it comes to autonomous cars, people will think twice before they really sit back and relax and watch a movie. You can just imagine if you are driven by somebody you don’t know very well, you tend to brake when you are on the other side of the car. So I think such a system has to be very reliable and credible and that’s probably one of the best assets we have as a company. We have a strong reputation for safety.”

In the shorter term, Volvo’s model assault will continue apace. Next up is a smaller SUV, the XC40, arriving in Ireland at the end of the year, aimed at the likes of the Audi Q2 and BMW X1. A smaller mid-sized saloon is also in the pipeline.

Judged against rivals such as Audi, BMW and Mercedes, the Chinese-owned car firm is a motoring minnow. Yet whether through serendipity or shrewd planning the sensible Swede is finding its safety-conscious message is perfectly pitched with the revolution ahead. The new XC60 marks another chapter in this story.

Verdict: All the bells and whistles of the larger XC90 but with better handling. A match for German rivals.

Michael Harding: ‘I could hear my boots under the bed, crying all night’
7

Shame-free sex education: It’s So Amazing! And only a little bit mortifying
9