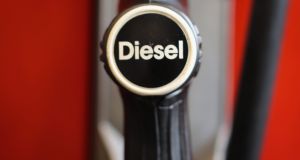 Toyota predicts a slump in new diesel car sales, which fits with its decision to no longer develop new diesel models

Diesel divestment is growing apace this week, as Toyota has predicted that the market share for oil burners will fall to 55 per cent next year. The Japanese manufacturer has also given a global commitment that it will no longer develop new diesel models, and will instead replace existing DERV powerplants with hybrids as models are replaced.

Toyota Ireland reckons that diesel sales in Ireland are in something akin to freefall, certainly amongst its customers. So far this year, hybrid sales within the brand have grown to 30 per cent of all Toyota’s Irish sales, and are expected to hit 45 per cent next year. Of course, some of that is down to models such as the C-HR crossover and the new Yaris not being offered with a diesel powertrain in the first place, but others, such as the Auris, Corolla, Avensis, and RAV4, can still be had with a diesel.

The resale values of diesel cars are also starting to soften. Toyota has launched its own captive bank in Ireland for the first time, Toyota Financial Services, and it has predicted that the resale values of hybrid vehicles will be some six per cent higher than an equivalent diesel. While there’s a certain amount of ‘they would say that’ there does seem to be some financial reality underpinning the claims.

Michael Gaynor, marketing director at Toyota Ireland said: “as Irish motorists begin to question the future resale value of diesel vehicles, we see a tipping point where customers will accelerate a move either into hybrid or back to petrol for 181. We want to lead the market into more environmentally friendly vehicles that have significantly less nitric oxide emission than diesel, hence why Toyota was the first brand to introduce a diesel scrappage scheme exclusively to hybrid.”

Globally, Toyota is also driving the market away from diesel, by committing to not making new models with DERV engines. Toyota’s executive vice president, Didier Leroy (seen by many as a potential successor to current boss Akio Toyoda) said at the Tokyo motor show that as current diesel models came to the end of their production lives, they would be replaced by hybrids. “My personal opinion - and this is my personal opinion - is no, we’ll not launch another diesel car” said Mr Leroy, although he declined to comment on what this would mean for vehicles such as the Land Cruiser and HiLux.