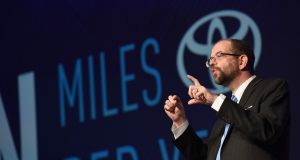 Toyota has hired Google’s former head of robotics and a key executive in the search company’s driverless car efforts, as it predicted that robots could become as important to its future as cars have been to it since the 1930s.

James Kuffner, a Google employee since 2009, was named head of the company’s robotics unit in 2014 when Andy Rubin, creator of the Android smartphone operating system, left the company. Mr Rubin had shaken up the robotics world with his acquisitions of well-regarded start-ups, giving Google a head start in the emerging field of autonomous machines.

The head of Toyota’s new US-based artificial intelligence research labs used the announcement, at the Consumer Electronics Show in Las Vegas, to predict that producing robots could one day become the Japanese company’s main business.

Gill Pratt, a former head of robotics at the US defence department’s research arm, said that the transition to intelligent machines was likely to be as significant as the emergence of the car industry, which prompted Toyota to shift its focus from making mechanical looms.

“It’s entirely possible that robots are going to become for today’s Toyota what the car industry was back when Toyota was making looms,” he said. Robots in the home “may eventually become even more personally prized” than cars are today, he added.

Mr Pratt said that, while the Japanese company had been able to shift its manufacturing prowess to different markets, the rise of robotics presented a different challenge: “Software and data are now essential components of Toyota’s future mobility strategy.”

His comments came on Tuesday as Toyota named Mr Kuffner as part of a team of researchers to lead its new AI research lab in Silicon Valley, as part of its efforts to put down roots in the Valley and turn itself into a world leader in artificial intelligence. The Japanese company has promised $1bn in funding for the lab in its first five years, highlighting the growing importance of software and AI to carmakers.

Other senior hires announced on Tuesday in Las Vegas include Eric Krotov and Larry Jackel, who, like Mr Pratt, had worked at the US Defense Advanced Research Projects Agency, which has played a key role in the US in funding early research in robotics.

Though the companies are tapping the same pool of talent, Toyota has mapped out a path to AI-assisted driving that is very different from the one being pursued by Google. The search company is bent on introducing fully autonomous vehicles as soon as possible, while Toyota argues that humans, aided by an increasing degree of automation, should stay at the wheel for a long transition period.

Mr Pratt threw down an indirect challenge to Google on Tuesday, as he claimed that autonomous vehicles were still a long way from reality and said public demonstrations of driverless cars have not yet shown that the most difficult computing problems have been solved.

Announcing its AI hires on Tuesday, Toyota said its “ultimate goal” was to create “a car that cannot be responsible for a collision”. Echoing the strong focus in the Japanese robotics world of creating machines capable of assisting an ageing population, it added that initial work at the lab would involve finding ways to increase access to cars for people who cannot drive, particularly the handicapped and elderly, and develop new indoor forms of mobility. Mr Kuffner is a specialist in cloud computing.

Toyota also said it had hired two professors from the Massachusetts Institute of Technology, adding to the brain-drain from academia that has accompanied the race among big tech companies to develop robotics capabilities.

In the biggest talent grab so far, ride-hailing service Uber last year hired an entire team from Carnegie Mellon University in Pittsburgh, long a leader in the field of robotics research, to create its own driverless car effort.