Can Ireland play a role in the autonomous car revolution?

With some 100 automotive software firms here, we can leap to forefront of new tech 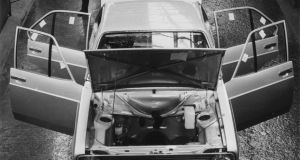 By the time that motor assembly finally came to an end in Ireland in 1984, there were in excess of 100 companies making automotive parts here. This was the final payoff to the tax concessions minister for industry and commerce Seán Lemass had made in 1933 to establish an assembly industry here. At the time, the Irish motor trade was on its knees, destroyed by punitive tariffs on imported cars.

Only Ford was assembling and manufacturing in the infant Irish Free State, and at the suggestion of FM Summerfield, Lemass introduced legislation that gave tax concessions for motor cars assembled here, including a significant reduction in the annual rate of road tax paid by Irish motorists who purchased locally assembled cars.

The real significance of the move was to create not just an assembly industry but also a large number of companies that were established to make the locally manufactured components that were an essential part of the scheme.

Within a very short period of time, tyres, batteries, spark plugs, electrical wiring, paint, glass, springs and a myriad other components were being manufactured here by newly established enterprises.

Over the next 50 years, during which more than 50 different makes of car were assembled here, these companies provided the first significant step away from an agricultural-based Irish economy towards an industrial-based economy. In simple terms, what had then become the Irish Free State had not felt the effects of the industrial revolution and our economy was firmly based on agriculture, a small amount of tourism and just two significant industries, Guinness and Waterford Glass.

In the late 1960s and early 1970s, the assembly industry and the network of small industrial companies that had grown up to supply it, were at their peak, but in 1973 when accession to the European Community was finally achieved, the writing was firmly on the wall for assembly in Ireland.

The industry managed to hang on until the end of 1984, by which time a number of new companies had been established to manufacture automotive components, not just for the Irish assembly industry but, more importantly, for export, and Irish Trade Board data suggests that as many as 100 companies were manufacturing at that time. Quite a few of the biggest players were either American or German owned, most notably the General Motors-owned Packard Electric and the German-owned Kromberg & Schubert, each of whom employed more than 1,000 people at their peak.

Many of these companies did not survive – Packard Electric closed down in 1996 and Kromberg & Schunbert ceased production in 2004 – but others survived and, particularly since the early 2000s, have been joined by a raft of new companies producing higher-value components such as automotive software and electrical systems. Indeed, one company, Kostal, established in 1981 when the end of assembly was in sight, now produces automotive electrical systems for major can manufacturers such as Toyota, Mercedes-Benz and BMW. In addition, its electrical hardware is used by Jaguar and Land Rover and it invested more than €40 million in its plants in Limerick and Cork as recently as 2010.

It’s difficult to be precise about the exact number of companies working in the sector because of crossover with other industries, but it’s estimated that there may be 95 Irish and up to 25 overseas producers based here manufacturing for the world-wide automotive component market.

The next two decades will see enormous change and upheaval in the world’s motor industry. The age of electric and autonomous cars is imminent. Make no mistake, despite the initial disappointing uptake of electric cars, the uptake will be quicker than many might expect. Like every period of great change, this will provide both difficulties and opportunities. It could also provide Ireland with an opportunity to leap to the forefront of automotive technology.

There are perhaps three steps to fully autonomous cars in the future. The first is already significant and is cars using hybrid technology. These cars are already here and are impressively practical in operation. The second step is electric, racing towards widespread acceptance and practicality as battery storage improves, and at this moment we sit on the threshold of very significant improvements in this area. The final step to fully autonomous cars is combining advanced electric technology, but this is more difficult, and it’s perhaps here that there is the greatest opportunity for Ireland.

Given the size of Ireland, it should provide a perfect location for the use of electric cars. Within a very short time, any point on this island will be accessible by electric car without the worry of so-called “range anxiety”. For that reason, we have a unique opportunity to embrace electric cars and to make this the most environmentally friendly landscape on this planet in terms of vehicle emissions.

There’s more. Autonomous cars are currently being developed and tested in several countries, most significantly the United States but the testing challenge their highways present to these cars are far removed from the practical reality of the hazards faced by a car on the roads of this island.

So, why not use Irish roads and situations to develop these car systems? Link this to the development of the software systems required for these cars by Irish companies – the sort of thing we do very well – and Ireland could become a world leader in automotive technology and software.

So, is there a modern-day Seán Lemass who will foresee and understand the desirability of making the first steps to achieving such a role in this rapidly changing automotive world?

Bob Montgomery’s new book, Tracing the History of 50 Years of Motor Assembly in Ireland, is available from major bookshops or directly at dreoilin95@icloud.com