BMW to recall 10,600 cars in Ireland over stalling risk

Electrical fault has been linked to one road death in UK 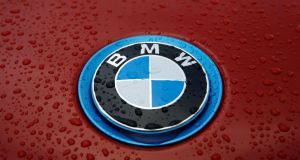 BMW has said 10,602 vehicles registered in the Republic are affected by a recall over a potential electrical fault. Photograph: Reuters/Stefan Wermuth

BMW Ireland has confirmed that 10,602 vehicles registered in the Republic are affected by a recall over a potential electrical fault.

The models in question are the BMW 1 Series, 3 Series, Z4 and X1 petrol and diesel models made between March 2007 and August 2011, according to a statement from the company.

It said it would contact all affected customers by post over the next three weeks advising them of how they can have the fault repaired, without charge.

This comes as BMW said it will recall 312,000 UK vehicles at risk of the same electrical fault that has been linked to a fatal crash.

The UK Driver and Vehicle Standards Agency (DVSA) said last week BMW had failed to alert UK authorities to 19 cases of electrical faults in one of its models.

Former Gurkha soldier Narayan Gurung, 66, died on Christmas Day 2016 when he crashed his Ford Fiesta into a tree in Hampshire while swerving to avoid a BMW car which had cut out due to an electrical fault, an inquest in Woking, Surrey, was told.

An investigation by BBC’s Watchdog Live found the issue could be in a wider number of vehicles than those covered by the original recall of 36,410 cars in 2017.

A BMW spokesman said: “Now we recognise the need to widen the recall to capture a larger cohort of cars. We are widening the net as a precaution.” He added the fault could be fixed within two hours and involved replacing a plug. The firm has not advised customers to stop driving the vehicles.

Mwape Kambafwile told the BBC he stopped driving his BMW 3 Series car after it cut out while he was driving in December 2016.

He said: “I just thought to myself if I was driving on the motorway with my family in the car, that could have been very dangerous. I took it to BMW. The next day they called me to say they had found a fault, it looks like the cable had burnt out and no current was passing through the fuse box.

“I felt so uncomfortable driving it that we took taxis, I walked to work every day. It was a nightmare, it wasn’t safe enough to drive.” Watchdog Live will air on Wednesday at 8pm on BBC One.

A BMW spokesperson told The Irish Times that “a technical action was released in November 2016 which was subsequently turned into recall in 2017. In order to reassure customers this recall has now subsequently been widened and we are working with the Department of Transport to ascertain the full range of affected vehicles in Ireland.

“We will be contacting all affected customers by post advising them of how they can book their car in to have the work carried out. We will commence contacting affected customers in the next three weeks. The work should take no more than two hours. There will be no cost to the customer. Any customers with any concerns or requiring assistance should contact their local Retail Centre or our Customer Care Team on 1890 719 421.”