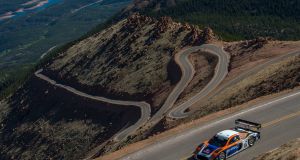 The dogs in the street know Volkswagen should avoid at all cost drawing attention to its emission woes, especially in the US. One would presume motor racing would be a no-no for the brand that gave us dieselgate.

Motor racing in general is in the crosshairs of environmentalists, even the sacred cow of Formula 1 has had to react and run hybrids to cut emissions to prolong its future. So why on earth is the German giant going racing?

Volkswagen’s brand new electric I.D. R racer is going to take on the Pikes Peak International Hill Climb. The famous race against the clock dates back to 1916. There is a lot of kudos to be gained from winning overall, but a category win means a lot also.

Cars and motorcycles of all shapes and sizes endevour to hurtle up the side of the Colorado mountain in the quickest time possible. Drivers who try too hard to climb the 19.99km (12.42 mile) course generally suffer severe consequences. There have been five fatalities to date.

Many fail to reach the finishing line that sits at an altitude of 4,300m (14,115ft). Drivers have to battle through changing weather conditions, but also the summit can literally freeze in June. Then there are the corners, 156 in total from start to finish line.

The dirt road is long gone, replaced by asphalt. This allows cars to run with racing slicks and huge wings. In fact the open class has little or no rules so engineers can create incredible machines that make LeMans cars look positively dull.

The key to Pikes Peak success, apart from driver skill, is running as light a vehicle as possible packed with as much power as possible. Internal combustion engines have to gasp for every last breath of air from the ever thinning atmosphere to produce power.

There is, however, one motor that doesn’t suffer a loss of power at altitude as it doesn’t need to breath air: an electric motor.

To quote Baldrick from Blackadder fame, VW has a cunning plan. What better way to win back some of the customers it betrayed with a stab at the EV record. The car tasked with regaining some integrity on June 24th is the I.D. R Pikes Peak BEV battery electric vehicle, the R is for racing.

The record for the climb up the Colorado mountainside in an all electric vehicle stands at 8 minutes 57.1 seconds by Rhys Millen’s AWD eO PP100, I can’t picture it either, in 2016.

It takes a huge amount of commitment to as the latest breed of prototypes need to be driven hard or they simply won’t deliver enough grip to keep the car on the road.

In 2013 Sebastian Loeb in a 875kg Peugeot 208 T16 smashed the overall record by over a minute and a half. The car featured bits from the Le Mans winning LMP 908 with power coming from a 875hp, V6, 3.2 litre petrol engine. The Frenchman completed the race to the clouds in 8 mins 13.8 seconds, well over 12 minutes quicker than the inaugural winner.

The VW I.D. R Pikes Peak carbon fibre body is clearly styled on an LMP Le Mans prototype form. It is ultra low slung with an enormous rear wing there is no denying this car’s intent. The car is completely new and has been built by Volkswagen motor sport division. VW’s sister company Porsche helped out with the aerodynamics and some wind tunnel time. Two electric motors develop 680hp and 650nm of torque to power all four wheels. The car weighs under 1,100kg with driver and sits extremely low to the ground.

The lack of rules concerning construction means that the car is an extreme machine. The rear wing is outrageously huge and the ground effect looks astonishing. The super sports car runs on special super sticky Michelin tyres. The sprint from 0-100km/h takes just over two seconds (2.25) and that is quicker than a Formula 1 car.

We had a good look around the car at Alès, France where the car will run for the first time and over the next two weeks will get a full shake down. The batteries are air cooled and will be recharged on the mountain using glycerin powered generators similar to those used in Formula E.

A full charge of Volkswagen’s lithium-ion batteries from its plant in Braunschweig takes between 20-30 minutes. A senior VW insider admitted that keeping the batteries cool has been a particular challenge as you go higher as the air gets thinner. Interestingly circa 20 per cent of the electric energy required to run the course is generated during the climb, mostly from regenerative braking. Generators recover and convert some of the braking force into electricity and feed it in to the battery.

Volkswagen will bring one car and a back up to the event with just one attempt at a timed run allowed. Testing is limited to early mornings and certain sections as the road is open to the public on all bar race day from 9am. The electric record is the target but VW is coy about the overall record being under threat.

Over the years rally and endurance race drivers tend to adapt better to the race than the show ponies from other formulas. VW certainly isn’t leaving anything to chance as it has enlisted a three times Pikes Peak winner, two times LeMans winner and 2016 World Endurance champion to sit behind the wheel.

Frenchman Romain Dumas grew up in the foothills of the Alps, so its safe to assume the 39 year old has a bit of hill climbing knowledge in the bank. Like all racers he is lightweight and could be a jockey weighing in at just 60kgs, that’s half a prop forward. In his Swiss home’s mandetory steel lined basement, a throw back to the cold war, sits a high tech race simulator with a racing steering wheel and full six point harness seat that moves via hydraulic actuators to smiulate surfaces.

The powerful computer hard drive allows race circuits to be driven in incredible detail. It goes without saying that the route of the Pikes Peak hill climb is stored too. Dumas spends a lot of time on the machine “I’m very familiar with the route already, but a bit of a refresher never hurts.”

“Volkswagen’s goal is to reach the pinnacle of electromobility with the I.D. family. As such, Volkswagen’s involvement on Pikes Peak not only sets the trend for our future in motorsport, but is also of great symbolic significance in the truest sense,” said Volkswagen board member for development, Dr Frank Welsch. “Customers have always benefitted from the findings made in motorsport, and we expect to take these findings and use them as a valuable impetus for the development of future I.D. models. The hill climb on Pikes Peak will definitely be a real acid test for the electric drive.”