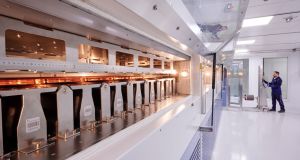 It all started out so well. A decade ago, BMW seemed to steal a major march on its rivals by breaking early into the electric car sphere. First off, it put a fleet of prototype Minis, powered by bulky batteries that took up the entire back seat, into the road and into the hands of regular drivers, to gather data on how electric cars might be driven and used.

That data fed directly into the 2013 BMW i3 – an all-electric small hatchback that used a light, and unique, carbon-reinforced chassis for maximum efficiency. Although it was not especially long-ranged (indeed, BMW sold a range-extender version, with an extra on-board petrol generator for many years) it was fast, agile, even fun. It seemed that BMW had become the leader of the electric car world, before the electric car world was properly a thing.

Since then, things have rather stalled in Munich. The i3 remains in production, but that in itself is almost a defeat. Although its battery range and energy density have doubled in the years since it was introduced, it’s fundamentally the same car, and with no direct replacement in sight yet. Equally, BMW has not yet introduced any other fully-electric model. Oh, it will do – the Mini Cooper S E arrives very shortly, and that will be followed by an electric X3 SUV and, late next year, the electric i4 saloon, but again there is criticism in the air. BMW is going to lose out, say the critics, because it hasn’t gone to the effort of producing a bespoke electric car platform (in the manner of rivals such as Audi and Jaguar). Indeed, so confused did BMW’s electric-car strategy seem, that it was cited as the main reason behind the early departure (ousting?) of its former chief executive, Harald Kreuger.

So, there is something of a perception of BMW having to play catch-up as it opens its new battery competence centre, just a few kilometres down the road from its Munich headquarters. Even then, the very title – battery competence centre – will have the critics circling. This is not a factory that will produce the thousands and thousands of battery packs needed for BMW’s proposed 25 electric or hybrid models that it wants to introduce by 2023. Instead it’s an R&D centre, a home for its battery geeks. Does that compare poorly to Volkswagen’s recent multibillion euro announcement of a battery “gigafactory” near its own Wolfsburg home? Or, indeed, Tesla’s announcement that it’s going to invest heavily to build both cars and batteries in Germany?

Well, maybe. Certainly, there’s a faint air of defensiveness as we enter the halls of this €200-million facility, which will in itself create some 200 new jobs (although that’s against the background of both BMW and its great rival, Mercedes-Benz, making wider job cuts – as many as 6,000 in BMW’s case – to free up funds to ramp up investment in battery and electric car tech). We are brought to the competence centre in a fleet of BMW i3s, and while its silent, rapid, whizzing about in Munich traffic is as pleasant as ever, it’s still a six-year old design, and BMW has no new car to show us alongside its new laboratory.

That, though, doesn’t seem to worry the people within. In fact, BMW’s apparent laggardness in bringing new EVs to the market is actually being touted as a possible benefit. “We have 500,000 electrified cars out on the road right now,” Dr Peter Lamp, one of BMW’s battery experts, tells The Irish Times. “That has helped us prepare for the next step – that’s a huge data set that we have on real-world battery performance, and not many manufacturers have that advantage.” A genuine advantage, one wonders? Or making lemonade out of electric lemons? Lamp is certain on that score: “We definitely see a clear path through to achieving our goals, and we will have a 600km capable EV on sale by 2025. Beyond that, the big challenge is bringing down the cost while driving up the energy density. Until now, as you bring up the energy density, the cost naturally comes down, but once we reach 2025, that will start to change, the relationship will be no longer linear.”

The key to making those cost savings, says Dr Lamp, is a deep-drill understanding of the materials used to make the batteries. According to BMW’s figures, 80 per cent of the cost of building an electric car is the battery cells themselves, and 80 per cent of the cost of the cells is the sheer raw material cost. BMW’s new centre, it hopes, will allow it to make more efficient use of the lithium, the cobalt, the manganese, the copper and the nickel needed to make the batteries.

What matters to BMW right now, it seems, is making sure it’s got the science of making the right batteries for the right cars down pat

The new competence centre is a factory of sorts – it can create batteries from scratch and build them, to production standard, in small batches for prototype work. After that, BMW still reckons it’s better to work with outside suppliers to make the full production batteries, rather than investing in a “gigafactory” itself. “After all,” one executive mentions on the fringes of the discussion, “we don’t make our own steel, or our own plastics.” What matters to BMW right now, it seems, is making sure it’s got the science of making the right batteries for the right cars down pat. After that, others can do the donkey work.

As for the question of platforms, BMW’s new chief executive, Oliver Zipse, also took the time to hit back at those who criticise the company for not developing a unique electric car chassis. “With one platform, you can hit the target,” says Mr Zipse. “You don’t need to compromise, you don’t need a specific architecture. It’s too expensive, and you can get what you need by platform-sharing. There might be a case, in the future, for an electric car with a specific platform, but we don’t see that necessity yet.”

Indeed, BMW has previously told The Irish Times that describing its CLAR architecture as a platform is something of a misnomer. It’s not a flat pancake of steel to which a body and engine are attached, but instead an interchangeable series of components that can be used to make anything from a 3 Series all the way up to the massive X7 SUV, and everything between. The secret, apparently, is to keep the hard-points, the points at which the structure attaches to the assembly line, the same for all models and then, beyond a shared front bulkhead assembly, the platform is fully adaptable, whether you’re talking about petrol, diesel, hybrid, plugin-hybrid, or fully-electric.

There’s also a little offence in BMW’s defence. Both Zipse and Lamp point out that one of the reasons rivals, such as VW, has developed bespoke EV platforms is because “they started late” and didn’t have time to work electric adaptability into their existing car structures. There were also tacit sideswipes for Tesla, as Lamp points out that BMW’s batteries are “never, ever, allowed to go on fire” – a reference to Tesla’s issues with ‘thermal runaway’ battery fires over the years.

BMW was also keen to defend its electric cars and batteries against criticism of an ethical nature. Amnesty International, for one, has been a vocal critic of electric cars’ appetite for rare-earth metals such as cobalt. Most of the world’s cobalt resources are found in the Democratic Republic of Congo, and many mines there are accused of putting workers through intolerable conditions, and using child labour.

BMW’s response is to say that it’s taking total control of its supply chain, from the mine through to the finished car. Between now and 2025, it’s only going to source cobalt (for example) from mines in Australia and Morocco, with whom it has struck agreements to abide by best-practice rules on employee health and safety and child labour laws, as well as high environmental standards. That’s not to say that BMW is ignoring the Congolese mines – it can’t afford to, so it’s set up pilot projects there, in association with BASF and Samsung, to work with small mines on best-practice plans, and hopes to spread those projects out wider in the coming years. Still, the supply of cobalt (and lithium) will be a serious issue for the electric car revolution in the years to come – BMW says it has secured supply up to 2025, but after that it’s anyone’s guess if there’s sufficient metal in the ground to meet demand. One hope is recycling – 95 per cent of current batteries can be recycled – but there are question marks over the quality and longevity of the recycled products that still need to be answered.

So, where does that leave BMW? Well, for now, it leaves it still selling the i3 a decade-old design, and a small hatchback with the price tag of a 3 Series saloon. It’s a fab little car, but not cheap, and still lacking the ultimate range of some rivals. The new electric Mini will at least give the i3 a bedfellow, but it too is a pricey (albeit slightly less so) small car with a maximum range of 300km. What BMW lacks, at least until the i4 saloon, iX3 SUV, and iNEXT SUV arrive between now and 2023, is a credible rival for the likes of the Tesla Model 3, or the Audi e-Tron quattro, or Jaguar I-Pace, or Mercedes-Benz EQC. That early experience of EVs has, probably, given BMW all the knowledge it needs. It just now needs to turn that knowledge into cars it can sell.

Mr Zipse is bullish, though: “We are the e-mobility market leader right now, certainly in Germany” he says. “And I would expect that to continue.”