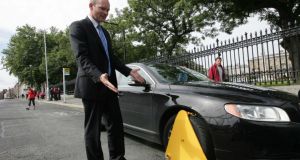 Motorists who have been victims of the worst excesses of unscrupulous clampers will find great satisfaction in the Regulation of Vehicle Immobilisation Bill 2013.

The new legislation, to be introduced in the Oireachtas later this year, will put restrictions on the activities of clampers, establish an appeals system for motorists who feel unjustly clamped and, crucially, set a cap on how much clampers can charge to release a vehicle.

An Oireachtas committee was last year tasked by Minister for Transport Leo Varadkar to report on the issue in preparation for drafting the Bill. In a series of hearings it was presented with evidence of clamp release fees averaging €100-€120, but reaching €180.

It also heard reports of drivers who had serious complaints, not only about the fees, but the behaviour of clampers and companies that had contracted them. The word “cowboys” was frequently used.

Motorists claimed to have been clamped when there were no signs to indicate any parking restrictions; of waiting several hours to be released; and of having been clamped at their apartment complexes because of disputes over management fees.

The committee made recommendations to end these practices, and most have been incorporated into the heads of the Bill, published this week. However, the committee’s position on fees will not, it appears, be adopted.

The committee recommended that minimum and maximum charges be determined nationally and that local authorities be allowed to choose the point on the scale most appropriate for their area. Instead, the National Transport Authority, as regulator, is to set a national release charge. Mr Varadkar has indicated he sees the €80 fee charged in Dublin city as appropriate.

Committee member Sinn Féin TD Brian Stanley said there was good reason for recommending variation. “Portlaoise is not Parnell Square. I would draw the comparison with the taxi industry where a national rate was set which doesn’t suit regional towns or rural areas. Local authorities know what’s right for their areas.”

An hour’s on-street parking in Portlaoise town costs €1, on Parnell Square Dublin, it’s €2.90. Mr Stanley argues that clamp release fees should be commensurate, and hopes this change will be made to the final Bill.

At the other end of the scale Dublin City Council sees €80 as about €50 too low. The fee was set in 1998 and does not cover the cost of running the service, which the council subsidises by €2.7 million annually. The council has asked Mr Varadkar for the power to increase the charge, but he declined.

Coronavirus: Can we get a caravan park fee refund because of closure?
8

‘I saw young girls get kicked, hit, sprayed and dragged off gasping for air’
Real news has value SUBSCRIBE