Virus may be attaching itself to airborne particles from exhaust fumes 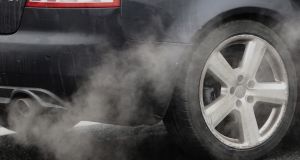 The research, carried out by the universities of Bologna and Bari, has raised the possibility that the Corona-19 virus cells could attach themselves to the tiny particles of soot, the infamous ‘particulate matter’ which is part of the exhaust fumes of passing vehicles

Higher levels of air pollution could be worsening the effects of Covid-19, while Italian researchers have raised the possibility that the virus could be hijacking airborne soot particles to remain in the air for longer.

The research, carried out by the universities of Bologna and Bari, has raised the possibility that the Corona-19 virus cells could attach themselves to the tiny particles of soot, the infamous ‘particulate matter’ which is part of the exhaust fumes of passing vehicles.

Such particulates have been coming under increasing scrutiny in recent years, as part of the general debate over the use of diesel fuel. Increasingly tough legislation has seen exhaust filters, designed to trap such particles, fitted to the exhausts of almost all new cars, including models with petrol engines, but older vehicles will still continue to spew particulates for some time.

The Italian suggestion that Covid-19 is attaching itself to particulate matter and using that as a sort of transport to the human lung work is more of a hypothesis than a solid theory for now, but there is certainly a correlation between the high mortality rates seen in Wuhan in China, and the Lombardy region of Italy, and the air pollution levels in those areas.

These particles are tiny - less than ten microns across (a human hair some fifty times thicker) - and so are easily absorbed into the lungs. For decades, they have been known to be cancer-causing, but their potential relationship to the virus is less well understood.

Work by the New England Journal Of Medicine seems to back up the Italian research, although only to the extent that it confirms the correlation between high levels of air pollution and the faster spread of Covid-19. The Journal suggests that the relationship may be more complex than simply having the virus float along on airborne particles.

It could be that the way the pollution triggers other interactions with the surrounding air, or incoming sunlight, is possibly protecting the virus from such things as would normally destroy it out in the open - ultra-violet light for example. An analysis of the data by the Italian Society of Environmental Medicine (SIMA) found that particulate matter concentrations between February 10th and 29th coincided with contagion of Covid-19 up to March 3rd.

The suggestion that Covid-19 has been using particulate matter as a form of transport has been rubbished by some, notably the Italian Aerosols Society, which said that the interaction simply ins’t sufficiently understood. Then again, it’s possible that the virus doesn’t need any direct help from airborne pollutants - the pollution could have done enough to worsen the effects of the virus all on its own.

According to environmental lobby group Transport & Environment (T&E): “Poor air quality has been shown to cause hypertension, diabetes and respiratory diseases - conditions that doctors have started to link to deaths from the pandemic.”

The effects of air pollution - the triggering of respiratory disease, the weakening of immune systems - is what gives any virus the best chance of killing a potential host. Emissions from fossil fuel cars weaken the resilience of those with chronic lung and heart conditions, the European Respiratory Society (ERS) warned.

“Even the latest diesel engines emit dangerous levels of pollution. Patients with chronic lung and heart conditions caused or worsened by long-term exposure to air pollution are less able to fight off lung infections and more likely to die. This is likely also the case for Covid-19. By lowering air pollution levels we can help the most vulnerable in their fight against this and any possible future pandemics.”

Even without a pandemic virus sweeping through the population, some 400,000 deaths every year, across Europe, are linked to air pollution according to the European Environment Agency.

The lockdowns currently being experienced may be helping to stop the spread of the disease not merely through reduced person-to-person contact, but also through reductions in local air pollution. Satellite images of northern Italy have shown a dramatic fall in the amount of nitrogen dioxide in the air, as traffic has been so reduced.

“The air may be clearing in Italy, but the damage has already been done to human health and people’s ability to fight off infection,” said Sascha Marschang, acting secretary general of the European Public Health Alliance. “Governments should have tackled chronic air pollution long ago, but have prioritised the economy over health by going soft on the auto industry. Once this crisis is over, policymakers should speed up measures to get dirty vehicles off our roads. Science tells us that epidemics like Covid-19 will occur with increasing frequency. So cleaning up the streets is a basic investment for a healthier future.”

What a heavenly home: from dilapidated church to chic retreat
5

‘Oh my God, how do you stand there and know that the whole nation is looking at you?’
8