Roomy, stylish and a doddle to drive in tight city streets, the i10 epitomises why this format is a hit in many urban markets 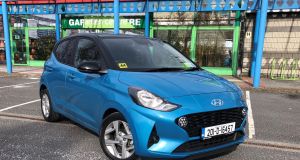 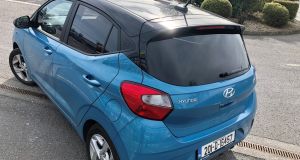 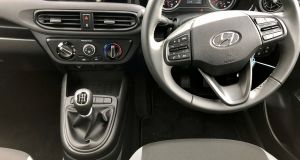 Hyundai’s smallest model, the impressive i10, is one Ireland’s most popular city cars. Congratulations to the Koreans, but that still needs a little context. It’s like being Ireland’s best tobogganist.

Roomy, stylish and a doddle to drive in tight city streets, the i10 epitomises why this format is a hit in many big urban markets.

Yet Irish motorists seem immune to the lure of these impressive little cars when compared to European or Asian counterparts. What’s the source of Irish apathy towards city cars? Are we not really as urban as we like to make out? Are we really more Montana than Madrid when it comes to motoring tastes?

On the demand side, it’s down to price, which, due to Ireland’s tax regime, usually starts at over €15,000. You can get a sizeable low-mileage used model for the same price as these little run-arounds.

On the supply side, it’s the relatively low profit margins. Just because city cars are meant to be a bargain doesn’t mean they can cut corners on either safety or luxury features.

A quick glance at the list of standard features on this new Hyundai will raise eyebrows. Never mind the likes of ABS braking, six airbags, ISOfix child seat anchors or electric windows. That’s all old hat in here. Every new i10 now comes with cruise control, lane keeping assist, electronic stability control, an active collision avoidance system, and a host of convenient entertainment features, including an E-Call alert system to emergency services in the event of a serious incident. It automatically calls emergency services if you’re in an accident and the airbags deploy.

These are features that only a few years ago were being lauded by luxury German brands as spanking new options to their €50,000 cars. The speed they’ve arrived as standard on a €15,000 city car is astonishing.

But back we go to that sticker price and you start to realise that the buyers of these cars demand these sort of new tech, while the safety features are demanded by EU authorities. All this tech leaves little leeway when it comes to price, or more importantly an incentive for the importer, dealer or sales staff to sell these cars unless they can be sure of big volumes.

It’s a shame that Irish buyers opt to miss out on these cars. The beauty of the city cars is their nimble nature on the roads. Even the average family hatchback – and certainly the average crossover – seems lumbering and unwieldy compared to little cars like the i10. Weaving your way through traffic is a doddle and even the ludicrously tight city car parks, designed to destroy alloy wheels at every turn, offer no challenge to the i10 and its ilk.

Hyundai has fitted its i10 with a 1-litre 66bhp petrol engine. It’s an eager little powertrain at low speeds, but it struggles out in the open road, with a sluggish 0-100km/h time of 14.3 seconds, that feels as slow as that sounds when you kick down at speeds over 80km/h.

It’s a shame that the car isn’t offered in Ireland with the company’s more potent 1.2-litre petrol engine as an option. But then that goes back to the market size: if you don’t sell big numbers then why increase the offering, which will make the car uncompetitively priced?

As already outlined, the equipment levels on the i10 will surprise even the most cynical car buyer, particularly if you haven’t been keeping up with the tech developments arriving on the new car market over the last three years.

We’re not going to repeat the list again, but consider this little feature: Driver Attention Warning. This system was lauded by Mercedes a few years ago as a lifesaver, monitoring the input of the driver to see when reaction times were starting to slow and suggesting a short rest. Or consider the emergency stop signal monitor that alerts you if you don’t seem to be reacting to a stop sign. All have Bluetooth phone connectivity.

Of course, some of the tech isn’t worth the cash. There are three grades of i10 - two in reality as the entry grade has limited availability. The top two are called Deluxe and Deluxe Plus, which is a terrible naming convention that makes them sound like Aldi desserts with extra whipped cream.

Taking the middle grade as the best to buy, the price is €16,245. Spend an extra €1,000 and you get an 8-inch touchscreen, Apple Car Play/Android Auto, wireless charging and a reversing camera. For a car in a price sensitive market, it’s not worth the money. Nor is €400 for a two-tone paint job on the roof. But the middle grade i10 is well worth the money, if you’re looking for an urban runaround.

And even if that price is too rich for your budget, the good news is that a lot of the small city cars landing on this island are being bought for the rental market. They’re ideal for tourists visiting the country and looking for something safe and easy to drive in a country where they don’t know the roads and have to adjust to right-hand drive.

When these cars have done their tourism duty, they then hit the market at a far more competitive price for Irish buyers. And that’s where the real bargains can be had.

Cars such as the little i10 may seem small, but their loaded with features to rival many models at twice the price and if you do live in town with limited parking and heavy traffic, you’d be mad to miss out on the option of these cars.

Verdict: A surprisingly well-equipped urban runaround that shouldn’t be ignored by suburban motorists

Property market: Is now the time to buy?
7