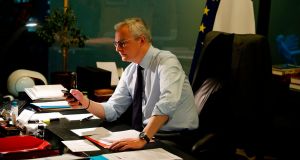 The 19 finance ministers of the euro zone failed to reach agreement in marathon overnight talks on how to rescue the continent from a steep downturn expected as a result of the coronavirus.

A press conference to announce an agreement was delayed until Thursday, after already having been postponed to Wednesday morning from Tuesday, to give the ministers more time to agree.

There is deep division over how to respond. Italy is adamant that joint debt issuance in the form of so-called eurobonds or coronabonds is needed as a collective and resolute response to a crisis that has pummelled its already weak economy, a proposal backed by eight other states including Ireland, France and Spain.

But this is fiercely resisted by states including the Netherlands where there is deep public opposition to shared debt obligations, which are seen as handouts to spendthrift states, in a division that recalls the standoffs of the euro zone crisis of 2011.

Talks stretched into the early hours of Wednesday morning before being called off until Thursday. France and Germany issued joint appeals for compromise to break the deadlock.

“After 16 hours of negotiations, no Eurogroup agreement on the economic response to the coronavirus crisis. We resume tomorrow,” wrote French finance minister Bruno Le Maire. “Together with Olaf Scholz, we call on all European states to rise to the exceptional challenges to reach an ambitious agreement.”

“In this difficult hour, Europe must stand together. Together with Bruno Le Maire I therefore call on all euro countries not to refuse to solve these difficult financial questions and to enable a good compromise - for all citizens,” Scholz wrote.

Dutch finance minister Wopke Hoekstra said the Netherlands remained resolutely against shared debt obligations, and that there was no majority in favour of them.

“We think this will create more problems than solutions for the EU,” Hoekstra wrote. “We would have to guarantee debts of other countries which isn’t reasonable.”

Italy’s finance minister Roberto Gualtieri insisted that an exceptional step was necessary for a response that was “up to the challenge of Covid-19”.

“Now is the time for common responsibility, solidarity, and coragious and shared choices,” he wrote.

Instead of joint debt, northern states have backed using the euro zone’s bailout fund the European Stability Mechanism (ESM) as a lender for states that are in trouble.

In past bailouts, such loans have been conditional on the borrowing states imposing austerity measures to bring down public debt, which fiscal conservatives view as essential to ensure past mistakes are not repeated.

Such conditions are a red line for Italy, where years of austerity and economic stagnation have made the idea of the ESM politically toxic.

But this has not been enough for Italy which is holding out for a sweeping gesture it sees as essential to counter public disillusionment with the EU, fed by a sense of abandonment when fellow member states failed to respond to its emergency appeal for supplies as the pandemic hit it hard in February.